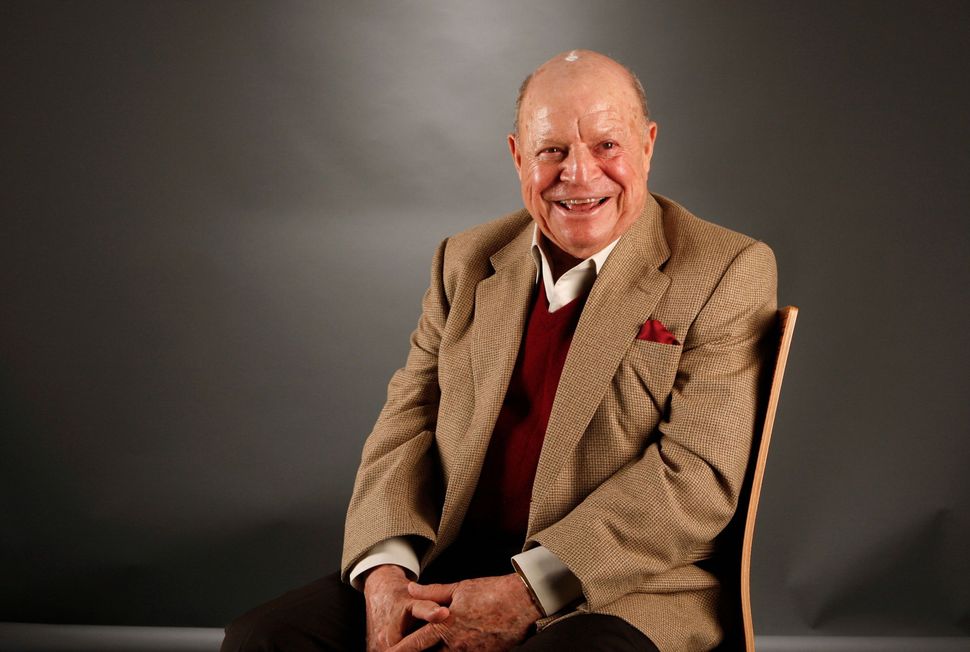 Don Rickles, who died on April 6 at age 90, weathered over a half-century of comedic trends, seeing his insult humor absorbed into everyday conduct. He was not always an insult comedian. Raised in the Jackson Heights area of Queens by his parents, Max Rickles and Etta Feldman, Rickles studied at the American Academy of Dramatic Arts after war service. Finding acting jobs scarce, he tried stand-up comedy in the late 1940s, as fellow comedian Will Jordan recalled in an interview in 2014. Circa 1949, Rickles’s act made fun of people sneaking a smoke in movie theaters, where it was forbidden. Then Rickles noticed the laughs won by Jack E. Leonard, (1910–1973; born Leonard Lebitsky), a heavyset, multitalented jokester whose act included razzing the audience. Jordan recalled: “Rickles never looked like he copied anyone other than Jack E. Leonard. He was a little more caustic. Coming later, his style was more caustic. By then, the public wanted it more caustic.” Another comedian, Jack Carter (born Chakrin; 1922–2015), noted in 2011 that the genial Leonard claimed that Rickles “stole my bit! Stole everything that I do!” The difference between Leonard and Rickles, according to Carter, was that the former “didn’t go for the throat like Rickles did.”

The crushing persistence of Rickles in his prime is to be marveled at. Relentlessly going for the jugular in a November 1981 appearance on the TV program of Irv Kupcinet, a Chicago media institution, Rickles derides his host’s nose, wife, on-camera habit of consulting notes, and every other action or reaction to his barrage of aggressive comments, as other guests guffaw nervously. This duel to the death aspect of Rickles’s routine was something new, making his longtime theme song especially appropriate: “La Virgen de la Macarena,” a traditional bullfighting melody for virtuoso trumpet. This ultra-Catholic tune, written in honor of a 17th-century wooden image of the Virgin Mary in Seville, Spain, suited the Jewish comic’s blunt assaults. The degree of intimidation and relief experienced by teased audiences was at a devotional level.

The born-again Christian Johnny Cash announced on television in 1981: “I love Don Rickles. I think he’s a great spiritual leader. See, when he looks at you and talks to you, you think he’s going to kill you for a minute, and then he doesn’t.”

Yet Rickles always made his origins explicit. In May 2010, Howard Stern asked Rickles whether he was a “super-religious guy.” Rickles replied: “No, but I’m a great believer in the faith; my background is Judaism. My mother and father were very active in temple. We’re Conservative Jew,s and I follow as much as I can.” Stern insisted: “You wrap tefillin? Do you celebrate Shavuot?” To which Rickles responded: “No, come on, how about shish kebab?” Further questions followed about whether Rickles built a sukkah every year (the answer was no) and if he spoke Hebrew (“What am I, an Israeli fighter pilot?”). Rickles admitted he could read Hebrew and daven, adding: “Kiss my tallith, I didn’t know you knew so much.” As a latter-day badkhn, a comedian who entertains guests at Ashkenazi weddings, Rickles expressed concern with the community, however hidden the social value of his comments might be.

The rapport of Rickles with his public was pre-literate, akin to schoolyard bullying. He would brag about never preparing his act ahead of time or employing a writer. By no coincidence, the one-liners listed among his best in memorial articles rarely retain much effect. Some of his explosions featured disordered grammar, with the element of surprise deriving from the words chosen. Spontaneity was all to Rickles, although he repeated the same act over a half-century. His wit reminded listeners that the term “spur-of-the-moment” originally alluded to driving a sharp goad into the side of a horse to achieve speed, describing something unplanned, impulsive.

Acute pain was avoided by such spurring, because in Rickles’s insult comedy, victims were aware of belonging to a closed group: an audience that paid to see him, or an inner circle of showbiz celebs. To be insulted by the comedian was a prized form of recognition, proof of arrival among one’s peers. Being derided was better than being ignored. Acting professionals were especially drawn to the live theater emotions of each performance occasion.

On occasion, the jokes did not go over well. In June 2012, his comment, “President Obama is a personal friend of mine. He was over to the house yesterday, but the mop broke” was censored from an American Film Institute broadcast. Casting Obama in the role of janitor was part of Rickles’s hoary routine that any person of color present on the dais of a celebrity roast was there to clean up. Some African Americans, Italian Americans and others were tickled by such gags, in part because they fit a familiar tradition of humorous insults. The dozens, an exchange of insults as a game or ritual among black Americans, are even more potentially damaging than Rickles’s act as a mutual exchange. The comedian’s shtick was basically a one-way street, since few could match his verve.

Rickles was seen as affectionately enacting a caricatured version of ideas about minorities many white people were suspected to hold but might not express in polite society. As years went by, celebrity roast culture infected the American polis in ways that cannot be blamed on Rickles, even if he did help popularize the format. Roasts were increasingly staged, mocking celebrities for whom little or no affection was felt, removing the basic fondness, esteem or even love behind the insults. At the same time, showbiz aspects of politics developed into a precise identification of showbiz with politics and vice versa, after the advent of Ronald Reagan. This degenerated into today’s witless, humorless invective launched by some politicians on Twitter. Targets may not be celebrities, but civilians who, unlike Rickles’s audiences in Vegas, did not ask to be pilloried. Nor do these attacks include Rickles’s inevitable maudlin coda, reminding audiences with heavy sincerity to love their mothers, or assuring rich and famous stars that they are “special” and “blessed.” Rickles’s blatant, unchanging act cannot be blamed for America’s poisoned societal discourse. He merely advanced an art already present in the entertainment industry, bringing it new prestige and visibility through his friendships with superstars in the Rat Pack and late night chat show hosts. Those who knew him offstage speak only of kindness, shyness, gentleness and generosity. Rest in peace, hockey puck!