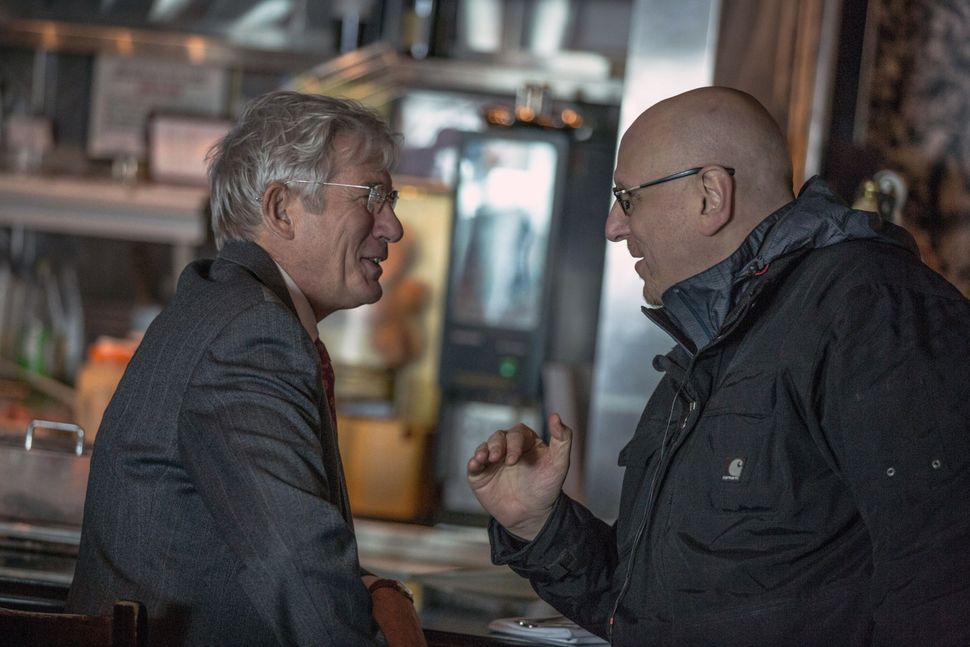 You already know Norman Oppenheimer. He’s the guy no one can remember inviting to the party, and yet here he is, handing out business cards and offering to put you in touch with one of his many well-heeled connections. Or he’s pressed against the velvet rope on a rainy night, insisting he’s with the band.

Norman is the producer without website, investor without portfolio; he’s the guy who looks like he never belongs here — because he doesn’t. Part groupie, part swindler, part self-appointed guardian angel, he promises you that he just wants to help, but you’re not sure that the kind of help is offering is safe, moral, or even legal.

Yes, you know Norman, and maybe you even know enough to steer clear of him, but until the new film that bears his name, you’ve never heard Norman tell his side of the story. Israeli-American Director Joseph Cedar (“Beaufort,” “Footnote”) offers his take on the maligned stereotype within an irresistible specificity: the relationship between a shady New York fixer (Richard Gere, in one of the most nuanced and moving performances of his career) and Eshel, an up-and-coming Israeli politician (and Lior Ashkenazi).

Cedar spoke with the Forward’s Sheerly Avni from Israel about the joys of working with Gere and the real-life inspiration for Norman Oppenheimer, perhaps the unlikeliest cinema hero of 2017.

SHEERLY AVNI: Whom did you originally base this character on?

JOSEPH CEDAR: Joseph Süß Oppenheimer, a court Jew in Germany in the 18th century. He achieved that position by buying a man a coat. That man, Karl Alexander, eventually became a duke, and when he did, he invited Oppenheimer to be his financial consultant.It’s the classic court Jew narrative: A Jew finds a way into the close circle of someone in power, helping that person in power achieve the things he wants to do, while creating antagonism among all the people he’s just bypassed. He was eventually executed. Leon Feuchtwanger turned his story into an amazing novel in 1925. Then it became a British film in 1936, and then finally remade into the 1940 Nazi propaganda film “Jud Süß.” It is the anti-Semitic stereotype of the Jewish operator. I shifted it to a contemporary modern setting, and with a little bit of a wink toward the whole thing, made the man in power an Israeli.

Eshel, the politician whom Norman “befriends,” is the opposite of Norman. He’s a charismatic, charming man who, even when he is seems down and out, is clearly one of the winners.

Those of us who feel welcome anywhere usually take it for granted. It’s a good feeling to walk into a place and know that you are wanted. Norman doesn’t feel that anywhere. He’s not welcome. He’s trying to get involved in something he’s not invited to get involved in. He’s someone who always seems to have an ulterior motive, and it’s natural to want to push people like this away.

It makes Richard Gere’s performance even more incredible, since one would expect to see him in Heschel’s role.

Richard is a fantastic and very brave actor. It’s not the obvious character for him. He is extremely comfortable with himself and feels like he belongs and has the power to influence his environment. So once we started working, it became this beautiful artistic challenge for him — finding the “Norman” in all of us. It was one of the best processes I’ve had with an actor.

Did you start out the project thinking you were going to show us a more likeable Norman?

The movie became a movie only when I found out that not only do I love this character, I also respect him. It didn’t start out that way. There was a point in the writing where I realized that that’s how I feel about him — and that’s how the story became something that had a beginning, a middle and an end. Before that it was just another negative portrait. This story is a statement of defense for this character. He’s been treated badly in literature and in film, and hopefully I’m giving another point of view on what makes this man tick, how he functions and why we should have some sympathy toward him, even when he’s so aggravating.