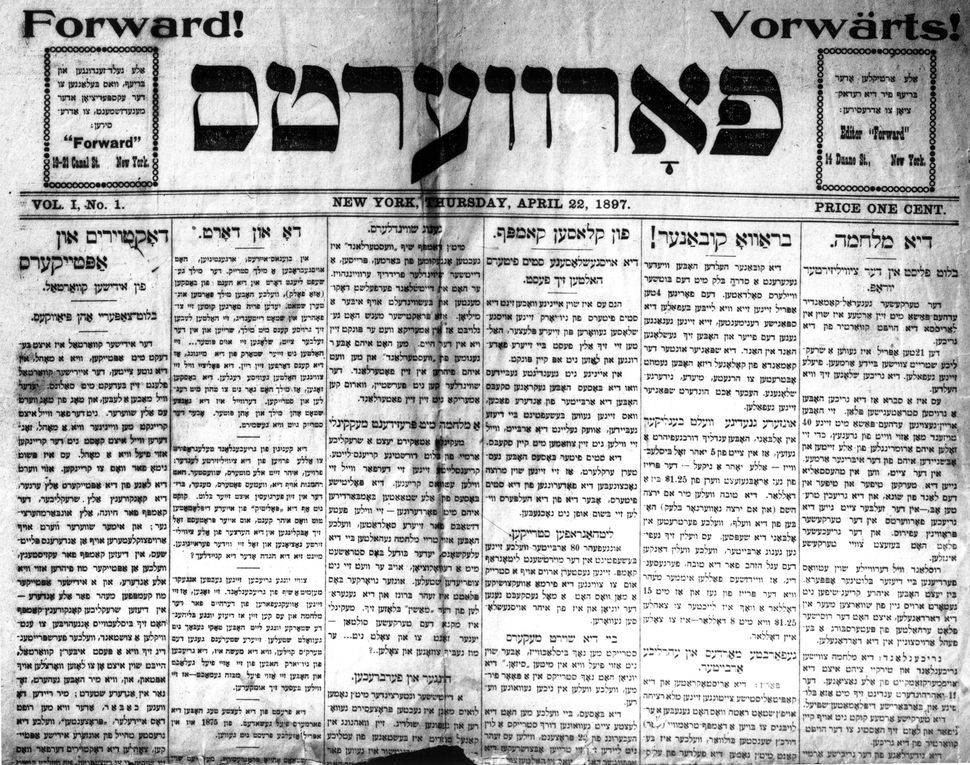 Front Page News! The very first edition of the Forverts, in 1897. Image by The Forward Association

The year 1897 was a momentous one in Jewish history. Theodore Herzl attended the First Zionist Congress in Basel, Switzerland, giving birth to the movement that founded the Jewish State. In Vilna, a group of socialist activists met in secret to create a Jewish workers association that became known as the Bund.

And, on April 22, the Forward published its first edition, a one-page sheet in Yiddish that cost only a penny and, under the long, brilliant leadership of founding editor Abraham Cahan, grew to be at one time the largest newspaper in any language published in New York.

As we embark on a yearlong celebration of the Forward’s 120th anniversary, we begin by looking back to that very first issue. Only the top half of the front page survives, but jammed onto that delicate piece of news print was a lot of news, written from the perspective of Jewish immigrant workers who held fast to the socialist notions of their time. “From the Class Struggle: Locked Out Steamfitters are Holding Fast,” blared one headline. “Enough Swinders!” declared another.

There was a story about the Greco-Turkish war that had begun earlier in the month and would last for 30 years, and a report on President William McKinley’s foreign policy. Perhaps most curious was a story entitled “Bloodletting Without Leeches,” which decried the rapacious practices of doctors towards pharmacists in what was known as the “Jewish quarter,” written in the feisty tone of an outraged advocate.

“The struggle to make a living is merciless,” the Forward story said, in a translation provided by my colleague Chana Pollack. “In this terrifying competitive battle, a situation slowly developed and is spreading like a plague through the Quarter with roots headed Uptown as well… We’re talking bribery here, or in more genteel terms ‘percentages,’ that most Jewish pharmacists pay doctors to be sent prescriptions.”

The first edition was produced from a rented space on Duane Street in lower Manhattan, and the printing was outsourced. “I earned 15 dollars a week as Editor,” Cahan later wrote in his memoirs, “and payment wasn’t always guaranteed.” 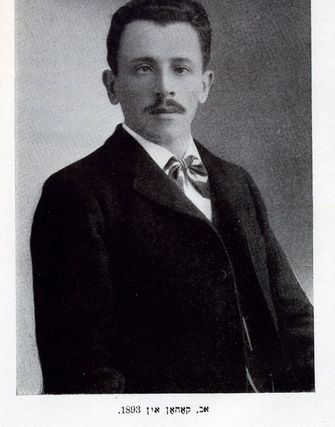 By 1911, the Forward had grown so secure and popular that it was able to afford its very own building. While laying the cornerstone on 175 East Broadway, Cahan said: “The new house will be not merely the home of the Forverts, but rather a center of our entire movement. Jewish workers, this is your temple! This is your ‘Forverts!’ Your flesh, your blood, your brain, your heart! Editors and managers change, move on, board members go away and new ones take their place. The Forverts changes. But our mission never does, for it belongs to you.”

Cahan was prescient and visionary. In the 120 years since this not-for-profit newspaper was founded, it evolved from a Yiddish daily to include an English weekly and now to a digital publication in both languages read around the world. But the mission to serve the Jewish people with incisive, independent journalism has never wavered. Every week during this auspicious anniversary year, we will share with you another fascinating story from our archive — a window into our history and an example of the journalistic mission that remains relevant today.