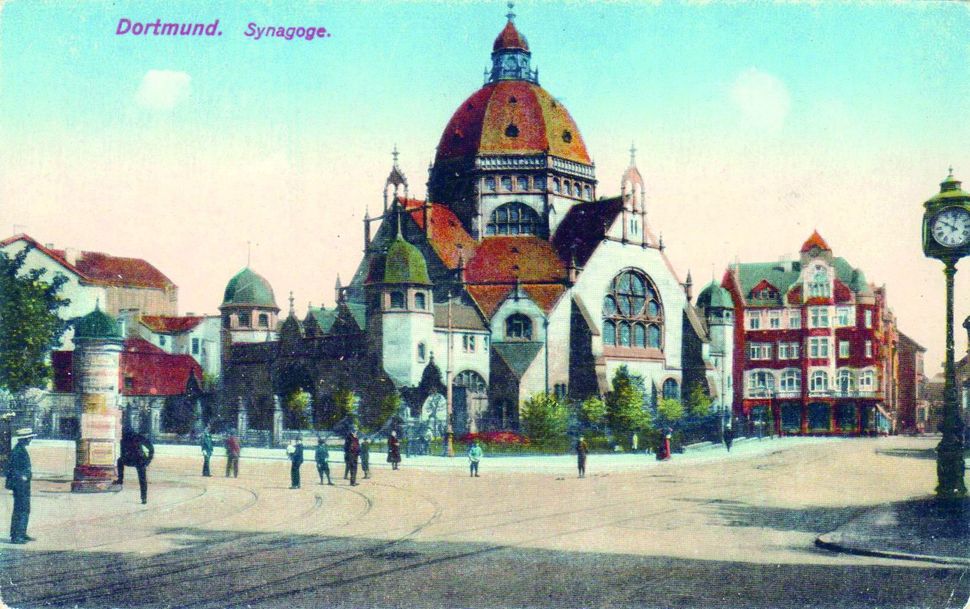 A synagogue in Dortmund Image by Museum at Eldridge Street

The sanctuary of the Great Synagogue in Lodz was probably not, in actuality, sour-apple green. Yet in a late 19th- or early 20th-century postcard showcasing the synagogue’s interior, colorized with an outré enthusiasm, a chandelier and sections of the bimah are the color of a doctor’s-office lollipop.

That candy-tinted symbol of times past might, when applied to a different subject, elicit some nostalgia. But the Great Synagogue in Lodz, destroyed in 1939, is now a parking lot. A stone memorial commemorates the site, the last trace of the building — fluorescent interiors or not — that’s left. 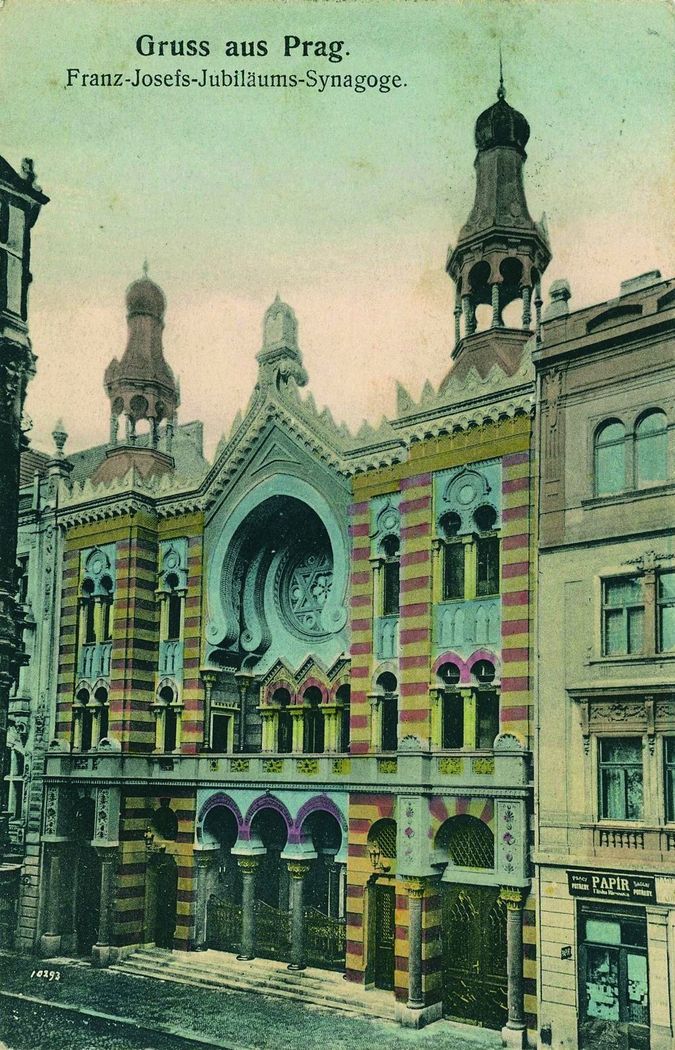 The Jubilee Synagogue in Prague. Image by Museum at Eldridge Street

The fate of the synagogue mirrors that of the community that worshipped in it: In Lodz, only 10,000 members of what was once the second-largest Jewish community in Poland, with an estimated population of 230,000, survived the Holocaust.

The Lodz postcard is one of 14 featuring Polish synagogues included in the recently opened exhibit “Lost Synagogues Of Europe” at the Museum at Eldridge Street on New York’s Lower East Side. Poland is far from the only country represented; there are clusters of postcards showing synagogues from Germany, Vienna, Prague, Hungary, Bohemia, Slovakia, Romania, Moravia and Ukraine, as well as cards bearing images of daily Jewish life in those cities and countries. 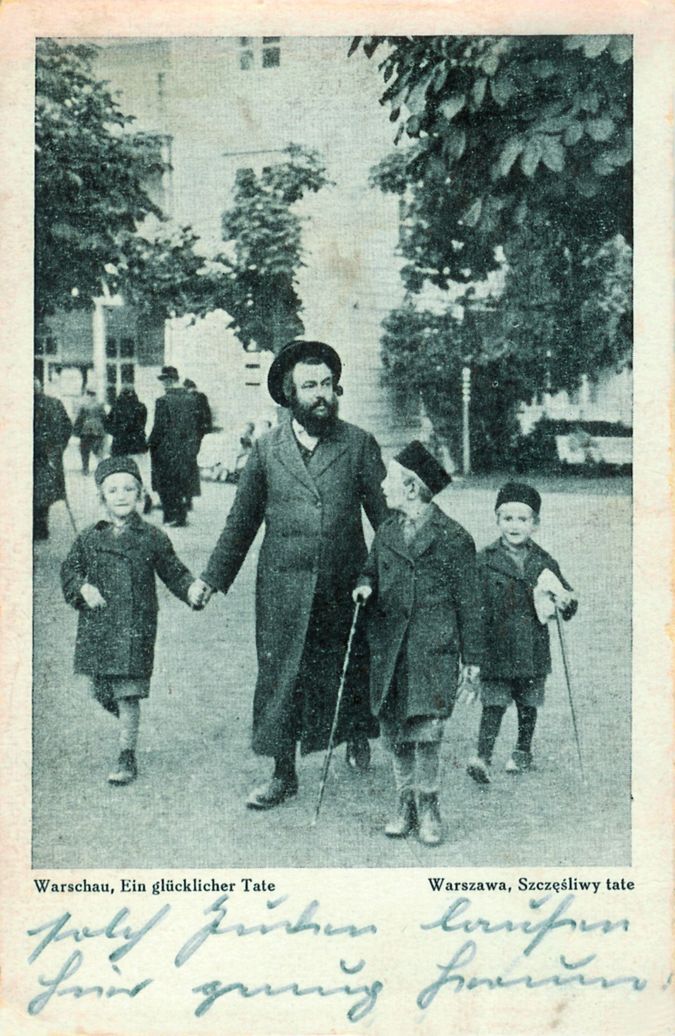 A father on his way to synagogue in Warsaw, circa 1930. Image by Museum at Eldridge Street

“There [are] 156 synagogues represented,” curator Nancy Johnson said. “57 are still standing. Of those, only 14 are still synagogues.”

For those whose Holocaust education was primarily focused on the event itself — Jews either deported to camps and ghettos or living in hiding — the exhibit may be a surprise. European Jews did face persecution and expulsion from a number of countries over the centuries preceding the Holocaust, but they also spent centuries living openly, crafting communities that reveled in, rather than attempted to hide, their culture and religion.

“There’s one [synagogue] that was standing since 1270,” Johnson said. (The building in question, Prague’s Old New Synagogue, is still functioning.) “It’s centuries and centuries of history that in many cases was cut short.” 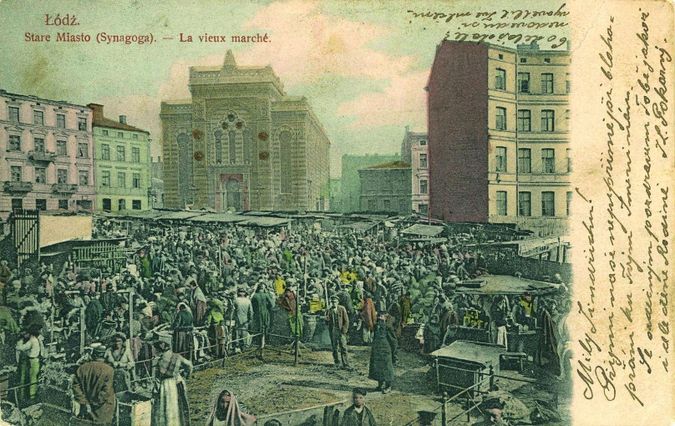 The Synagogue and Market in Lodz, circa 1912. Image by Museum at Eldridge Street

The postcards are replicas of those in the collection of Franišek Bányai. Raised in the former Czechoslovakia under communism, Bányai, whose parents were survivors of Auschwitz, had no Jewish upbringing.

As he grew older, and the Soviet Union collapsed, he became increasingly interested in Jewish life.

“He was looking for a way to connect with his Jewish past,” Johnson said.

In many of the postcards, synagogues rise commandingly over public spaces. Architecturally, many look almost like churches, except for key details: Stained-glass windows or finials — decorative elements mounted on the tops of buildings — featuring Jewish stars, or distinctive Moorish keyhole windows, used to distinguish Jewish religious spaces from their Christian fellows.

In images of everyday life, men stroll the streets in traditional garb, or study and pray in synagogue. In one striking photograph, two bearded men, faces covered by tallit, deliver the blessing of the kohanim, those of the priestly class in the synagogue. 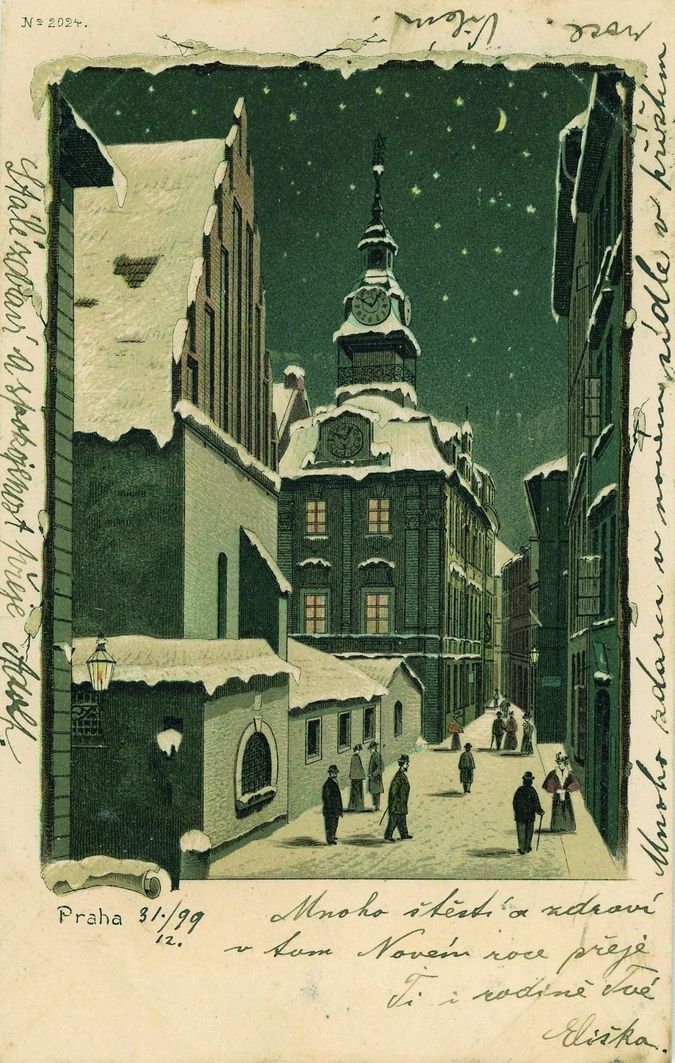 Only one woman appears in the images, a reminder of those lost communities’ strict gender-based divisions. Women would not have been allowed to study, pray or participate in the same communal life as men.

At the Museum at Eldridge Street, the exhibit happens to be unintentionally deft in terms of timing. In the United States, synagogues have been making unexpected headlines, as they’ve been targeted by anti-Semitic and Holocaust-denying vandalism in the months since Donald Trump’s election.

“We suspect that the current anti-Semitic climate in the country has ironically made it the kind of exhibition that seems more relevant to some people,” Johnson said.

Looking at the postcards, the instinct to reconnect with a destroyed Jewish past finds two realizations: One sobering, one joyful.

Sobering: While we each like to imagine we might have changed specific historical outcomes, we tend to see the events of the past as inevitable. It’s easy to think of European Jewry’s fate, often taught through the broad strokes of the Holocaust and Spanish Inquisition, as nearly pre-destined. Yet the members of those communities didn’t imagine their lives that way. They invested in their community, in the form, for instance, of elaborately crafted synagogues, for a reason.

Joyful: For all that Jews, as a people, lost in the past century, Jewish culture has remained continuous, if not unchanged. (Some of those changes, for many, are at least partially positive: This Jewish woman was glad, as a kohen, to bless her synagogue last Rosh Hashanah.) That fact will never mitigate the Holocaust’s fatal, dreadful blow, but it can, and should, provoke some gratitude.

There’s an undercurrent to those responses that urges a necessary empathy. European Jews could neither fully anticipate the Holocaust nor avoid it. In the contemporary world, the cultural obliteration they face has parallels: In Syria, for instance, less than a decade ago citizens could neither have anticipated nor avoided the brutal tactics their own government might deploy against them, or the extent to which the Islamic State group would attempt to destroy their cultural heritage. 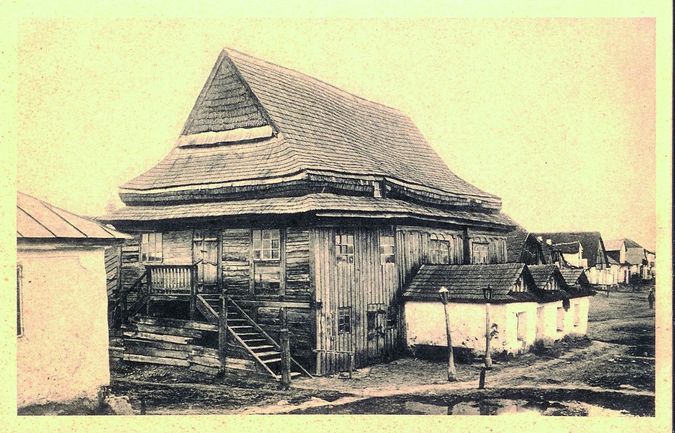 A wooden synagogue in Ukraine. Image by Museum at Eldridge Street

We are all subject to the forces of history. In our own lives, we rarely recognize it. That’s part of the lesson posed by artifacts like these postcards, cheerful representations of communities which were violently destroyed. Little about the world’s future movements is certain, and less is predestined: We must be grateful for our culture while we have it, and when it’s threatened, be prepared to fight.

Preparation, though, can do only so much.

“I look at all this stuff and think, ‘Oh, my God, how did that ever happen? It can’t ever happen again,’” curator Nancy Johnson said. “And then you think, ‘Well, maybe it could.’”