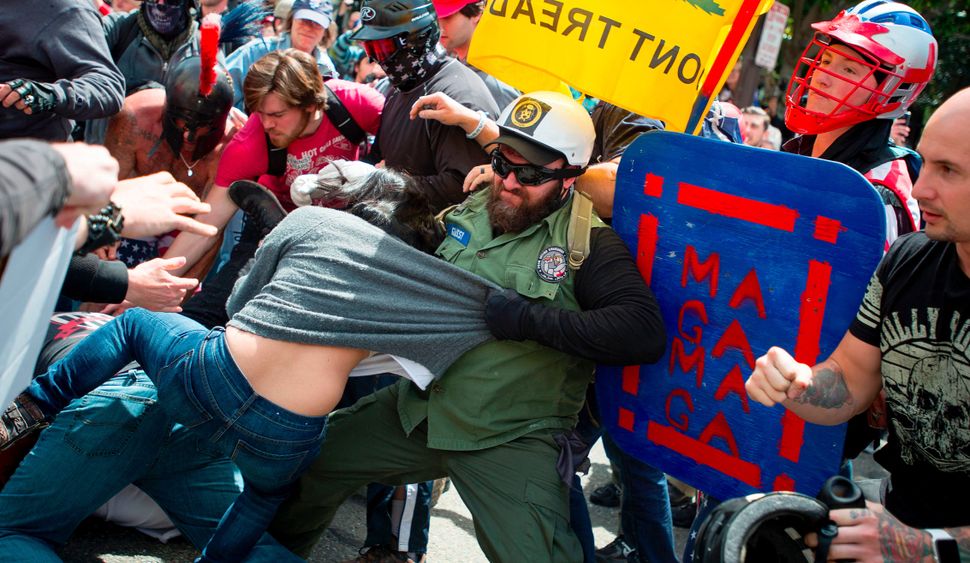 On April 15th, in Berkeley, we saw an increasingly familiar scene – violence at a political demonstration. At a “Patriots Day” rally, pro-Trump demonstrators, many of them self avowed fascists and Nazis, violently clashed with anti-fascist protestors (commonly referred to as “antifa”). Nazis were punched, Antifa members were punched, and less fringe commentators from each side condemned the violence – the only difference of opinion was who should be accorded the blame. It seems, based on the fact that “fringe” is by its very definition, on the outside, that mainstream punditry is the only voice in the room. And because the debate surrounding the morality, ethics and efficacy of Nazi punching has been largely vapid – the same platitudes again and again – I’ve compiled a short, but by no means exhaustive, reading list on the subject.

I suppose that, while this list is not meant to posit any answer to the problem of Nazi punching, it does require one implicit assumption – that fascists of all stripes are abhorrent. I do not include a piece from, say, Stormfront, because the idea that punching Nazis is unacceptable because Nazis are good, is itself, an unacceptable idea. Regardless of your position on the recent manifestation of political violence, the absolute immorality and unacceptability of Naziism and, more broadly, fascism, is not open for debate – history has closed that discussion.

Again, this list is not meant to be exhaustive. It is simply a limited overview of the debate of an interesting topic that’s seized the national discourse, a discourse that has increasingly become mired in the safety of cliche or incoherence. It is also, hopefully, a spur to further reading.

So without further ado – your short guide to nazi punching and the problems therein:

1) From Mother Jones to Middlebury: The Problem and Promise of Political Violence in Trump’s America – Emmett Rensin

Before delving into the questions of ethics, morality and efficacy, I think Emmett Rensin’s essay in Foreign Policy is an important starting point. Rather than tackling the question of should we or shouldn’t we, Rensin takes a phenomenological perspective and asks why this is happening in the first place. He writes, “If violence is an extraordinary recourse, then its use signifies extraordinary circumstances, affirming the abnormality and urgency of its conditions.”

Rensin is explicitly against political violence on moral grounds, but in his essay, the issue of morality is secondary – before we can even discuss it, we must understand the root causes of the violence. What’s more, we must understand what we mean by violence in the first place. The essay’s most important point, Rensin argues that we only see the recent spates of political violence as extraordinary because we have an incredibly narrow definition of what political violence actually is. Government sanctioned violence – militarized police forces, brutally sparse immigrant detention centers, the slave labor of prison – is violence all the same. This violence, he writes, “constitutes the vast majority of the world’s political violence and which is itself the very cause of grinding pressure in individual lives. Anarchists burn limos because limo owners burn the planet. The miners strike because the company robs and breaks them. The streets of Ferguson explode because the city of Ferguson loots and kills the streets.”

Punching Nazis, then, is best understood as a reaction to an intolerable and extraordinary set of circumstances, that were in part created by the constant grinding pressure of the ordinary undiscussed violence that permeates our world.

This article from the Nation is both an explainer and an endorsement of the Black Bloc, which, as author Natasha Lennard explains, “is not a group but an anarchist tactic — marching as a confrontational united force, uniformed in black and anonymized for security.” When we see photographs of black clad antifa demonstrators, it is this tactic that is being employed. The article endorses black bloc political violence, but its real importance is as a primer for understanding who is actually participating in some of the violence (it obviously comes from both the right and the left, contra to what many would have you believe. There is no need to explain that groups like Identity Evropa, the followers of Richard Spencer, or the general alt-right moron are, indeed, fascists and are, indeed, disgusting. They’re presence at violent rallies is unsurprising – their historic lineage lying with Naziism and the Ku Klux Klan).

3) The ‘punch a Nazi’ meme: what are the ethics of punching Nazis? – Tauriq Moosa

Here we enter into the moral debate. Tauriq Moosa seems to come down against political violence, but his discussion engages with traditional philosophical modes of thought and tries to seek a rational grounding. Moosa does not reach any novel conclusions, but his reasoning is far deeper than the usual unqualified hypocritical pacifism of most mainstream pundits. He writes, “When a rule is worth following, it becomes ‘good.’ This is why many agree ‘violence is bad’ is a moral rule: it can be applied universally. Where rule-based morality runs into problems is when two moral rules conflict. In this case, a rule we support is: ‘stopping Nazism is good.’ Another is: ‘violence is bad.’ This returns us to a dilemma instead of solving it. At the very least, we are able to clearly outline the issue.”

The article goes on to discuss the moral idea of consequentialism and the reality of the “white moderate” who readily condemns punching rioting (from either side) as unacceptable political violence, but is silent on more pervasive and structural issues. Even if you disagree with Moosa’s somewhat ambiguous conclusions, or even his premises, his mode of argumentation is instructive and can serve to elevate us above the usual platitudes.

In this article by Amy Ongiri, the issue of Nazi punching is considered from an aesthetic point of view. The video of America’s most famous Nazi Richard Spencer being punched became a widely disseminated meme, and so, in addition to being an act of political violence, it has also become a symbol. The article primarily discusses comic books, specifically Captain America, and the use of depicted political violence (again, the video of Spencer is both real and image) as a way in to the discussion at hand – if we are to talk honestly about punching Nazis, we must start from the premise that we greatly enjoy aesthetic objects that depict the violent repression of fascism (“Indiana Jones,” “Inglourious Basterds,” “Captain America,” etc…).

5) Philosopher Slavoj Žižek settles the “Is it OK to punch a Nazi?” question once and for all – Taylor Wafford

While this short interview with philosopher and full-time provocateur Slavoj Zizek mainly focuses on Trump, it does provide some interesting thoughts on violence. In the interview, Zizek distinguishes between active violence and passive violence. Active violence, that is, physical violence, undermines “a set of thick unwritten rules which makes our social life bearable.” We cannot tolerate it, he argues, because to admit it into the set of acceptable behaviors would be to destroy the rules that allow society to function – in other words, punching Nazis to save America is to throw out the (racist, anti-semitic, misogynistic, moronic) baby with the bath water. What Zizek terms “passive violence” is what we most commonly refer to as non-violent resistance. He writes, “Be brutal at a different level. When you encounter a guy like the one who was punched, act in such a way that even hitting him, even slapping him is too much of a recognition. You should treat him or her or whoever as a nonperson, literally.” On it’s face, it’s not a particularly novel idea, but when we consider the language, “a nonperson,” it becomes a bit more interesting. Passive violence, as it is traditionally understood, implicitly requires the recognition of the enemy – one must have a confrontation to occasion the non-violent resistance. But Zizek advocates stopping before the step of recognition, to deny the humanity of Spencer and his ilk by acting as if they do not exist. It’s a suggestion of dubious effect – even if we pretend there are no Nazis, they are still here – but one worth considering in light of the fact that Spencer was an anonymous fascist before he began receiving outsized media attention.

6) The Impossibility and Necessity of Being a Jew – Jean Amery

In this essay by Jean Amery, a half-Jewish author and Holocaust survivor, we consider Nazi punching not from a moral or political standpoint, but from a metaphysical one. It is not politics that are at stake, but dignity, being.

At the starting point, Amery writes “that anti-SemItism…according to Sartre, is not an opinion but the predisposition and readiness to commit the crime of genocide.” Viewed in this light, the ideology of the fascist “alt-right” is not simply another abhorrent political occurrence, but a lingering death sentence upon the Jews (and we might also add black people, gay people, Hispanic people…the list goes on). And how does one respond to a lingering death sentence? We turn to one of Amery’s stories of his time at Auschwitz:

“Before me I see the prisoner foreman Juszek, a Polish professional criminal of horrifying vigor. In Auschwitz he once hit me in the face because of a trifle; that is how he was used to dealing with all the Jews under his command. At this moment — I felt it with piercing clarity — it was up to me to go a step further in my prolonged appeals case against society. In open revolt I struck Juszek in the face in turn.”

“My body, when it tensed to strike,” Amery writes, “was physical and metaphysical dignity.” It was only in this act of physical violence against the very embodiment of indignity that Amery claimed himself to be a person. One cannot assert one’s personhood to a Nazi by “subjectively appealing to [one’s] abstract humanity” – humanity has a different, irreconcilable meaning to people like Spencer. To Nazis, Amery argues, humanity can only be asserted with the fist.

In order to focus the list, I pared it down to articles and essays that specifically address punching Nazis, but there are, of course, broader discussions to be had here on the nature of political violence. “Striking at the Heart of the State” and “Why Are They Laughing in Those Cages” by Umberto Eco, “The Rebel” by Albert Camus, are some personal favorites, but others will have both a broader and more comprehensive list, both on the specific topic of Nazi punching, and political violence in general, than I could provide. Think of this list as a primer, an appetizer – it’s a strange time, and, as always, there is plenty of reading to do.