Observing Yom HaShoah, And More To Read, Watch, And Do This Weekend 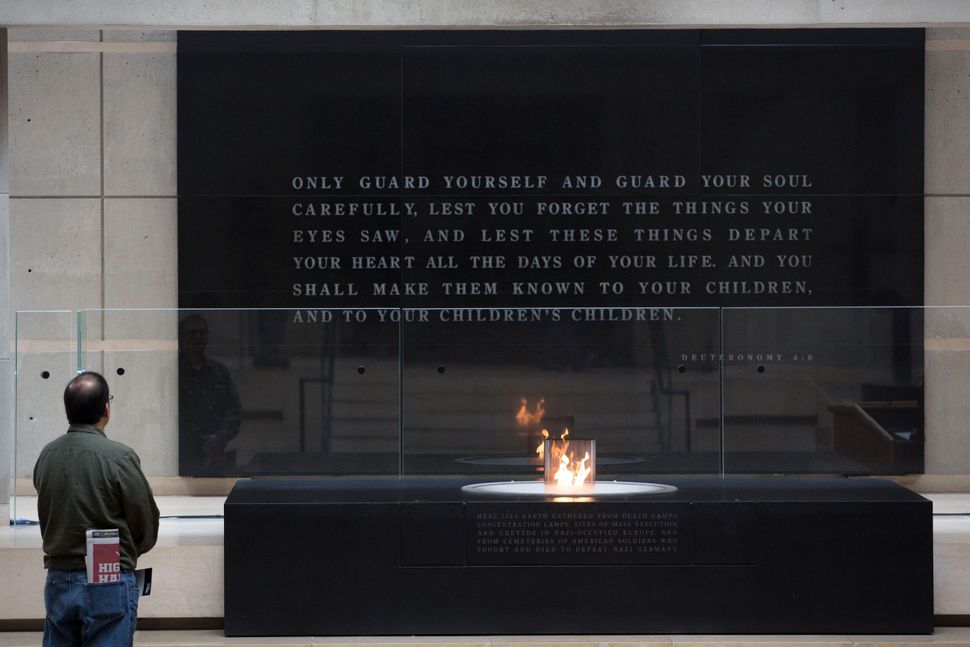 Yom HaShoah, or Israel’s Holocaust Remembrance Day, will be observed on Monday the 24. In the United States, many Jewish institutions are holding commemorative events on Sunday the 23.

In and around New York City, events include The Holocaust Memorial & Tolerance Center of Nassau County’s “Descent Into Darkness,” a conversation with two twins who survived the experiments of Dr. Joseph Mengele, the MOTÝL Chamber Ensemble’s performance of music written by Holocaust victims at Queensborough Community College, and the Museum of Jewish Heritage’s day-long observance, during which Holocaust survivors will tell their stories to Museum visitors.

For Yom HaShoah in Washington, D.C., attend the United States Holocaust Memorial Museum’s reading of the names of the Holocaust’s victims, which will take place everyday between Saturday the 22 and Wednesday the 26. Another option: Washington Hebrew Congregation’s all-day commemoration, featuring an art exhibit and conversations with Holocaust survivors.

In Chicago, attend one of two events at the Illinois Holocaust Museum and Education Center, and in Los Angeles, both the Los Angeles Museum of the Holocaust and the Museum of Tolerance and Simon Wiesenthal Center will host commemorations.

Three new nonfiction books stand out this week: Louise Glück’s “American Originality,” a series of essays on contemporary poetry, The Washington Post’s Amy Goldstein’s “Janesville,” an deeply-reported look at a Michigan town sent into upheaval by the closure of a General Motors plant, and Annabelle Gurwitch’s comic, autobiographical “Wherever You Go: Stories About My Family You Might Relate To.” In longform, read Ijeoma Oluo’s recounting of her interview with Rachel Dolezal in The Stranger, then the Forward’s Phoebe Maltz Bovy’s analysis of the piece.

If you’re in a documentary mood, find a screening of “Citizen Jane: Battle for the City,” which revisits activist Jane Jacobs’s legendary battle with city planner Robert Moses over future of lower Manhattan. And take in HBO’s film adaptation of “The Immortal Life of Henrietta Lacks,” adapted from the book by Rebecca Skloot, which airs Sunday; advance review have lauded the performance of Oprah Winfrey, who stars alongside Rose Byrne.

In New York, spend your Sunday night at the 92nd Street Y, where Jeff Greenfield will speak with The New York Times’s Maggie Haberman and Alexander Burns as part of his ongoing interview series “In the News.” Saturday and Sunday In Washington, D.C. the National Philharmonic featuring cellist Zuill Bailey will perform Max Bruch’s “Kol Nidrei,” Ernest Bloch’s “Schelomo,” and Modest Mussorgsky and Maurice Ravel’s “Pictures at an Exhibition” at the Strathmore.

In Chicago, see the Salaam Shalom Music Project perform an interfaith concert at Evanston’s SPACE, or the Northshore Concert Band’s Yom HaShoah commemorative concert at the Pick-Staiger Concert Hall. Both performances are on Sunday afternoon. And in Los Angeles, take your gleeful pick of the many events associated with the Los Angeles Times Festival of Books, which will feature authors like Cory Doctorow, Masha Gessen, and constitutional scholar Erwin Chemerinsky.

Observing Yom HaShoah, And More To Read, Watch, And Do This Weekend