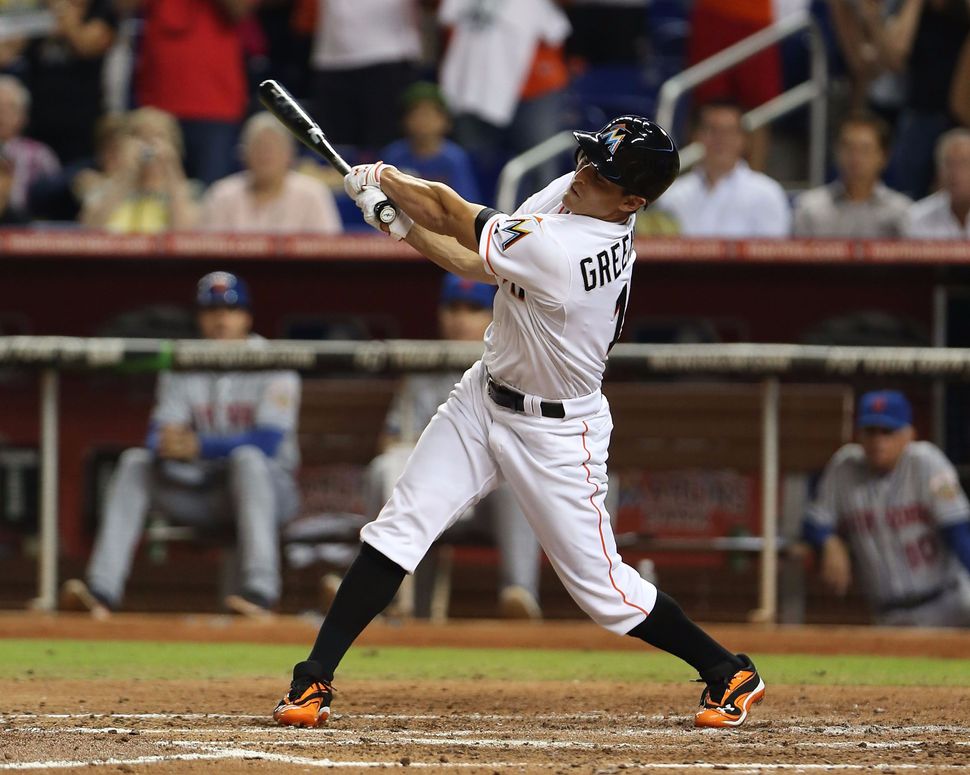 Adam Greenberg always viewed being Jewish as a central part of his story. He had even more reason to emphasize that point during a recent appearance at a Jewish United Fund event in suburban Chicago.

Addressing a group of parents with their school-age children, Greenberg told them, “You know when people say life throws you a curveball? Well, life threw me a fastball to the head.”

Greenberg, for what now is well over a million times, then details how he was the victim of perhaps the cruelest tale in baseball history. After working his way up the Cubs farm system, he received the call to the big leagues in June, 2005. Full of anticipation of a long career, Greenberg stepped to the plate in a game against Florida.

It basically lasted only one pitch.

Greenberg didn’t have a chance, as pitcher Valerio de los Santos nailed him in the head with a fastball. Stunned and dazed, he was left him a concussion and vertigo symptoms that took more than two years to clear up. Then a string of other ailments thwarted any comeback bids.

A campaign to give Greenberg an official Major League at bat led to the Marlins using him in the 2012 season finale. With much fanfare and emotion, Greenberg faced knuckleballer R.A. Dickey, that year’s National League Cy Young award winner.

The parallels to his Jewish heritage are clear, he says to his audience on this day.

“What is inherent to all of us as Jews?” Greenberg said. “We have it inherently in us to overcome obstacles and persevere. Jews have gone through so much at every stage of history, and they have been able to overcome.

“I look at my story. You look at what I’ve been through. And I am proud to say I have been able to overcome.”

Greenberg took the Jewish connection even further. He noted his Jewish name was a reason why Jewish doctors sought him out to offer treatment. “You felt that sense of a Jewish community,” he said.

Indeed, Greenberg feels so strongly about the lessons he has learned, he wants to share them in a new book, “Get Up: The Art of Perseverance.” Greenberg talks about the book, his baseball career, his strong reaction to the Cubs winning the World Series and more in a special Q/A.

Why did you decide to write the book?

After I appeared on The Today Show in 2012 (to discuss his game with the Marlins), people were stopping me in the street, telling me how good my story made them feel. It made realize how this whole experience was bigger than me. People saw this as perseverance and anything being possible. Ultimately, it sparked me to want to do a book. It is about understanding that with any goal you seek, there always will be obstacles in your way. If my story mirrors someone else’s personal story, whether it is injury, illness or financial stress, you have two options: you can lie there and feel sorry for yourself. Or you can ‘Get up.’ I got up. It is about the art of perseverance.

How do you view your story?

It’s interesting. At this point, it almost has become a story I tell in third person. I have told the story so many times, it’s almost as if I am talking about someone else. The only time it really hits me is when I allow myself to go there.

About a month after the Cubs won the World Series, somebody sent me something. So I pulled up some old YouTube videos about me. I just broke down. I really got into the moment of what actually happened to me. For a split second, it was, ‘Oh my God, I was really there. I really got to the big leagues.’ Maybe it was because the Cubs just won the World Series and everything was so fresh, but it all hit me. It’s a form of healing, I suppose.

How did you feel about the Cubs winning the World Series?

It was bittersweet to be honest with you. I was beyond ecstatic for the fans, players and the organization. They deserved it. But on the personal side, I wanted to be part of that. When I got called up by the Cubs, I wanted to help them win the World Series. I did not get that chance.

Does that pitch define you? The first line in your Wikipedia page says you “are best known for being hit in the head in his major league debut on the first pitch of his first plate appearance.”

I don’t want to be known as the guy who go hit in the head. But I know it’s always going to be a part of who I am. However, if my story can turn into something that helps other people, then I am fine with it.If I played in 10-15 years In the big leagues, would my impact be the same? When I tell my story, I don’t regret anything that happened to me. I wouldn’t be where I am today.

In 2011, you got a chance to face de los Santos while playing for Bridgeport, an independent minor league team. You got a single off of him. What was that like for you?

I knew I was going to face him. I prepared for it like it was a big-league game with 35,000 people in the stands. When I got that hit off of him, I thought, “What would have happened if I got a hit off of him in 2005, stole second, scored and then I get 10 years in the big leagues?” It’s more fun talking like that, but it didn’t work out that way.

Indeed, it is important to note that your career did not end in 2005. In fact, you returned to action in the minors a few weeks after getting hit in the head.

I had overcome so much to get to the big leagues. I’m 5-8 and I’m Jewish. You don’t see that combination much in baseball. I felt the faster I got out there, the less likely they would bring in someone to replace me. I didn’t have the luxury of going, ‘I’ll be back when I’m ready.’ For two years I had a hard time focusing. I had an ophthalmologist give me a visual test. He said, ‘.209 is a helluva average for someone who can’t see.’

When things cleared up, you had some success in the minor leagues. But again, every time you got going, you battled injuries.

One year, I was playing well and snapped my rotator cuff. I played through it for 4 ½ months. It was hard for me to stay in one piece. It wasn’t for a lack of taking care of myself.

The comparisons between you and fellow Jewish Major Leaguer Sam Fuld are obvious. He has eight years in the big leagues. Do you ever look at him and think about what might have been?

I love Sam. We played together. You’re right, we’re both similar. We’re both small, we’re both Jewish, and we both hit left-handed and play the outfield. You could put a jersey on me and say I could do everything he’s done if I had not gone through what happened to me. But those weren’t the cards that were dealt to me.

How did you view your one-game return to the Marlins in 2012?

It was magical. I don’t want to say it was closure. I viewed it as another opportunity to get out there. I wasn’t owed it. Nobody needed to do it for me. I was grateful that they recognized that I made it to the big leagues before, and I had earned that opportunity to be back out there.

However, in the bad timing department, you had to face Dickey, a knuckleballer enjoying a Cy Young year. It is hard to imagine a tougher pitcher to face in that situation.

Right. That was the icing on the cake. Dickey did exactly what he was supposed to do. Once he got to 0-2, he could have thrown something to the moon, and I would have swung. I wasn’t going to take a called third strike. The most important thing is how great my teammates treated me. They all appreciated what I was trying to do. That is something I will cherish forever.

For someone who was essentially deprived of a big league career, how do you sound so positive when you talk about it?

It’s not about accomplishing your goal. It’s about what you do to accomplish your goal. I worked hard to get there. People say, ‘I’m so sorry you got hit in the head.’ I always say, ‘Yes, but I made it to the big leagues.’

The original version of this story appeared on JewishBaseballMuseum.com