How Did John Steinbeck And An Obama Staffer Get The Bible So Wrong? 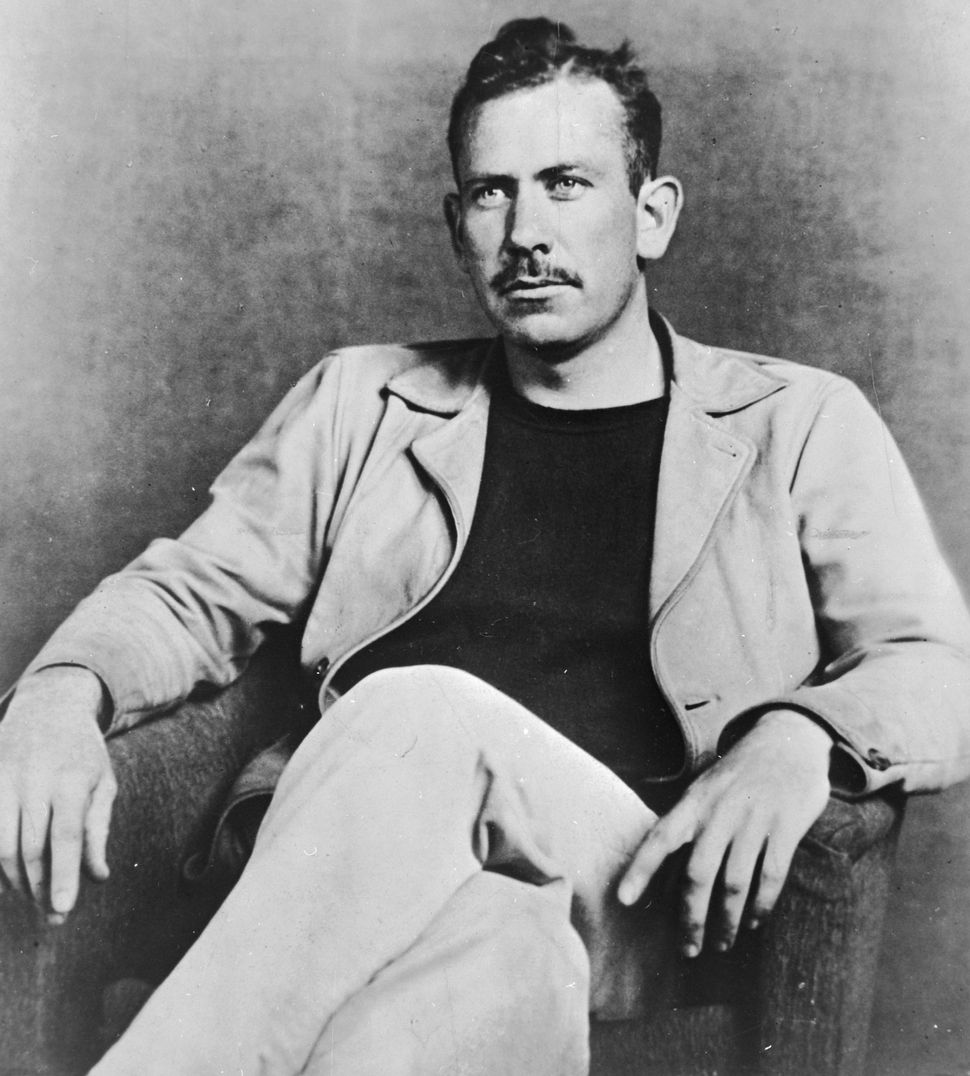 Working for Barack Obama can be a career maker, but Hebrew readers have been puzzled by the explanation for the path that one former staffer took. The Chicago Sun-Times reports that Michael Slaby, whom the newspaper described as “among the key tech gurus for Barack Obama’s two presidential campaigns,” has founded a startup called Timshel that helps not-for-profits and activist groups use digital tools to increase their analytic capabilities.

Sounds good. But where, exactly, does the name Timshel come from?

“It’s a reference to [Steinbeck’s] ‘East of Eden’ — the Hebrew word for “Thou mayest” from the Bible [in the story of Cain and Abel, when God tells Cain he has the freedom to choose to overcome sin],” Slaby told The Sun-Times. “Our goodness is being determined by the choices we make.” Wait, said early morning readers sipping coffee all over Chicago. Coffee spluttered on tables.

Here is a news flash from the distant land of real news: There is no Hebrew word “timshel.” There is, however, a Hebrew word timshol, meaning “you will rule.”

The only place timshel as a Hebrew word appears is, well, in “East of Eden.” That hasn’t stopped it from being a hot topic online: Quora users have been passionately discussing timshel and the last pages of “East of Eden” for a while now, as have a host of bloggers, none of whom seems to have any idea of how Hebrew works. “Timshel” has also been the title of an episode of the television series “Hell On Wheels,” and Oprah’s Book Club has referenced it,

All this timshel mania is inspired by a passage from “East of Eden” in which the character Lee, a cook and housekeeper in the novel, is bringing up the story of Cain and Abel again — and its biblical translations. The story of the two iconic biblical brothers is threaded throughout the novel, which itself parallels the tale of two brothers to explore the ancient theme of good versus evil.

Here is the passage that made timshel famous:

Lee’s hand shook as he filled the delicate cups. He drank his down in one gulp. “Don’t you see?” he cried. “The American Standard translation orders men to triumph over sin, and you can call sin ignorance. The King James translation makes a promise in ‘Thou shalt,’ meaning that men will surely triumph over sin. But it’s the Hebrew word, the word timshel —‘Thou mayest’ — that gives a choice. It might be the most important word in the world. That says the way is open. That throws it right back on a man. For if ‘Thou mayest’ — it is also true that ‘Thou mayest not.’ Don’t you see?”

What probably happened here is that Steinbeck read the Hebrew word timshol, or “will rule,” which appears in Genesis 4:7, as “timshel,” and then kept the “will” or “thou mayest” and lost the rest.

In Hebrew, this part of Genesis is complex, and infamously difficult, depicting Cain’s distress when he realizes his offering isn’t impressing God. The 1985 Jewish Publication Society translates the passage like this, with, yes, these exact line breaks:

6-And the Lord said to Cain,
Why are you distressed,
And why is your face fallen?
7-Surely, if you do right,
There is uplift.
But if you do not do right
Sin couches at the door;
Its urge is toward you,
Yet you can be its master.

But that’s not the only version. The last few words of the verse have been translated in many ways over the centuries. The 1917 JPS translation for verse 7 includes the word “mayest” that Steinbeck featured on the last page of “East of Eden”:

“If thou doest well, shall it not be lifted up? And if thou doest not well, sin coucheth at the door; and unto thee is its desire, but thou mayest rule over it.”

It’s hard to resist breaking it down, because what’s happening with Steinbeck fans and “thou mayest” is a case of multiple errors. It’s not just that “timshel” doesn’t exist in Hebrew and timshol does, and that no one bothered to fact-check; it’s something deeper: the classic error of reading only part of the story, or in this case, part of the phrase.

It also reveals an ignorance of the basic fact that Hebrew is more concise than English.

In translation, it’s totally normal for one Hebrew word to become three in English. A famous example is the start of Genesis. The word bereishit, the first word in the Bible and the title of the volume Genesis, is usually translated as “in the beginning.”

Unfortunately, Steinbeck’s misreading of a concise and ancient Hebrew word continues to influence American culture. Oprah’s Book Club and the “Hell On Wheels” television series referenced timshel as “thou shalt,” reading Steinbeck’s multilayered mistake as something profound. Timshel even has its own website, timshel.org, which features the text of the ending of “East of Eden.”

And now, Steinbeck’s old flub, revived and glammed up with a connection to Obama, may lead to more news coverage that encourages misunderstanding of the Bible, and cements the centuries-old comfort with ignoring how Hebrew works.

So why should we care?

After all, thousands of copies of “East of Eden” are in print. And if it’s good enough for Oprah’s Book Club and for AMC Networks, not to mention a former Obama staffer, maybe it should be good enough for us.

To paraphrase Oprah Winfrey, there is one thing I know for sure.

It comes down to caring about language, and insisting that words have meaning, which is, frankly, a hot contemporary topic that is not just political but also moral.

Language is what powers thought and what creates culture — so at its root, the widespread comfort with using timshel incorrectly reflects a comfort with discarding Judaism, and Jewish text, no matter how ancient.

And it’s that very comfort that should make us uncomfortable.

Aviya Kushner is the Forward’s language columnist and the author of “The Grammar of God” (Spiegel & Grau, 2105). Follow her on Twitter, @AviyaKushner.

How Did John Steinbeck And An Obama Staffer Get The Bible So Wrong?