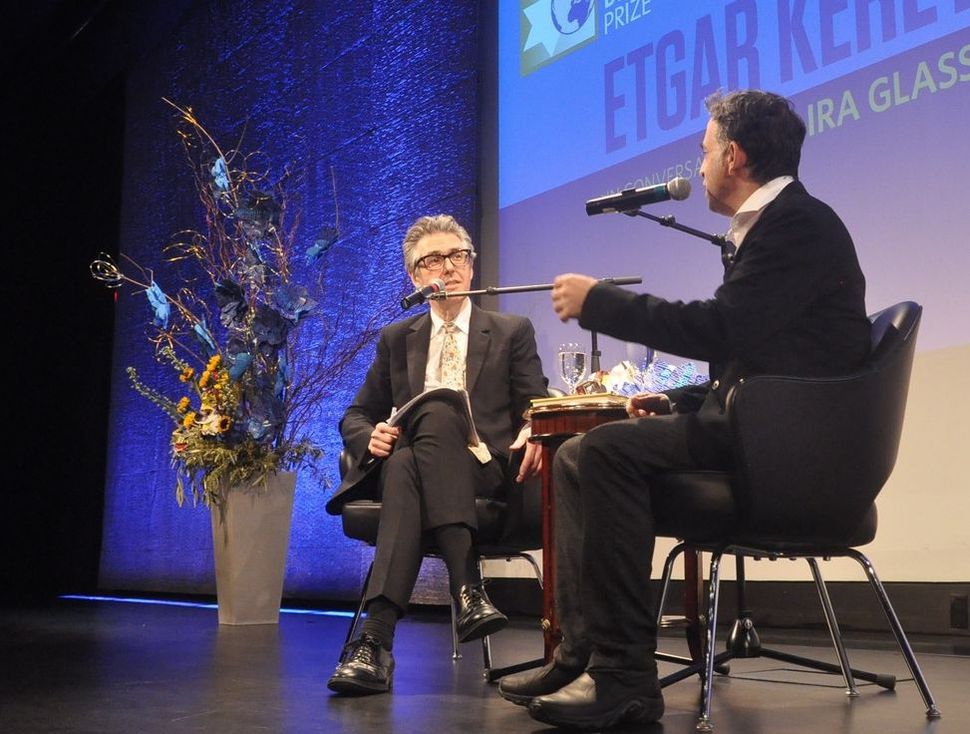 Everything was wrong. And then everything was right again at the presentation of the Charles Bronfman Prize to Etgar Keret on May 11.

As Ira Glass pointed out, with all the testimonies it felt like a Memorial Service. Except that the dead guy was alive and on stage. (Seeing Ira Glass in the same room as his radio voice was also its own form of cognitive dissonance.)

A famous Palestinian writer gave a talk about Jewish values, the similarities of having a refugee parents (comparing the Holocaust and the Nakba) and how an Israeli had touted the benefits of deodorant.

A Supreme Justice of Canada — Canada! — welcomed people to the New York Historical Society. And those people included, among others, 9 previous winners of the prize, Peter Salovey, president of Yale and David Broza — international musical superstar.

A writer of flippant short stories was receiving a prize that had previously gone to people who had saved refugees, cured cancer and transformed public education.

What was going on?

But then Justice Rosalie Abella’s exposition (a speech that would have been the keynote of any other gathering), Sayeed Kashua’s introduction and Glass’s questions were done and Keret started talking. His adopted manner of semi-shlemiel and chosen fictional style of short snapshots of a reality that twists at human tangents make it seem like he’s a slight, comic talent.

But, when push came to shove around the Gaza conflict, this comic short story writer wrote OpEd pieces to stand up for what he believes in — tolerance, compassion and the importance of living with others. Technically, Keret explained, fiction writing feels like floating in the air, “defying gravity” while writing fact feels like a chore, reducing complicated and nuanced situations to a single, simple point of view.

Glass acknowledged that he had begun his own journalistic career hoping to tell the truth and change people’s minds. But he pointed out that the truth changes no one’s mind and that he had to “make stories” using the tricks of fiction that “just happen to be true” to convince people. And this is where Keret scores, because few writers employ the strategies of fiction to the effect that he does.

Keret said that his fiction is aimed at the “weakest muscle in human body, the muscle of empathy.” For Todd, the friend who asked Keret to write a story to make women sleep with him, he wrote a piece that showed Todd was “not an asshole” — the rest was up to Todd. No one wants to think about anyone else, that’s why the empathy muscle must be trained with fiction. To know why an American tourist girl might want to sleep with you — you Todd! — you need to know who she is, how she feels, what she thinks.

Keret is famous for his twists and turns, but those turns are not always flippant, even when they seem slight. You see how it feels to be someone else. He told the story of going out to a fancy Italian restaurant stoned. Unable to see the menu but very much desiring to eat, Keret asked the stone-faced waiter if it would be possible to have Mac and cheese. The first two times he was rebuffed in no uncertain terms. Success finally happened when he asked “Have you ever been in the position to make a person really happy, only to deny them on a technicality?” Telling the story in a way that the listener had agency, he let the waiter write himself into the good guy.

And that’s what he has done with his own persona, with his books and with his opinion writing about the Middle East conflict, especially about Gaza. With sly stealth and with spectacular misdirection, Keret has made us re envisage the possibilities of the world around us. And he’s backed it up by going to the funerals of Palestinians, of standing up with his friend Kashua, of grinding out with no joy the writing he feels is necessary.

At the presentation people, including Keret alluded to him being a diaspora writer, rather than an Israeli writer. It’s a distinction with which I don’t fully agree and, even if I did, I don’t think it’s an accurate portrayal of Keret. But what is true of him is that by playing a particular form of storytelling shlemiel in control of bizarre worlds just a wrong turn away from our own he is able to convince people of the truth of others’ humanity. And for that alone — even without the dangerous integrity of his Gaza pleas — he deserved to win the Charles Bronfman Prize 2017.