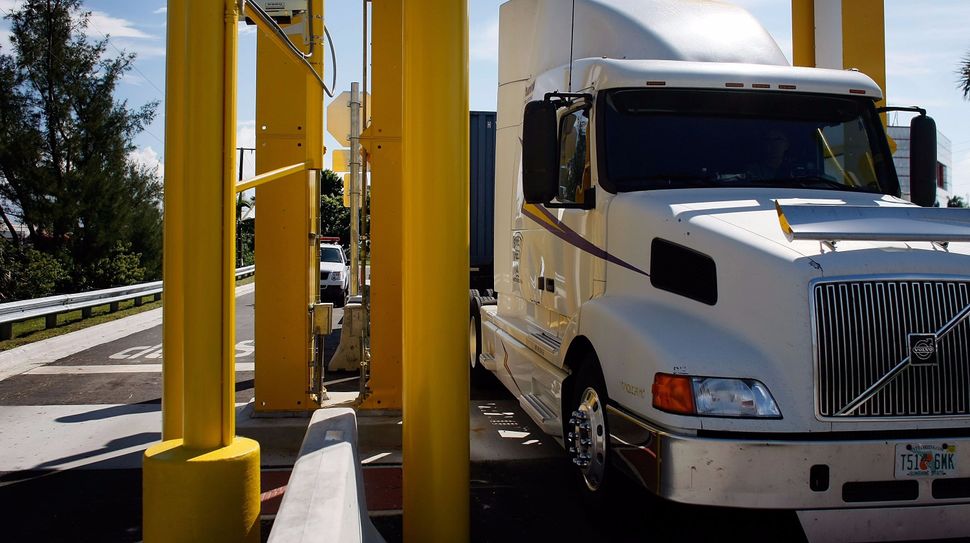 When I was growing up in Colorado, my father and I would regularly drive by a truck stop slightly north of Denver called Deno’s 6 & 85. We always talked about stopping in, although we never did. With 70s-era bright neon signs advertising steak and cocktails, the roadside restaurant seemed like a home for frank, burly folks who had a soft spot for tacky grandeur.

What made Deno’s so alluring? Bizarrely, the answer is — kind of — the Yom Kippur War.

IN a May 12 episode of WBEZ Chicago’s podcast “Sound Opinions,” producer Evan Chung told the story of how that 1973 conflict between Israel and a group of Arab countries led truckers in the United States to unite, rebel, and in the process, accidentally craft an image of themselves as romanticized outlaws. Oh, and in the process, it also led an advertising jingle to become a #1 hit song.

How does all this connect? As Chung explained, during the Yom Kippur War, the United States supported Israel militarily. In response, the Arab coalition significantly reduced their oil exports.

“The oil embargo made gas supplies in the U.S. go way down, and gas prices go way up, almost doubling,” Chung said. “Drivers would wait in four or five hour lines just to get a few gallons, often running out of gas while in the line. And a lot of Americans saw this as evidence that the country was coming undone.”

Why? Chung’s guest on the show, Princeton research scholar Meg Jacobs, explained that in the 70s American cars were “the biggest and least fuel-efficient” that they’d ever been, “because there’s a sense that we don’t have to worry about gas.” In that context, the oil crisis became “a fundamental shock to our self-perception.”

In response to the crisis, Chung said, President Nixon “signed a law that lowered the speed limit on all national highways to 55 miles per hour.” While that was an annoyance for the average civilian driver, for truck drivers — especially those working outside the truckers’ union — it was a disaster.

“They had to pay more for the diesel when they fueled up, there was less of it available, and they now had to abide by the 55 mile per hour speed limit,” Jacobs said. “This pushed them really over the edge.”

Using citizens band radios, known as C.B. radios, which function a bit like walkie-talkies, the truckers helped one another avoid speed traps. More dramatically, they took to forming convoys — in Chung’s words, “tightly-packed blocks of trucks” — that let them drive at whatever speed they wished, leaving police little opportunity to enforce the speed limit.

And then they rebelled.

“An impromptu trucker uprising began on December 4, 1973, when a fed-up truck driver parked his rig in protest in the middle of the interstate in Pennsylvania,” Chung said. “Word of his rebellion spread to other truckers across the country via the CB channels, and before long, you had a nationwide convoy of parked trucks.”

It was the first in a series of trucker uprisings, which at their most extreme, involved striking truckers violently preventing non-striking truck drivers from completing their jobs. Among the tactics used? Snipers lining the road — yes, really — nails on the asphalt, and once, fatally, a brick dropped through a windshield.

The rest of the country, according to Chung and Jacobs, was anything but appalled.

“The public viewed truckers as romantic modern cowboy figures, bravely standing up for their own rights,” Chung said.

That image was engrossing enough that a song about the truckers’s rebellion rose to the top of the charts in 1976.

That song was “Convoy,” by C.W. McCall. Writing about it for Rolling Stone’s 100 Greatest Country Songs of All Time, a list on which “Convoy” comes in 98th, Jonathan Bernstein described it as an “ode to C.B. radio,” and noted it “sold two million copies, started a C.B. radio fad and even spawned a successful action movie of the same name.” (Chung, on “Sound Opinions,” called it “a song about truckers banding together to stick it to the man.”)

It was an ascent that the two men who created the fictional C.W. McCall couldn’t easily have predicted. McCall debuted in advertisements for Old Home Bread for the Metz Baking Company, singing songs written by lyricist Bill Fries and musician Chip Davis. The McCall advertisements became so popular that Friese and Davis gained a series of recording contracts for McCall. And those contracts were lucrative enough to help Davis launch the now-omnipresent music machine Mannheim Steamroller, which takes self-proclaimed pleasure in being “largely credited with establishing the genre of New Age music.”

So, yeah, the Yom Kippur War is responsible for that, too. As for me, next time I’m in Denver maybe I’ll finally pull into Deno’s to raise one of those brightly-advertised cocktails to McCall.