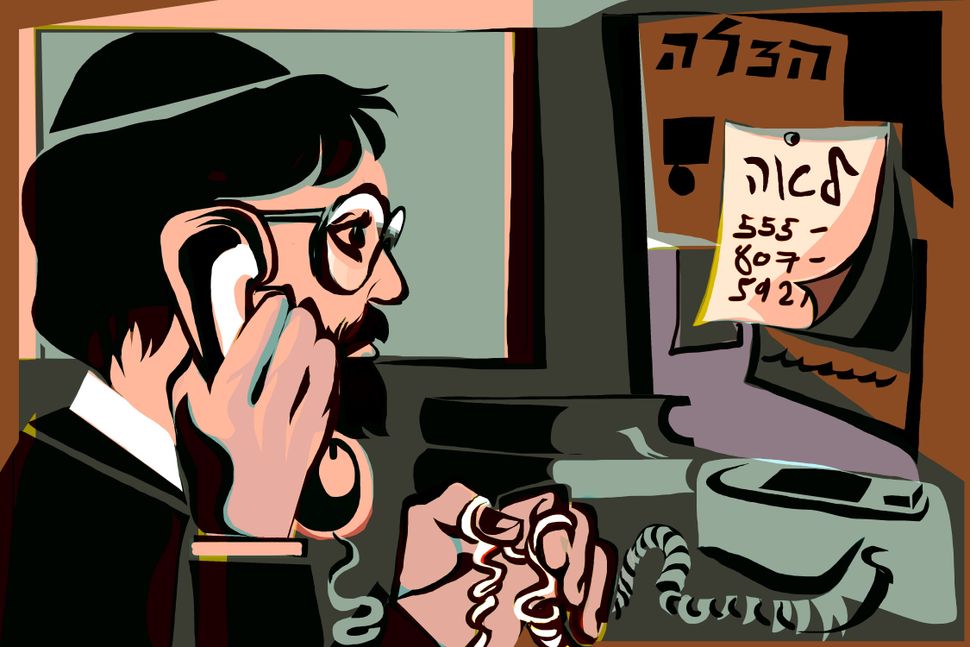 Yankel walked up the stairs in the dormitory, to light the Chanukah menorah. He lit a match but it blew out. He lit another one. Outside, a mix of rain and snow was falling. Inside, the ancient cast-iron radiator hissed. Chanukah was late this year – the end of December – and the forced mirth of the holiday, inseparable in his mind from the unremitting din and lights of the Gentile holiday, made him feel even sadder and darker than he might, as if the whole oppressive season were imposed on him.

He could still remember the day that he set foot in the Yeshiva fifteen years ago. Fifteen years! The loneliness! It didn’t help that his friends were all married with one or two children, while he, Yankel, spent his days in the Yeshiva, surrounded by an ever-younger crop of young men in their late teens and early twenties studying the Talmud. While twenty-eight might sound youthful in some circles, in the Yeshiva it practically qualified him for social security payments and a pension. But even more than that, with his suit and tie and hat-with-no-pinches, he hearkened back to an earlier time. His eyeglasses were circa 1970 and he trudged around in rubber-soled shoes with the bulbous cap toes.

Just then he heard someone call out his name from down the hall. “Yankel, there’s a phone for you.” At first he thought it was his father, but he realized that his father had gone to Israel and it was unlikely that he would be calling at this hour, unless…

It was Miriam the shadchan’te, the matchmaker. He recognized her soft, authoritative voice immediately. Although he had been out with many young women, many of them arranged by this fine matchmaker, everything always came to naught. He knew he had to marry, but it was like looking at the vast ocean from the shore, waiting for a ship that he couldn’t be sure even existed.

“Yankel, I have someone for you. She’s a good person and you’ll like her.”

Good. It wasn’t “good” Yankel wanted, but something different, infinitely more complicated and much darker than “good,” though he could barely admit this to himself.

“She’s a girl from a God-fearing household. They aren’t distinguished, at least not in the classic sense, but they’re very good people – very fine, baalebatish, the better folk.” The shadchan’te dove into their family history: “The father is Hungarian, a survivor, maybe from Transylvania or Rumania. He makes or sells caps. He has a store in Williamsburg, but he lives in Flatbush. She’s twenty-three, very smart – book smart. I think you’ll like the way she looks, too. Can I give you her number?”

“Sure,” Yankel answered, though his answer was an automatic one – an answer from a man who had no choice and no answers. “Hold on.” He let the pay phone receiver hang while he got a pen and a piece of paper. “What’s her number?”

As he dialed the number the next evening, Yankel had the sense that the numbers were random, as though the phone were a slot machine. Life is a lottery, Yankel told himself. One has to continue to play (even if he had never been and never would be “lucky.”) This was the way he rallied himself on such occasions.

“Hello. This is Yankel Rosenberg calling to speak to Leah.”

“Hah – llo,“ an accented female voice answered. “I will get her.”

Yankel stared at the telephone numbers written on the wall on top of other notices – a flyer for Hatzoloh, the Jewish ambulance service, and signs warning of the spiritual dangers of studying secular subjects and going to university. This time it was Touro College the flyer was rallying against. The year was 1985 and the zealots of Brooklyn were in full swing, ready to denounce the slightest adjustment to modernity, urging everyone to march back into the 12th century. Even within the austere, rigorously-Orthodox confines of the Yeshiva, everyone knew these zealots to be kooks.

Such was Yankel’s reverie the first time he heard Leah’s voice which was just the right amount of high and girlish – an attractive voice. But Yankel, after many years of dating, had trained himself not to pay attention to voices. A man must not marry a woman until he sees her, the sages in the Talmud said, even if both sides agreed to it — as sometimes happened in ancient times. Even 2000 years ago, the sages insisted one must lay eyes on the woman at least once before he marries her. It wasn’t a business deal. Seeing was the point. From seeing comes affection, love.

And Yankel couldn’t have agreed with the Talmudic rabbis more because what little Yankel allowed himself to see never quite agreed with him. It’s not that he was what some would call picky as though he were holding out for a “looker.” On the contrary. To hear him say it, all he wanted, no— needed (for once!) — was to look into a girl’s face and not have it cause him conflict, upset. But what to do? He had to get married. Bachelorhood was no option for a Jewish man, certainly not for a rabbi. And he was twenty-eight!

A man who lives without a wife lives without joy, without blessing and without goodness. This is what the Talmud said. Alas, he felt he just couldn’t. Of the dozens of women that he had met, he couldn’t think of one with whom he felt at ease. He would try to explain it to himself: I look at her; I get queasy. Then, naturally, I have to look away. Then I try again. I look once more. No respite. His rabbis had urged him to talk about his problem with a psychologist, but Yankel refused to accept that there might be something wrong. A man has to like the woman’s appearance, he told himself. This isn’t pathology. Still, given his age and lack of success, every so often he thought perhaps there was something wrong with him. In any case, it was all a painful mystery to him that engulfed his heart in a chronic sickness.

But there was a silver lining. The shadchan’te, Miriam, who was the wife of an older colleague, did actually seem to like him. It surprised him that he felt at ease in her presence when he met her the first time and then when they spoke on the phone. In fact, she never seemed to tire of setting him up. She had introduced to him no fewer than twelve girls at last count. Problem was that the girls she set him up with, even those who did like him, reported back in pained tones. “I sense there’s something just a little wrong, a little off about him.” One perceptive woman told Miriam, “He sees, but he doesn’t look, and when he looks he doesn’t see. It’s strange. It’s like he can’t do both at the same time.”

Truth is, she was right. He had long ago made up not to “look” when he was on a date. Because when he did look, whatever he did see, beauty, ugly or anything in between, might render him on extreme occasions, mute and even terrified. It was easier not to look. Such was his torment. Where other matchmakers might have criticized him for this, or at least tried to instruct him, there wasn’t even a hiccup of disapproval or judgment from Miriam the shadchante, and for this alone he was indebted to her.

“Not the one,” he might report back to her after a date.

“Did you look at her, Yankel?” Miriam might ask him. “She was a beauty.”

“I looked plenty – with one eye, but not with two. With one eye I saw enough to know that she wasn’t the one.”

“Not the one,” the shadchante would echo. “No worries,” she said. “When it’s the right one, we’ll both know.” That was that, until at some point, not too long, there would be another suggestion, another young woman who might be for him. Yankel was at a loss to explain the shadchan’te’s goodness. She must be the patron saint of lost causes to be busy with me, he mused, but everyone knew that she was the most ge’shikte, most able of all the amateur matchmakers in Brooklyn.