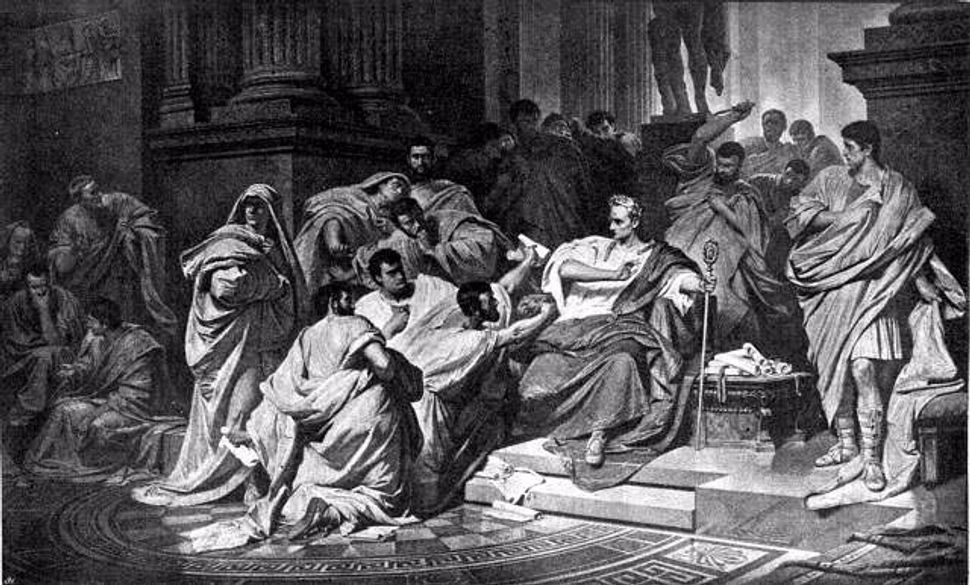 There is a point that must be made: Corporations are not your friends.

I am writing here in reference to the current Shakespeare in the Park production of “Julius Caesar” in which the titular character is portrayed by an actor who dresses and acts conspicuously like Donald Trump. I haven’t seen the play, so I can’t and don’t care to comment on the production itself –- rather let’s discuss the controversy surrounding the performance (such is the cannibalistic nature of the internet content machine –- event, outrage, outrage at outrage, and so on…).

Some background: Shakespeare in the Park recently produced a staging of Shakespeare’s (who else?) “Julius Caesar” –- one of the playwright’s historical tragedies. You all know the story. Caesar declares himself ruler of Rome, brings a renewed vigor and sense of justice (of a sort) to the Republic (no longer a republic at all), and is subsequently murdered by a group of conspirators including his best friend Brutus (“Ides of March…” “Et tu…”) –- this is the first three acts. The last two acts depict the fallout from the assassination. After a rousing speech by Marc Antony in defense of the fallen Caesar, the conspirators are driven from Rome. A battle ensues between the army of Brutus and his co-conspirators and the army of Antony and Octavius. Antony and Octavius win the day; the conspirators commit suicide, of course. The play ends with another speech by Antony, this time defending the fallen Brutus, stating that though he murdered Caesar, his motivations (but not his actions), that is, the preservation of the Roman Republic, were noble.

As Rebecca Mead at the New Yorker points out, “Shakespeare’s play does not celebrate the manner of Caesar’s death but rather warns against it.” Also: “It hardly bears pointing out that art is not life, and that to give “Julius Caesar” a contemporary resonance does not amount to an endorsement of the assassination it depicts.” Of course, the obviousness of these observations has not prevented outlets like Breitbart, Fox News and the Daily Caller from decrying the play as an assault on the President (which, of course, it is, but as satire, as theater, not as physical threat –- it is mind boggling that this bears repeating). The Daily Caller excoriation is particularly funny and ironic given that they published a remarkably stupid article (just dripping with authority-fetishism) back in 2016 titled “Donald Trump Is America’s Julius Caesar” (is this a threat? Treason? Hannity, where are you on this?).

But the value of autonomous art or the latent conservatism of the concept of “good taste” as it pertains to the art world is not our subject here (it is worth noting however that in 2012, the Acting Company produced a version of “Julius Caesar” in New York at the Baruch Performing Arts Center in which Caesar was portrayed by an Obama stand in –- which is also a completely acceptable, indeed, welcome rendition. Art should challenge power). Following the controversy of the current Public Theater production, Delta Airlines and Bank of America, two corporate sponsors for Shakespeare in the Park, pulled their funding (Delta pulled their funding for the theater group, Bank of America only pulled their funding from this specific play).

“No matter what your political stance may be, the graphic staging of ‘Julius Caesar’ at this summer’s Free Shakespeare in the Park does not reflect Delta Air Lines’ values. Their artistic and creative direction crossed the line on the standards of good taste. We have notified them of our decision to end our sponsorship as the official airline of the Public Theater effective immediately.”

While Bank of America issued a more succinct, but functionally identical rendition:

“The Public Theater chose to present Julius Caesar in such a way that was intended to provoke and offend. Had this intention been made known to us, we would have decided not to sponsor it.”

Those upset by the decision however, seem to be missing something essential –- branded corporations are not your friends. Delta and Bank of America do not care about the arts, they do not care about Shakespeare in the Park, and they do not care about you. Since the withdrawal, there have been calls from the Left to boycott Delta and Bank of America (there have also been similar calls from the Right to boycott them for funding the theater in the first place). It is fine to castigate these corporations for pulling out, fine to boycott, fine to levy public pressure against private or public entities to encourage more art-friendly behavior. What we must not do however, is be surprised by the withdrawals of corporate funding –- they are expected, and any notion to the contrary affords corporations too much agency, too much conscience; it is a dangerous mental game.

Corporations exist to make money. I previously wrote that when billionaires purchase art works they do so as a sort of performative anti-capitalism. So too with the corporate world, which, as I wrote in that same article “actively undermines the alternative mode of living that art represents, both by commodifying works of art and by creating the social conditions that commodify life in general. In reaffirming the value of art in one of the only ways that society understands (that is, capital), the billionaire class simultaneously justifies their accumulation of wealth –- when billionaires spend their money on art it is, as John Berger writes, ‘art-as-a-cultural-alibi-for-existing-society.’” Delta and Bank of America support the arts as long as art is safe to support. They do it for the cultural capital and public good will that it generates. They do it as long as it does not challenge their profit margin. But the moment that “Julius Caesar” became in any way toxic, they dropped it.

And this is to be expected. Indeed, we shouldn’t even be too upset by it. It is impossible to lament the withdrawal of corporate sponsorship without simultaneously bolstering and buying in to (pun intended) the myth that corporations are somehow benevolently disposed towards their consumers. Any lamentation implicitly assumes that corporations can and should act otherwise; it attributes to them some kind of conscience, some kind of motivation beyond the wallet, some kind of ideology beyond the market. (A vulgar analogue –- we are not disappointed when shit stinks. We may be upset that this is the nature of shit, but we cannot and do not expect it to be otherwise, we do not become angry that this particular shit decided to stink. Because stink is the nature of shit.)

Money making is the nature of corporations. Yes, they are run by people, and people have agency, and therefore make decisions, and therefore can decide to flout the entire corporate ideology in order to altruistically patronize the arts no matter the cost. And perhaps we should make this demand. But it seems unrealistic ever to expect this from the corporate world. There is an entire bureaucratic apparatus in place –- from the CEO to the shareholder to the janitors to the junior associates to the friendly governors –- that keeps a corporation whirring, that keeps it monomaniacally oriented towards a single goal. Bureaucracies, corporate or otherwise, have built in redundancies to guard against short-circuit. In the confines of market ideology, altruism is a short-circuit. The banality of evil is equally the banality of work.

Again –- corporations exist to make money, only; I cannot repeat this enough. You must –- this is important –- you must disabuse yourself of any notions to the contrary. The anthropomorphism of corporations that leads us to be upset when they act precisely as corporations will inevitably act is the same anthropomorphism that allows Apple to put a sleek and shiny face on its human rights abuses. It’s the same attitude that allows Facebook to blather on about community while selling your data and cultivating an atmosphere of sectarian idiocy. It is the same notion that allowed Mitt Romney to say, in full seriousness, that “Corporations are people.”

Disappointment always implies hope –- we had hoped the corporations could understand the play. We had hoped the outcome would be otherwise. Abandon your hope for corporate benevolence. It is only in this abandonment that we can begin to see and think clearly, to allow corporations to do what they do — make money, churn out products — and restrict them only to that. You do not need Delta or Bank of America to provide meaning, to legitimize the arts, or even to support the arts (a bit of a catch 22, that patronage). You need them to fly planes and store money; this is it. Any infiltration into any other aspect of your life only enhances the influence and domination of market ideology. We must exist separate from the market if we are to exist with any dignity at all.

Despite the backlash that Romney’s statement received at the time, it seems as if people still continue to give credence to this preposterous notion. So, again, say it with me – corporations are not your friend, they are not capable of human relations, they exist to make money, this is it, this is all.