Is There Anything More American Than The Ten Commandments? 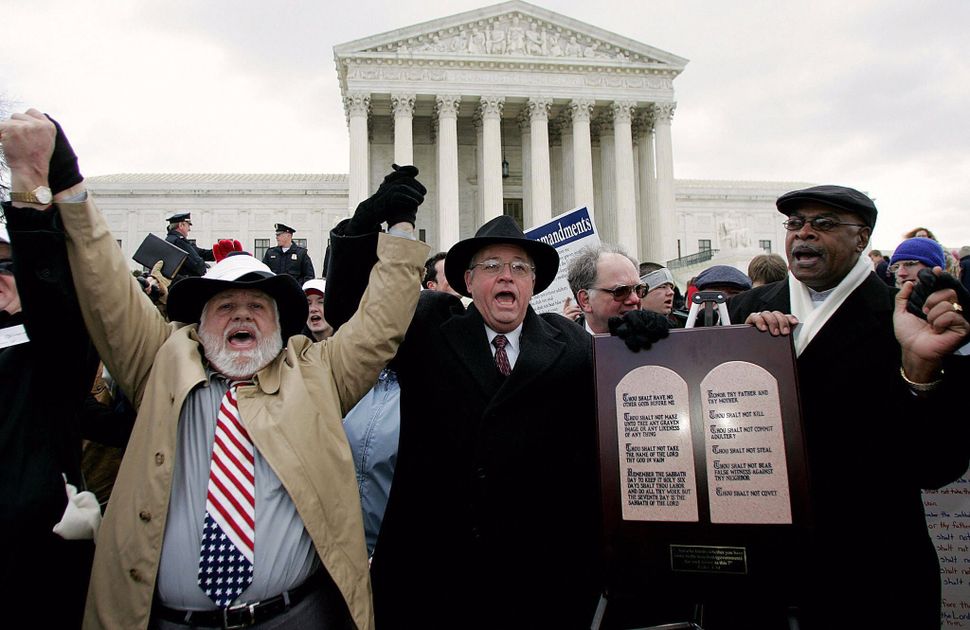 The 10 Commmandments Image by Getty Images

Talya Zax: What prompted you to begin researching the place of the Ten Commandments in American culture?

Jenna Weissman Joselit: Actually, a more contemporary event. Usually a historian like me works from a kind of historical moment or phenomenon. I was watching TV, and I came across a group of demonstrators outside the U.S. Supreme Court who were carrying aloft a cardboard, miniaturized Ten Commandments. This was in 2005, and they were awaiting the Supreme Court’s decision about whether the Ten Commandments can be displayed in public. I said there’s a story here. A bit later I saw an episode of “Nightline With Ted Koppel” that featured what was called the “Faith and Freedom Tour,” in which a group of veterans from the South took another Ten Commandments, this one a 5,280-pound version which had been forcibly dislodged from the Alabama courthouse, on the road. Like the mishkan [tabernacle] of old, being taken through the land as people queued up to express their appreciation of it. So that’s how it started.

As you researched this book, did you come upon any stories or facts about the Ten Commandments in America that especially surprised you?

The piece that I had no idea about was the discovery of an alleged ancient version of the Ten Commandments buried really deep in a burial mound in central Ohio. The idea that there would actually be an ancient, ancient version of the Ten Commandments buried in an Indian burial mound was too good. I came across that in a footnote in a former student’s dissertation. And then I went to the source, of course, and just uncovered a plethora of materials about this discovery on the eve of the Civil War. That was delicious. It’s such a human story: It was clearly a hoax. It was great to have a piece with so much Americana, including treasure hunting, and the connection to the Mormons, the need to believe that America is really blessed and special and if we can’t find that, we manufacture that material ourselves and plunk it in the land. One of the things that really surprised me is how the story of the Ten Commandments in America is really the story of circulation and expansion from little tchotchke things to monuments. Even though I’ve titled the book “Set in Stone,” the puncher in the book is that it’s not. It’s mutating. It keeps on assuming new forms and new power. It’s that history in America, the presence of the materiality of it, that renders the story really distinctive, and America really distinctive, because no other country in the world, not even Israel, makes the same amount out of the Ten Commandments that America does. 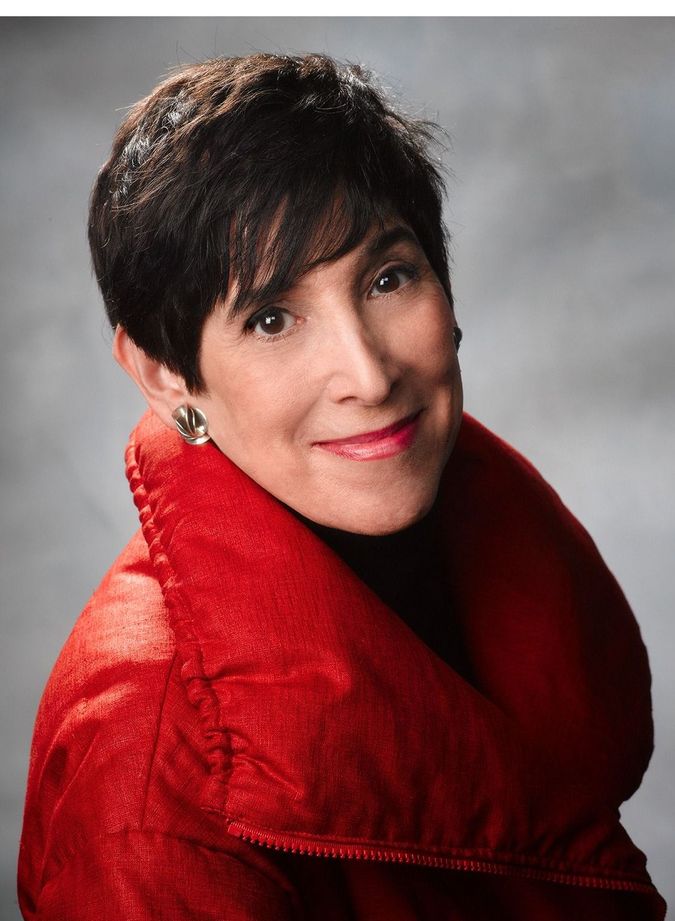 What are the strangest physical versions of the Ten Commandments that you’ve come across?

I think the charm bracelets, which I started to collect. They’re a hoot. The idea of the Ten Commandments reduced to a charm!

The other weird item is this thing that you can get now. It’s portable, it’s a stand-up thing; it’s called the Ten Commandments Stand-Up, and it’s about 5 feet tall and it’s cardboard. You can purchase it online, and you can prop it up in your home. It’s described as “a sturdy decoration you’ll use over and over again.” So hilarious. It’s not intended for a Jewish audience; it’s not trotted out for Shavuot.

And what representations of the Ten Commandments in American culture have you found particularly endearing?

The one that I think is the most delicious comes from the 1923 version of the film [“The Ten Commandments”], the first blockbuster that related to the Ten Commandments. I loved the ’23 one because it’s a silent film, and therefore the gestures are even bigger and bolder. There’s a scene where Moses is set atop this very craggy mountain, and the finger of God is sending out into the mountainscape the Ten Commandments, and they hover in the air a little bit, and then they kind of dissolve like fireworks. It not only literalizes the way in which the Ten Commandments are inscribed, but it uses the power of electricity, which was pretty new at the time and very exciting. Harnessing all of that quite literally to the Ten Commandments, that’s an incredibly powerful moment.

When you started this project, could you name the Ten Commandments?

Since both of those religions sprung from the Jewish tradition, shouldn’t they just go with our version?

Americans are really blessed with this profound amount of cultural illiteracy. You would think that they would know that the Ten Commandments were originally a form of covenant between God and the ancient Israelites, but along the line they’ve forgotten that and then they’re surprised when Jews lay claim. I’m always very sensitive to the way in which Jewish histories get played out or misunderstood or appropriated. I was sensitive to the ways in which America has nationalized what had once been a relationship between one group of people and their God. That really came to the fore in the chapter about the shul politics down on Norfolk Street [on Manhattan’s Lower East Side]. The congregation hires a very up-and-coming architect who designs this very large stained-glass window for the sanctuary. It was fashioned in the round. There have never, ever been Ten Commandments fashioned in the round. One could see why the architect would have thought this a grand idea. Initially the congregation was fine with it, but then little by little, a vocal element decides that this Ten Commandments is too something, and they want to get rid of it but they can’t, because they just put it in.

I was really sensitive to the debate about why they would want it to go. It really pivoted on the idea of neighborliness. It’s one of the points of contact between Jews and Christians. The visual politics of it were such that they didn’t want to have a Ten Commandments that looked like no other Ten Commandments.

Why do you think the Ten Commandments have become such a uniquely potent symbol of American culture?

There are two things embedded in your question. One is that it reflects the belief that America is special, that it’s heir to the biblical tradition, that it’s the new Promised Land. That’s why the business about finding an ancient Ten Commandments relic in central Ohio is so key.

The other thing is that what renders America so American is the porousness of the divide between religion and culture. If you’re a purist you could read this book and groan at the prospect of a Ten Commandments bracelet, or Moses as an action figure doll; you could see it as a corruption or a diminution. I actually think it’s the other way around: It speaks to the power of religion. Religion doesn’t stay put; it manages to seep into every aspect of American culture. And I think that’s a fascinating bit of business. And we’re reaping the consequences all the time. There’s a sweetness or innocence or will to believe that’s very optimistic. America does not, at least notionally, have an established religion. I think the Ten Commandments [do] the work of providing a shared religious identity, at least until recently. These days, they are largely the property of the folks on the religious right, who instead of seeing the Ten Commandments as an opportunity to be more inclusive see them in more coercive terms, like, “This is America.” Those who are insistent that they continue to fit the mold are really trying to hold change at bay, I think.

This book has come out at a time when issues of religion in America, as well as religion-based harassment and discrimination, loom large. How do you think your book can inform this moment, and help us understand it?

I would hope that it would provide the larger historical context. These things that are going on today don’t pop out of nowhere. I do not hold any hopes that the book is going to change anybody’s behavior, but I would hope that as it’s being discussed and taught, those who are attentive to its messages will realize the trajectory of religion in America is very fraught and complicated.

How would you describe the specific role of the Ten Commandments in shaping American Jewish culture? How do you see that differing from how they’ve helped shape American culture at large?

You conclude your book with the observation that the Ten Commandments took deep hold in America because they gave the country, in your words, “pedigree.” How do you think that particular relevance has changed over time?

I think in current America, that pedigree doesn’t hold as watertight. The Ten Commandments are increasingly being taken off their lofty pedestal. I think the point is that that pedigree, as all pedigrees, [will] hold fast for a very long time, and then other forces come in and challenge it. For Americans, the Ten Commandments furnished them with tangible proof that they were distinctive and blessed.

Is There Anything More American Than The Ten Commandments?