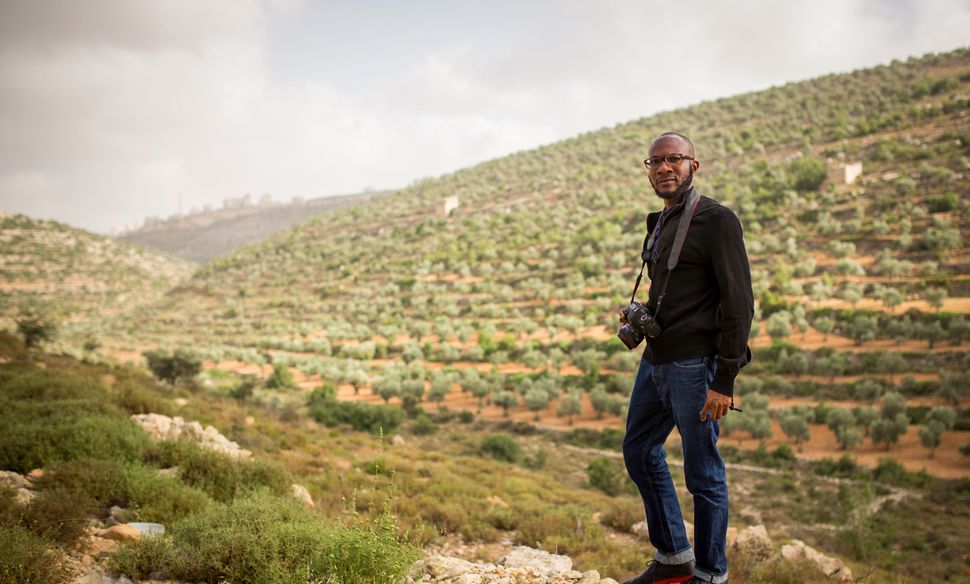 I’ve started this review three or four times by now, and each time I’ve deemed my writing inadequate and started over again. The book, quite frankly, needs to be seen for itself. Like all great works, it defies paraphrase – it cannot be brought under the dominion of a single interpretation. But it is the reviewer’s job to review – so we press on:

The book is Teju Cole’s “Blind Spot,” a collection of photography and prose – though this description, while factually correct, does not truly explain its contents. It pairs photographs by Cole, taken all over the world – from Bombay to Tivoli, NY – with texts on the adjacent page (or is it the other way around? Which takes primacy? This book will have you questioning, among so many other things, the ordering of such statements – in the text accompanying a photograph of Rainbow City Cole writes “when Oedipus was finally told by the blind seer…all that had happened, he took out the long golden pins from his mother’s garment and used them to blind himself. N says, ‘interesting that you say his mother,’ and not ‘his wife’”).

The texts rarely comment on the photograph – more often they offer some kind of musing, on the surface unrelated to the photograph, but which, upon reflection, reveals, or perhaps more accurately, creates layers we would not otherwise see. A photo of a field in Gadsden Alabama is just that, a photo of a field, until it isn’t, until the text is about “William Moore,” a white anti-segregation “activist” (though the word seems cheap in this context) “shot to his death on a highway near Gadsden by God knows who.” In this context, the photo’s pastoral calmness becomes a violent blankness, a murderous indifference. It becomes, for me, those fields in Poland surrounding Treblinka – solemnly beautiful until you remember the makeup of their soil. The point is that it becomes, that this photo becomes anything at all. This is what this book is about, the becoming – the way two mediums interact, the way both text and photograph are filled with latent meaning – no – filled with absence of meaning until it is posited, filled with the potential for meaning. So, when the question arises – is meaning in these photographs invented or discovered? – the answer is, as it so often is, both.

So the book is about how meaning is created in photography – how a photograph exists in a sort of superposition, both empty and full until the power of the observer acts upon it. But it is about many other things as well. It is also about travel, about tourism. It is, in its own way, the quintessential 21st century travelogue. The photographs come from 73 different locations around the world – some tourist hubs, some not – but regardless of location, Cole never presents us with obvious landmarks. Rather, as Siri Hustvedt puts it in the book’s introduction, Cole’s photographs “are not idealized art photos…They emphasize the pedestrian.” And now, in a time when travel is easy (for a certain segment of the world’s population) and when, even for those who do not or can not travel, the proliferation of images on the internet allows a person from Kansas City to be more acquainted with the intricacies of the Taj Mahal than with certain neighborhoods in their own city, the pedestrian, the everyday, the places excluded from the travel guides and Google image searches are the last things left for a traveler to explore.

And so Cole photographs construction sites, fences, a smudged window, garages, parking lots, puddles. It is easy to fall into a trap here – to pretend as if these pedestrian images are images of authentic life in a given location, life as “locals” live it, the touristic obsession du jour. Parisians don’t visit the Eiffel Tower, they go about their lives noticing the construction that disturbs their sleep, the changing displays in the shop windows, the reflections in puddles after a storm – the daily detritus of existence. And so if we notice it too, if we scorn the monumental for the small, we can achieve some degree of authenticity, some degree of “Parisianness.” This is the fantasy. But the only way to be “authentically” Parisian, is, of course, to be Parisian. You, traveler, notice the everyday in a language you do not know, in a city you do not know, in a culture that is not yours – you recognize the everyday as an outsider and so for you it is not “everyday” nor “pedestrian” but something new, novel, and exciting. Cole is, of course, aware of this problem. In a text accompanying a picture from Lugano he writes, “I don’t want to move to Switzerland. Quite the contrary. I like to visit Switzerland. When I’m not there, I long for it, but what I long for is the feeling of being an outsider there and, soon after, the feeling of leaving again so I can continue to long for it.” These are not the words or images of a man desperate for authenticity in the sense that most tourists shallowly understand it – Cole’s authenticity is the only one truly available to the tourist, to be authentically outside.

And so the book is about tourism and authenticity and the impossibility and perhaps even undesirability of ever being “inside.” But it is about many other things as well. It is also about difference, about distinction and its lack. There is a photograph in “Blind Spot” taken in Bombay – shot from inside a car we see a seatbelt and window, then from the window other cars, populated by other men, then sidewalk, then wall. At first glance, I thought we were in Manhattan – a color photograph by Saul Leiter immediately came to mind. But upon closer inspection, we are very obviously not in New York, we must be somewhere else – the cars don’t look right, the walls are too gritty, too concrete. Cole writes (on a different photograph), “All cities are one city. What is interesting is to find, in this continuity of cities, the less obvious differences of texture….what is everywhere but is everywhere slightly different.” Our monuments – our Eiffel Towers our Taj Mahals our Empire State Buildings – connote place, yes, but because they are known primarily through images, they connote themselves more than anything else – they stand within, but at the same time, entirely apart from their cities. It is local difference that truly makes a place, that truly distinguishes one city from another.

But, the point of the Bombay photo is that we could be in New York, or anywhere at all. Cole’s intense focus on the pedestrian means that it is sometimes difficult, without recourse to the text, to figure out where his photos have been made. The effect is more noticeable when the photographs are taken relationally (as they are meant to be taken) rather than individually. Visual themes emerge –  objects and their shadows, doubles, images of places embedded within the images themselves, signs signifying only other signs. Things have their local copies and signifiers, but similar scenes also take place across space, and in one particularly arresting photo-text pairing from Figline Valdarno, time as well. In the confines of the book, a man in a hat shadowed by his wheelchair-bound double in Berlin no longer only references this pair of doubles (and Magritte) but also a ladder and its shadow in Fort Worth, and a tree trunk branching in two in Lebanon. Global capitalism has caused a certain leveling of distinction – the same chain shops and restaurants, the same material desires – but Cole’s photographs suggest that this homogeny was, to a certain degree, already present. His mission, it seems, is to get underneath this homogeny to rediscover distinction.

But I am not sure he is successful. Photography is, as Sontag writes, an “elegiac art” – or as Barthes writes (and here I’m paraphrasing), each photograph depicts the always already dead (antique photos of a city, as these photos will someday be, simultaneously are, and have been, and will die, and are now dead). I wonder, looking at Cole’s photographs, if this celebration of small distinction is also an elegy for distinction’s loss. Of the eradication of distance. I wonder if the continuous city will one day truly be devoid of difference, everything subsumed under a single heading, with only the shadows, ghosts, revenants, and doubles of Cole’s photographs populating the global metropolis living as the unclean residue of distinction.

This book does not offer answers and indeed, the hidden, the secret emerges as another theme – things hidden beneath cloth, behind windows, behind darkness. Each hidden thing contains a secret, but it is only the presence of the secret that we’re given –  it is the hiddenness, the thing that does the hiding that draws our interest, that becomes the object. Even when the secret is peeled back, nothing is revealed. The book’s final image — a boy in Brazzaville seen against a red railing and the sea — appears twice. First, his eyes are covered in shadow. In the last image however, the photo has been reprinted and brightened. His eyes are revealed – they do not look at Cole (that is, the viewer, us). Rather they look somewhere “off screen,” somewhere indeterminate. The boy remains a mystery – the darkness was the secret and the object, now his eyes take its place. “The collection” Cole writes, “is also what is not there. Museum of wounds.”

And so this is a book about difference, and its disappearance, and its reemergence. It is about the hiddenness of things as a thing in itself. It is about these things but it is about so many other things as well. But enough, I cannot enumerate everything this book contains because ultimately it defies categorization, because it is all of these things and none of them. It wears its influences on its sleeve – Sontag and Barthes and Leiter and John Berger and Luigi Ghirri (Ghirri most of all) and Gueorgui Pinkhassov and Vilhelm Hammershøi and Maurice Merleau-Ponty and Jean Baudrillard – but it is not merely the sum of its influences either. The book is informed by all these figures but it stands on its own, unique.

That I have been able to write so much without truly making a dent in the multitudes contained in this book is a testament to the depth of the work. That I still feel this review to be inadequate is a testament to something essential, I think, about the book and poetry at large (and this book is poetry, at least as Cole defines it (with a nod to Tarkovsky) – as “that link that allows different kinds of excellence to understand one another”). Cole writes, “What is seen is greater than what the camera can capture of it, what is known is finer than writing can touch.” In the end the book is something incommunicable, but it has successfully transmitted this incommunicability. The paradox at the heart of Kafka and Benjamin and Beckett is at the heart of this book as well – the communicability of incommunicable, understanding that this, whatever it is, cannot be understood. But it is in that incommunicability, that blind spot, so to speak, where the revelations are lurking, if they lurk at all.