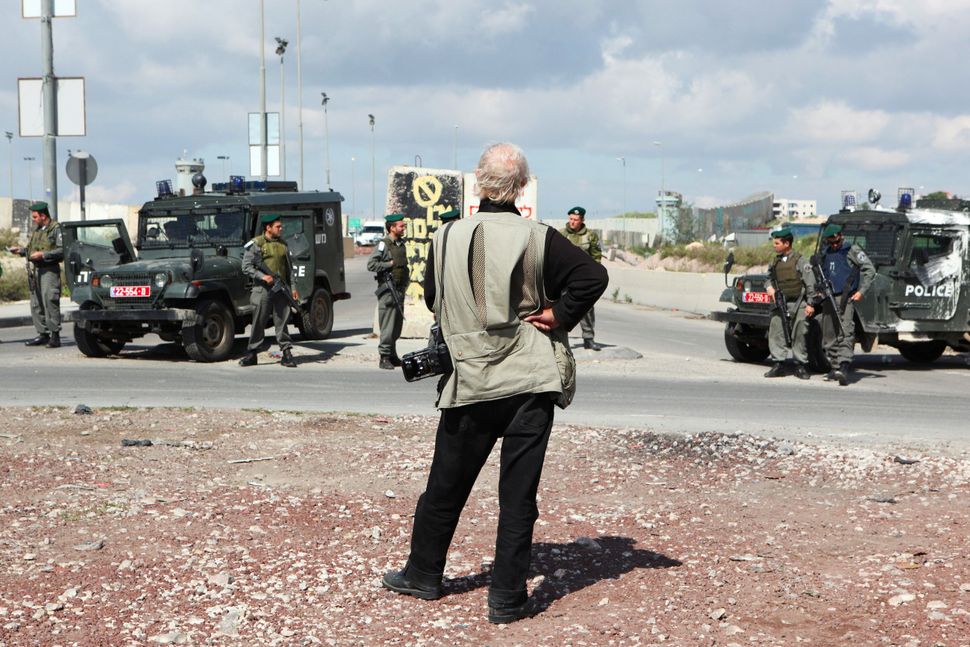 Before the late screening of “Shooting Holy Land” (initially released in 2015) at Anthology Film Archive in the East Village – added by popular demand after a sold out first showing – Gilad Baram, the Israeli director of the film, and septuagenarian Magnum photographer Josef Koudelka, the film’s subject, gave a brief introduction. Koudelka was spritely despite his age and his thinning crop of gray hair – Baram, considerably younger, seemed humbled and happy just to be in the legendary photographer’s presence. Koudelka said hello in his thickly accented English, affectionately ruffled Baram’s hair, told a funny but somewhat confusing anecdote about a fellow Magnum photographer, then concluded by imploring the audience, in good humor, to (I paraphrase here), “be merciful” when watching the film.

The request was self effacing and, despite Koudelka’s unparalleled talent, in no way contrived. But knowing his work, it was hard to believe that this man — so warm, so humble — was the same man behind the camera. Because Koudelka’s photographs are not merciful. Looking through “Exiles,” or “Invasion: Prague 68,” or “Nationality Doubtful,” all shot in that same intense black and white, Koudelka’s photos have a real sense of loneliness, of desolation, of disconsolation. They are, in a word, merciless. This is not to say that he is without humor – some of his photographs can be downright funny – but Koudelka’s humor always seems to be the humor of Kafka, of Krasznahorkai, that is, that specifically Central European sort of humor, the kind that scholar and critic Marjorie Perloff loosely defines as “an irony less linked to satire (which posits the possibility for reform) than to a sense of the absurd.”

That same mercilessness and ironic humor is on display in Baram’s film and the work Koudelka produced in Israel. It almost feels strange to call Baram’s documentary a film. Nothing happens, hardly anything is discussed, scenes shift abruptly and, after about an hour, the film just sort of ends. Despite all this, or perhaps because of it, however, “Shooting Holy Land” is immensely successful, enjoyable and instructive; it is a master class in minimalist — storytelling is the wrong word – so let’s just say, for lack of a better word, filmmaking.

The film, screened in conjunction with the International Center of Photography’s wonderful “Magnum Manifesto” exhibition, follows Koudelka (a member of Magnum and perhaps the world’s greatest living photographer) as he photographs Israel and the West Bank, with particular attention focused on the security wall.

Despite the subject matter, “Shooting Holy Land” is remarkably unpolitical, at least in an overt sense. Yes, both Baram and Koudelka are clearly against the existence of the wall – Koudelka, at a couple points, compares it to the “Iron Curtain” that he lived behind in communist Czechoslovakia and Baram’s editing choices clearly focus on the wall’s negative aspects, with particular attention paid to Hebron, one of Israel’s most obviously terrible situations.

The wall is also plainly ugly. Concrete, imposing, foreboding, gray – it has all the aesthetic markers of authoritarian oppression. Regardless of its purpose or your ideological bent, the wall is, in a purely optical sense, hard to stomach.

And this ugliness seems to be Koudelka’s primary objection to the wall. Aside from the few aforementioned exceptions, he does not comment on the political situation. Rather, the taciturn photographer most frequently comments on the ecological problems of the wall, on the violence done to the landscape. In “WALL”, the book made up of the pictures in “Shooting Holy Land,” the Israeli wall seems less to lie upon the earth than to rise out of it like the product of some tectonic disaster – a wound upon the land. Many of the compositions show the wall splitting the landscape, the earth itself, in two. The focus, again with rare exception (one photo from Hebron featuring children in the far right of the image stands out to me), is on the land, not its people. 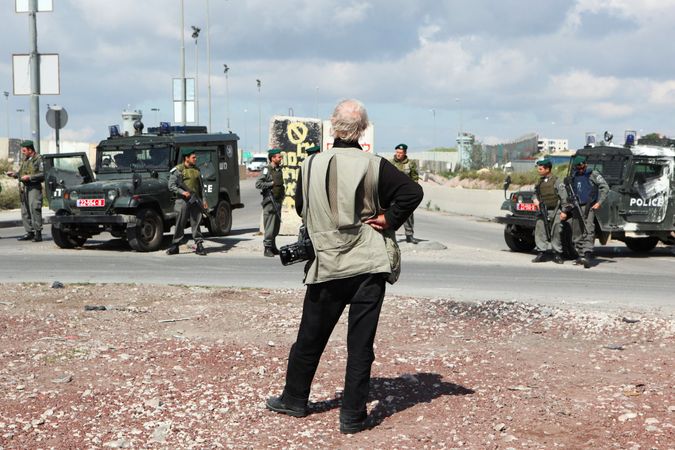 This is not the first time Koudelka has tackled this problem in this format. In his photo-books “CHAOS” and “Black Triangle,” the photographer utilizes a panoramic camera to illustrate the violence that humanity inflicts upon the earth. “WALL” most resembles “Black Triangle” in its focus on a single subject (“Black Triangle” centers upon the Ore Mountains in eastern Czech Republic – an area devastated by unchecked and unregulated coal mining). The pictures in “WALL” and “Shooting Holy Land,” however, in contrast to both “CHAOS” and “Black Triangle,” are more narrow in their icons and objects – concrete and barbed wire figure in almost every shot, setting the two features up as ubiquitous, immutable parts of the Israeli landscape.

But the film, as previously stated, is not really about the wall, or the conflict. Rather it is about Koudelka and his process. About photography, about a way of seeing. From the first shot to the last (with the exception of a couple brief interview interludes), the film adheres to a strict formula – static shots show Koudelka moving and fidgeting around a landscape looking for the perfect shot. We watch him, and wait for the sound of the camera’s shutter. Then, more often than not, we are given a look at the resulting image.

Watching Koudelka look through his camera for extended periods of time, we are forced to be patient before the shot, forced, like Koudelka himself, to take everything in before we hear the click. Eventually, we start to consider the scenes from a photographer’s point of view, we begin to compose our own images, to see the scenes from yet another degree of remove – first, removed by the temporal and physical distance of film, and then again, the scenes on the film become potential photographs — they belong to us as much as the director who created them and the photographer who inhabits them. We are given very little direct insight into Koudelka’s method – but simply observing the care with which he takes his photographs is instructive. When looking through a photobook or exhibition, we are given the best the photographer has to offer and it seems as if the photographs are the products of serendipity combined with immense skill. Missing are the contact sheets, the missed takes. Baram’s film fills in the process. It shows us that, in addition to a good eye and good timing, photographers of this caliber possess an immeasurable dedication to craft. 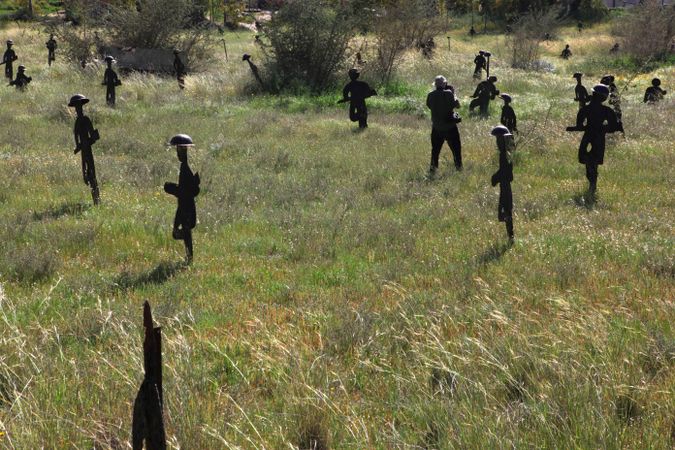 But, taking a step back again (or perhaps forward) from Koudelka and our photographic way of seeing within the film itself, we should take a moment to consider the scenes that Baram has created. The film’s director is obviously a photographer himself – not just because of the subject matter, but because of the photographic compositions and the static nature of the camera. It may sound like a truism to describe a film as “moving photographs,” (though this doesn’t really capture its nature), but Baram’s film is truly a collection of “moving photographs.” He sets up beautifully composed shots – which, due to the static nature of the camera, initially appear like photographs – and simply allows Koudelka to move around within the composition. Koudelka then, while photographing the landscape, becomes a part of it – he composes images while fulfilling an important dynamic role within Baram’s own compositions. And so we are given four layers of images from this film – the one on screen, the one we compose ourselves, the one Koudelka sees, and finally, the finished photograph that he makes.

Some might object to turning a political situation into an aesthetic one – but such objections, I think, miss both the nature of politics and aesthetics. Aesthetic violence – and the wall, regardless of its purpose or efficacy (and it has certainly been effective in saving Israeli lives), is aesthetic violence – is, however subtle, as in the case of this film, always political and political violence often takes the form of aesthetics. Baram and Koudelka’s work is a testament to this relationship – the jagged divide, the ecological destruction, the terrible blankness of the concrete all attest to the deeper fissures separating the land and its people, from each other and from themselves.