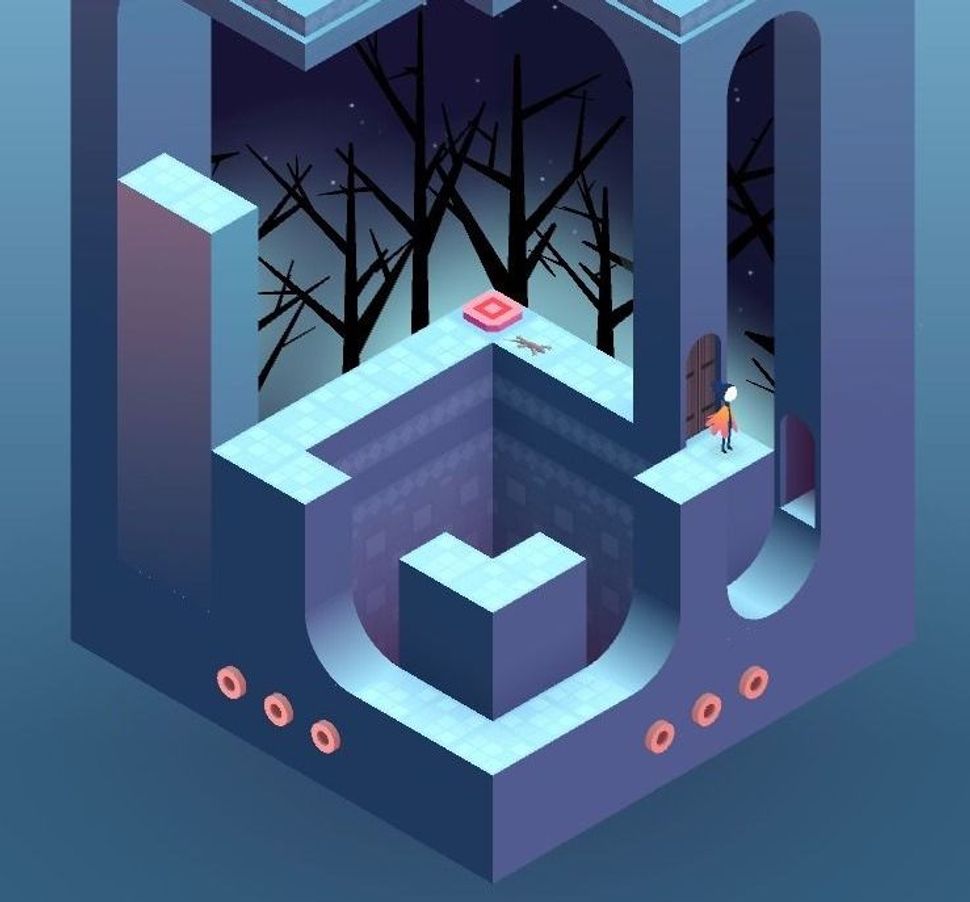 Earlier in the month, British game design firm Ustwo Games, released the follow up to 2014’s wildly successful phone and tablet game Monument Valley. For the uninitiated, Monument Valley is a sort of puzzle game – you move your character around an isometric MC Escher like structure, manipulating levers and rotating towers, in order to reach the end of a given level. The gameplay is, particularly for a mobile game, innovative and, at first, disorienting. Much of the movement is accomplished via the creation of Penrose triangles – an impossible object created by Swedish artist Oscar Reutersvärd. Unrealizable in physical form, the Penrose triangle is a sort of optical illusion – a triangle, simultaneously three dimensional and two dimensional, that folds in upon itself ad infinitum.

In the first iteration of the game, you play as Ida – a princess who roams through the monuments (shrines to “sacred geometry” in the in-game mythology) looking for absolution for some unnamed transgression, encountering crows and ghosts, alternatively guiding and chastising, along the way. The plot is vague, but despite the barebones construction, there are still some poignant moments – as in the game’s best level in which you descend into a cave full of graves.

In Monument Valley II, the gameplay is roughly the same (with the addition of a couple new tricks), but the plot is more fleshed out. In II, which takes place in the same vaguely defined world (though the crows are gone), you play alternatively, and sometimes simultaneously, as Ro and her daughter. The game starts with Ro’s daughter mirroring all of her actions, but around a third of the way through, the two characters part ways and make their own paths. By the time of their reunion, you are able to control both Ro and her daughter independently. It is a coming of age story complete with ghosts of matrons past that, despite its saccharine moments and obvious metaphors (in one level Ro’s daughter literally blossoms out of a geometric plant), is still touching and, in these times, refreshingly earnest and kind. 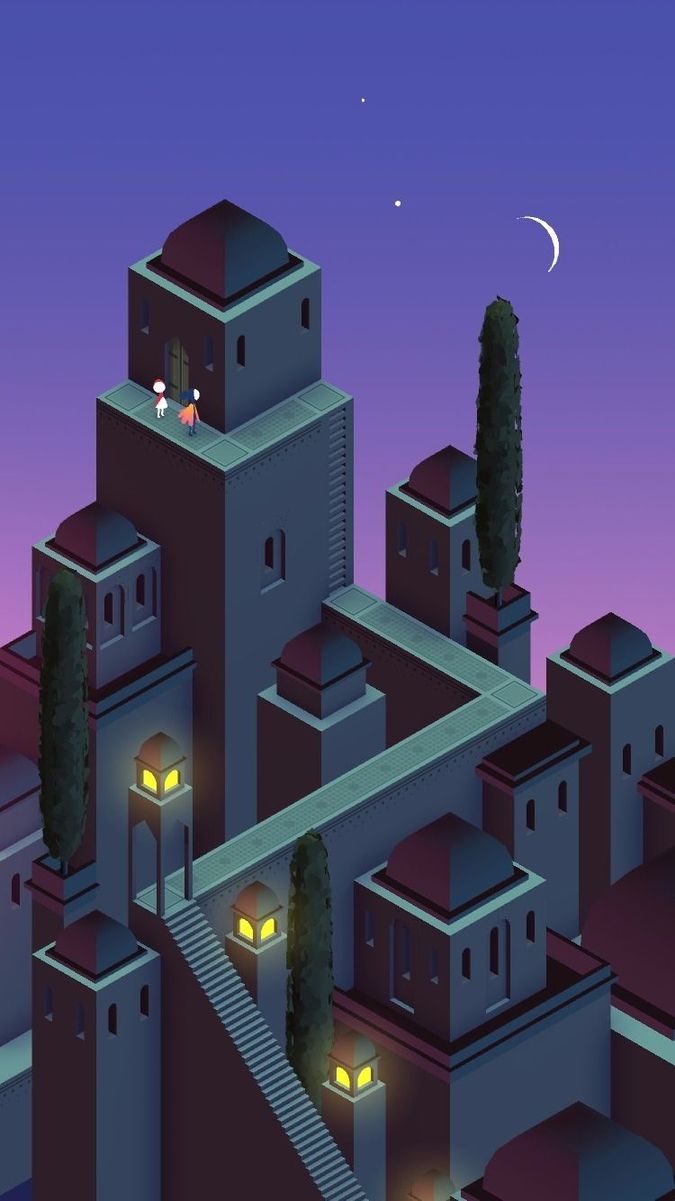 But it isn’t the gameplay so much as the visuals that make Monument Valley II so distinctive. Even though Monument Valley I was an aesthetic achievement, the visuals in the sequel are markedly improved. Going back to the first game after the sequel, despite a difference of only three years, the visuals seem oddly dated – the lines of their construction more obvious, making each level a bit less immersive. Monument Valley II, by contrast is a much smoother viewing experience. 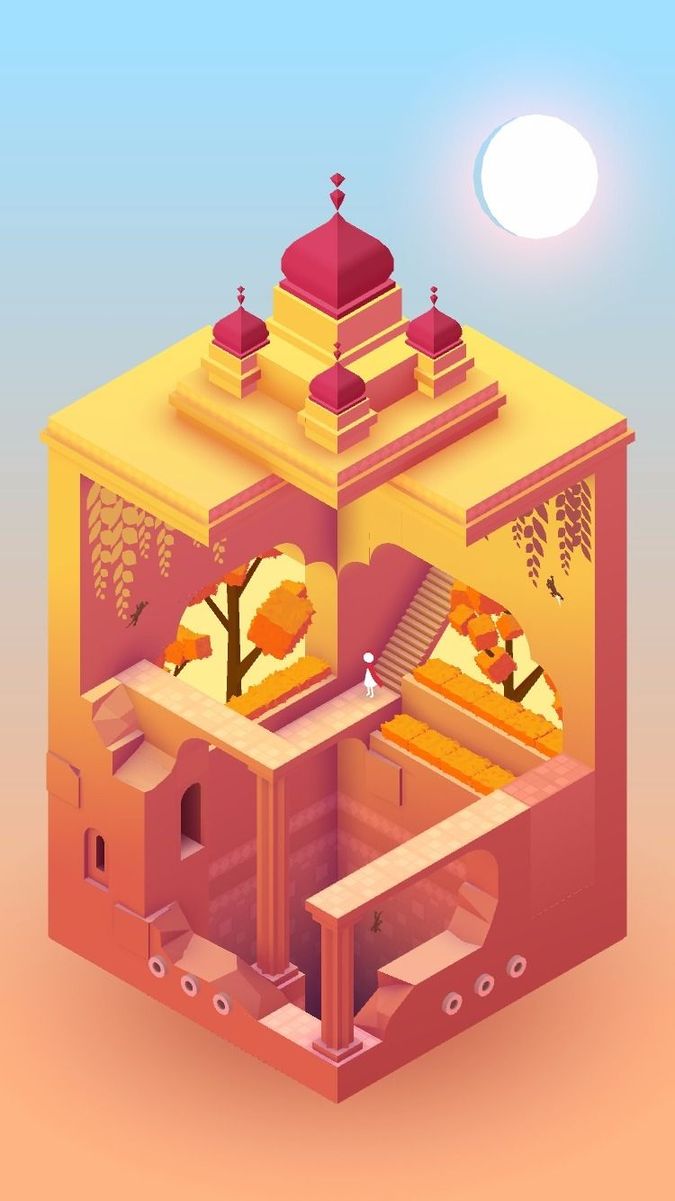 The predominant architectural style of the game has remained consistent from the first entry. It seems, to me, to be modeled on the drawings of MC Escher, Moorish architecture (the Alcazar seems to be a key reference point) and, fittingly, Islamic geometric art. Alexandra Lange wrote an incredibly detailed article for Curbed about the real world visual influences behind the first Monument Valley. It’s worth reading in full, but here is a (truncated) list, with the exception of the previously mentioned Moorish and Islamic geometric influences, of some of the architecture that she cites: Indian step wells, the isometric architectural drawings of Peter Eisenman, the work of Spanish architect Ricardo Bofill, Vermont marble quarries, the onion tomes of Russian Orthodox churches. I’d like to also add the sunset colored walls of Luis Barragán, Sol Lewitt’s “Open Cubes,” Roman Aqueducts, and the fantastical Quinta da Regaleira and the Pena National Palace in Sintra Portugal.

The backgrounds too are wonderful to behold. Influenced by Japanese silk screens, they’re both lush and sparse at the same time. Some offer a sense of dimension – a moon in the background, flowers strewn about a lagoon – while some are abyssal. The abyss is not always black though. Often the backgrounds, like the structures themselves, are presented in beautiful colors – deep purples, sumptuous greens, and dreamy desert tones. Even when the backgrounds are entirely black or gray, the small dash of color provided by either Ro or her daughter makes for a nice contrast and also highlights the immensity of the structures you’re being asked to navigate. 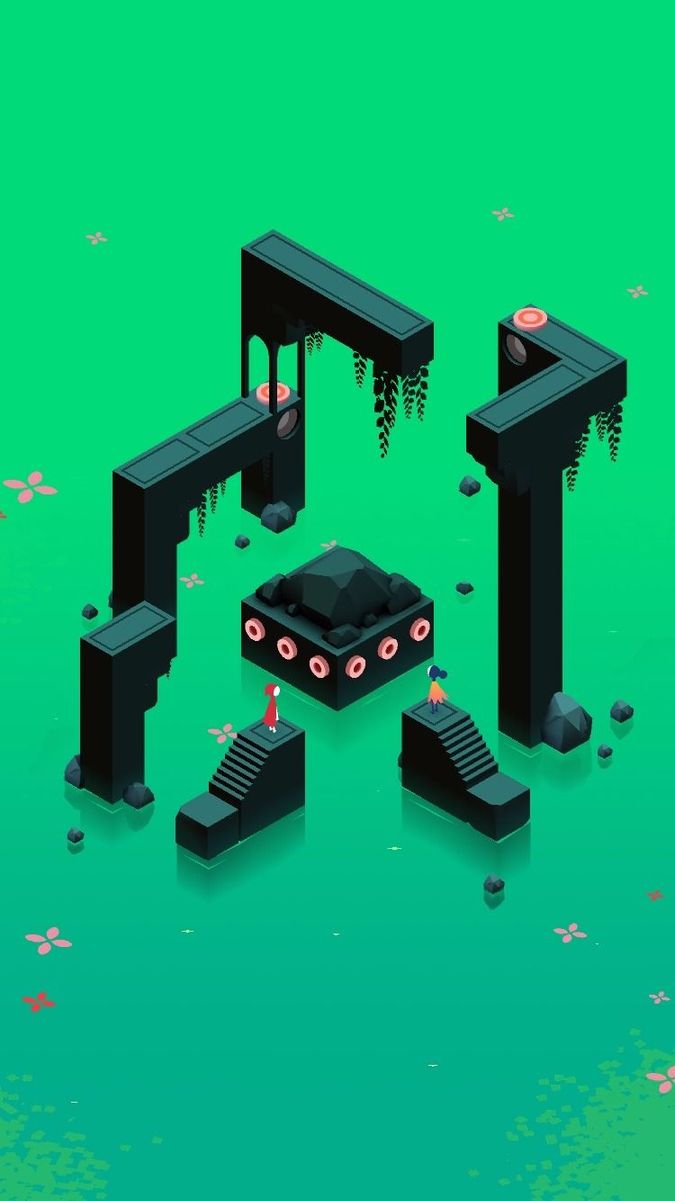 In an article in Wired on the occasion of the first game, developer Ken Wong is quoted as saying “We hope players will stay engaged for the same reasons they might enjoy a walk through a museum or an art gallery.” While this is an analogy fraught with critical danger, I think it is a fairly apt description of the experience of Monument Valley II. The game, like a day at the museum, rewards and demands patience – the characters move slowly across the screen, the cut-scenes cannot be skipped, the world sometimes does not respond in an easily accessible way. The more you resist this internal dynamic of slowness, the less you will get from the experience just as in a museum the refusal to stop, or at least slow down, before the work renders the experience shallow to the point of meaninglessness. The game works best when you embrace the restraint of its design and the patience required to finish each level (patience is both a dynamic and a plot point) and simply luxuriate in the beauty of each background, each structure, and each manifestation of “sacred geometry.” 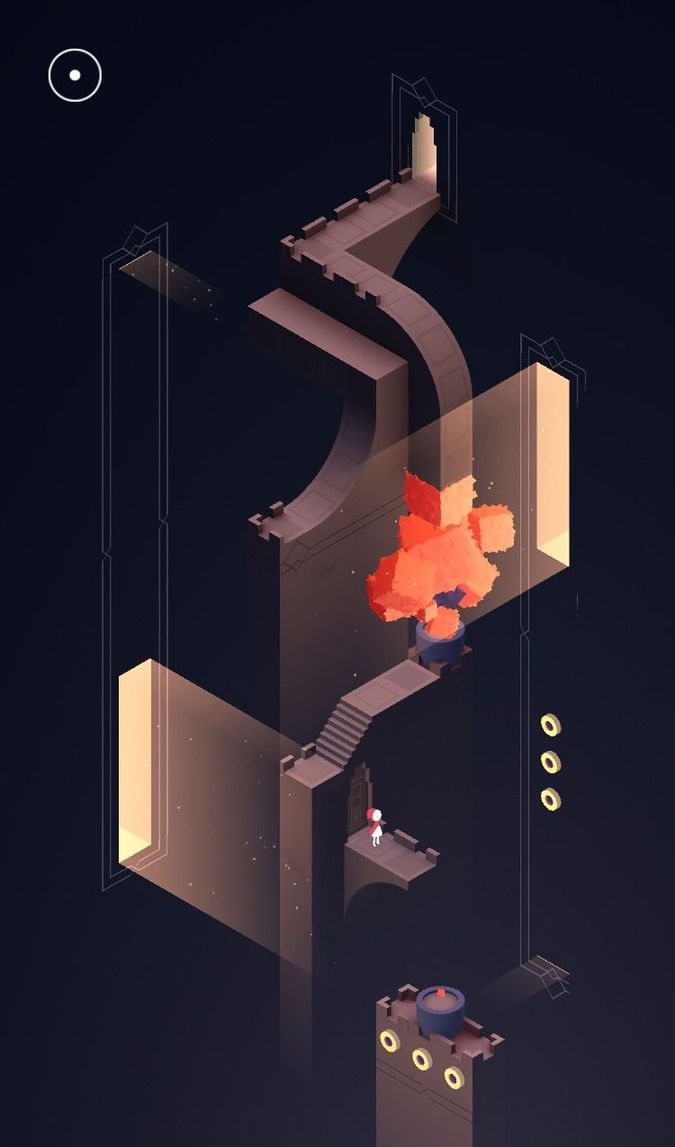 Now, the aforementioned critical danger is, of course, the “are video games art” debate. The comparison to a day at the museum places each level of Monument Valley II in the position of an individual work of art. And perhaps each level is itself a piece of art, but the whole question of whether video games are art seems ridiculous in the first place. I am just as loathe to throw my hat in with the “video games are high art” evangelists as with the stick in the mud austerity of Roger Ebert or Jonathan Jones. On the one side you get the sense that there is a sort of overstated case – a means to justify an obsession with games that society has deemed childish and, worse, as a justification for the misogyny and racism rampant in the gaming community (it’s not really misogyny if its in the service of high art, the reasoning seems to go). On the other side is both a misunderstanding of video games and a trenchant puritanism that relies on notions of art as ambiguously and poorly defined as the looser notions these critics are reacting against (Ebert’s idea that the interactivity of video games bars them from the becoming art is plainly idiotic).

On both sides however is a refusal to consider a game on its own terms. Both sides set up an implicit and, in the case of the anti-video-game-as-art crowd, an explicit hierarchy – requiring you to think about games only in relation to the more “established” art forms rather than to try to understand the form itself. In this article I’ve fallen prey to the same trap – offering comparisons to architecture and sculpture and painting to establish the “credentials” of Monument Valley II’s visual work. But it’s completely unnecessary and a bit patronizing really (I should say, I guess, that I do think video games can be art depending upon the context in which they are seen – these kinds of debates occur with pretty much every new medium, and the puritans almost always lose). Monument Valley II, is, on a purely ocular level, beautiful and on a gameplay level both disorienting and calming all at once. Just play, and look, and enjoy it for its own sake.

Monument Valley II can be downloaded for iOS here.