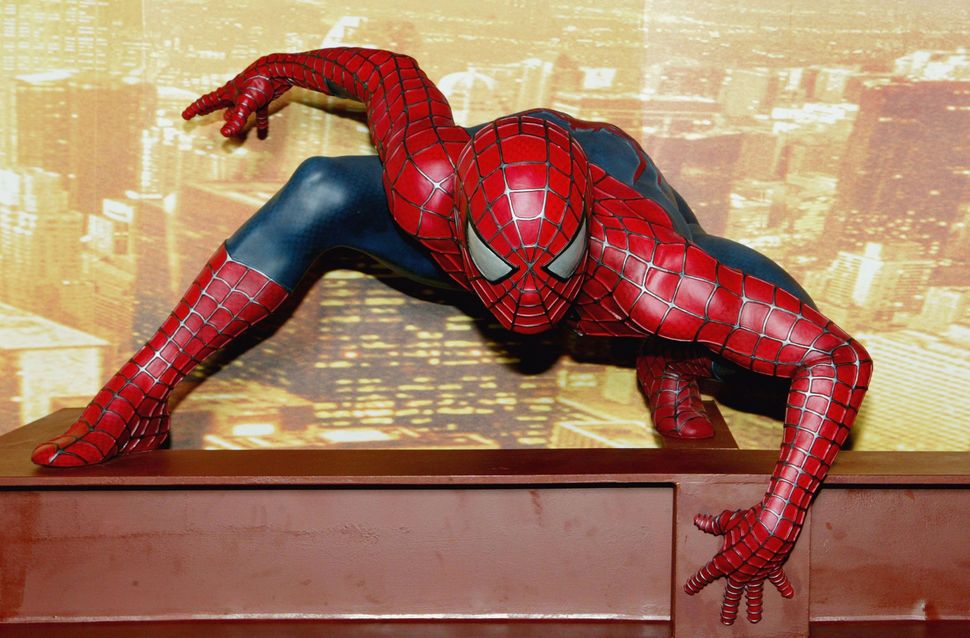 In the new film, “Spider-Man: Homecoming,” the answer is an emphatic “no.” Tom Holland, who plays Peter, is of Irish and English descent; in the film he and his Aunt May (Marisa Tomei) are Italian. Spider-Man isn’t Jewish canonically in the comics either; when his religious or ethnic background comes up, he’s generally represented as loosely mainline Protestant.

Spider-Man’s first appearance in comics, however, is more ambiguous about his Jewishness. Hints of anti-Semitism help define the character’s traumatic and frankly grim origin story. “Spider-Man: Homecoming” is a much cheerier vision of the possibilities of assimilation. But it gets to that multi-cultural vision in part by simply erasing Jewish content altogether.

Many early superhero comics creators in the 1940s were Jewish, and it’s easy to read iconic early characters as fantasies of Jewish assimilation. Jerry Siegel and Joe Shuster’s Clark Kent is a nebbishy Jewish stereotype who puts on circus tights to become an Aryan=American archetype of manliness. Joe Simon and Jack Kirby’s Steve Rogers is a nebbishy Jewish stereotype, unfit for combat, until he takes the super-soldier serum and becomes a fit, confident symbol of Americanness, decked out in red, white and blue.

Marvel creators were often Jewish as well, and again many of their heroes, like the (once again) nebbishy Bruce Banner, or the working-class ethnic Ben Grimm, can be read as Jewish stand-ins. By the 60s, though, the civil rights movement had raised questions for white creators about assimilation into American whiteness, and about American justice and tolerance in general. Scholar Martin Lund told me via email that, “the Civil Rights movement made some Jewish Americans leerier about whiteness, in a dual sense. On the one hand, there was a strong commitment among many Jewish Americans to the movement, at least up to a point, because it was just and because rights for one minority would also mean rights for another. On the other hand, too strong a commitment was problematic, because during the Cold War, activism of this kind was often claimed to be a communist front, which of course meant that the old anti-Semitic canards of “international Jewry” and “Judeo-Bolshevism” were never far from the surface.”

It makes sense, then, that the X-Men, created by Lee and Kirby, in their first issues practiced a kind of mutant respectability politics, trying to defuse they worked to overcome human fears by rigorously policing evil mutants on behalf of mainstream society. “The X-Men will stop you, Magneto!” X-Man leader Professor Xavier says in one early issue. “It will be mutant against mutant — to the death, if need be!! But mankind must be saved!”

Spider-Man too, in his 1962 origin story, decides on respectability and assimilation. But his journey there is much more painful. Created by Lee and Steve Ditko, the child of first generation Slovakian immigrants, Peter Parker is (one more time) a nebbishy, scrawny, bespectacled, brainy Jewish/immigrant stereotype.

Parker fits Jewish and immigrant stereotypes in one other way — he is loathed. His classmates despise him. The reason for this dislike is never articulated. It seems to come out of nowhere — unless you read Peter as Jewish, or as an immigrant outsider. Then suddenly, the classmates unmotivated animosity resolves into prejudice.

Peter, for his part, despises his classmates as well. When he gets bitten by the radioactive spider and develops super-powers, he doesn’t want to help humanity, or fight for mainstream society. Instead, he uses his abilities to make money as a wrestler. When he has the chance to stop a robber, he refuses, on the very reasonable grounds that he has no interest in enforcing law and order in a society that has treated him like crap.

It is only when the thief he failed to stop ends up killing his beloved Uncle Ben that Peter dedicates himself to crime fighting. Even after embracing mainstream respectability, though, he is still demonized by the press and generally seen by the public as an outsider: as in the famous Daily Bugle headline, “Spider-Man: Threat or Menace?” Again, the public antipathy to Spider-Man seems excessive and unmotivated — a miasma of prejudice which is mystifying in part because the comic is never willing to connect it to anti-Semitism or nativism. Spider-Man is not explicitly Jewish in the early comics, but he is hated as if he were Jewish. Certain kinds of people, for unspoken reasons, are never accepted as heroes.

“Spider-Man: Homecoming” takes that message and, with carefree enthusiasm, tosses it from the Washington Monument to dash apart on the ground below. The film does not retell Spider-Man’s origin, in part it seems because it would be too remorselessly downbeat. Instead, the plot centers on young Peter Parker’s efforts to prove himself to Robert Downey, Jr.’s Tony Stark. Peter is a nerd, and he gets some ill-natured ribbing from some of his peers, but the film is careful to show that this is not related to racial or ethnic prejudices.

On the contrary, Peter’s Queens high school, and his world in general, is comfortably integrated and post-racial. His best friend, Ned (Jacob Batalon) is Filipino-Amerian; his crush object, Liz (Laura Harrier), is black, as is his other sort-of-love interest Michelle (Zendaya.) One of the best set pieces of the film involves Peter trying to intimidate a low-level African-American bad guy. He totally fails to scare the villain. But the guy ends up helping him anyway because they both live in, have relatives in, and care about Queens. Black/white, good guy/bad guy—those things matter less than being neighbors.

That’s a lovely alternative to the usual superhero torture interrogation scene. The hopeful view of humanity — yes, even of villains — is part of the reason “Spider-Man: Homecoming” is so exhilarating and enjoyable. The original Spider-Man was suffused with a bleak belief that even a superhero couldn’t ultimately overcome prejudice; “Spider-Man:Homecoming” presents prejudice as already overcome before its hero does anything.

The prejudice that is overcome, though, oddly doesn’t include anti-Semitism. Stan Lee makes a brief cameo, but outside of that, the film’s multi-racial, multi-ethnic Queens doesn’t appear to contain any Jewish people. Italian ethnicity is visible and celebrated, but not Jewish heritage — or for that matter, Slovakian heritage.

The original Spider-Man comics were suffused with anxiety about assimilation. Peter swung back and forth between self-loathing and resentment of the culture and people that, for no reason, despised him. Peter’s Judaism, more than half denied, is discernible only because it was hated. That tension is gone in “Spider-Man: Homecoming.”

But is it gone because anti-Semitism is gone? Or is it gone because the film simply ignores or erases Peter’s links to Jewishness altogether? When Spider-Man was (half) Jewish, he was not loved. Now he is loved, but isn’t Jewish. Similarly, Gal Gadot, Scarlett Johansson, and Mark Ruffalo are all Jews who get to play supeheroes just so long as they’re on-screen characters are not identified as Jewish. The cineplexes are filled with heroes imagined by Jews. But it’s still hard, apparently, to imagine a Jewish hero.