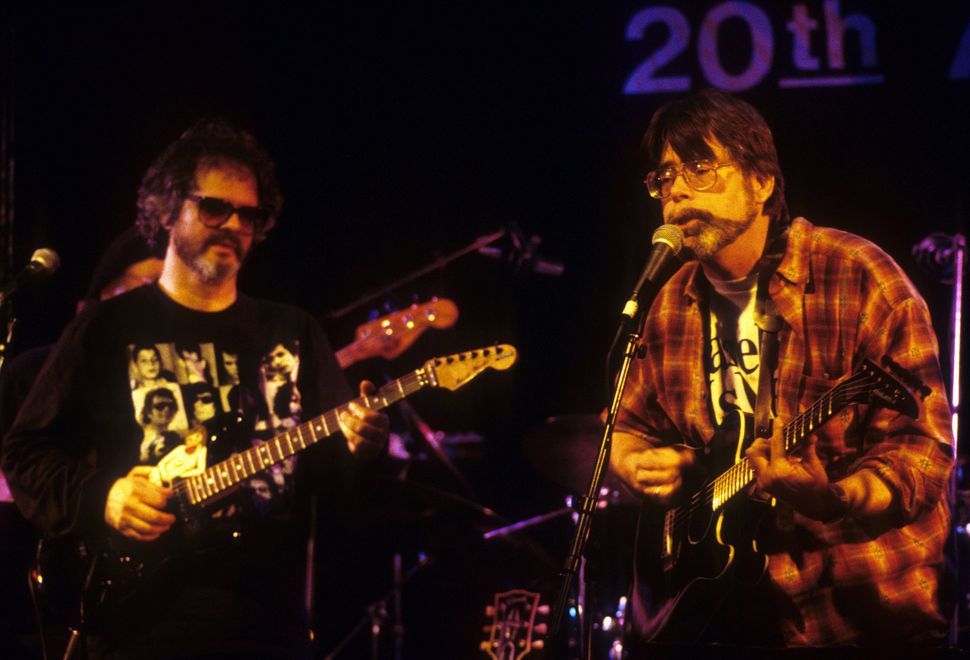 Author Stephen King was really born with that name. Not for him the path from Irwin Alan Kniberg to Alan King. He came out all ready, at least in name, to become one of the best-selling authors of all time, just as he was. Although when it came time for the prolific writer — as of last count, 54 novels and seven nonfiction books — to adopt a pseudonym, he did choose the suspiciously Jewish-sounding name Richard Bachman.

In reality, however, King wasn’t trying to pass. He took the name from his favorite band, Canadian rockers Bachman-Turner Overdrive, named after Randy Bachman, who grew up Mormon, albeit in a Jewish community in Winnipeg, in Manitoba, Canada.

King’s books have sold over 350 million copies and spawned an entire industry of adaptations as feature films, TV shows, comic books and miniseries — the latest of which is a 10-episode series based on King’s dystopian story “The Mist,” about a town shrouded in a fog of biblical, plaguelike proportions. It premiered on Spike TV on June 22. Other upcoming adaptations include the sci-fi fantasy Western “The Dark Tower,” which, co-produced by the longtime King associate and Oscar-winning screenwriter Akiva Goldsman (“A Beautiful Mind”), opens in theaters August 4. “It” opens on September 8. Think “scary clown” — unless that scares you too much. And later this year, King’s obsession with characters confined to bed (a la “Misery”) continues on Netflix with the film version of “Gerald’s Game,” the story of a woman who is left handcuffed in a remote cabin after her husband dies during one of their sex games.

King was raised Methodist and still identifies as such. Yet Jewish themes and characters pop up throughout his life and work. King gave his children the very Jewish names of Joseph and Naomi Rachel. (In fairness, he also has a son named Owen.) King’s second novel, “Salem’s Lot,” is placed in the fictional town of Jerusalem’s Lot, Maine.

King’s 1986 horror novel “It” includes a Jewish accountant named Stanley Uris — presumably a nod to real-life novelist Leon Uris of “Exodus” and “Mila 18” fame. King has always been a big fan and proponent of commercially successful authors like Uris and Pulitzer Prize winner Herman Wouk (“The Caine Mutiny,” “This Is My God”). King once wrote a short story, “Herman Wouk Is Still Alive,” as the result of a bet he lost with his son, author Joe Hill.

King wrote the liner notes for a tribute album to Jewish punk-rock group the Ramones and recorded a spoken-word intro to a version of Jewish hard-rock group Blue Oyster Cult’s single “Astronomy.” The Blue Oyster Cult song “(Don’t Fear) the Reaper” was also used in the original TV series based on King’s novel “The Stand.”

He has even toured as a musician with the Rock Bottom Remainders, a group of celebrity authors variously including Dave Barry, Amy Tan, Scott Turow, Mitch Albom and Cynthia Heimel (often with the help of pros, including Jewish musicians Al Kooper and Warren Zevon). In his 1994 essay, “The Neighborhood of the Beast,” King recounts stumbling upon restroom graffiti reading “Save Russian Jews, Collect Valuable Prizes.” In a subsequent short story, “All That You Love Will Be Carried Away,” published in The New Yorker in 2001, his main character, Alfie Zimmer, a traveling salesman, becomes obsessed with strange bathroom graffiti he encounters on his travels, believing it represents voices speaking to him. King recycled the “Save Russian Jews” graffiti in the story.

In his 2001 novel “Dreamcatcher,” the character of Joe “Beaver” Clarendon is “convinced that people named Rothschild and Goldfarb ran the world.” Presumably, King based Beaver on his real-life uncle Oren, about whom he writes in his nonfiction work, “On Writing,” Oren “drank quite a bit and had dark theories about how the Jews were running the world.”

One of King’s best-known works, “The Shining,” of course, was turned into a movie by Jewish film genius Stanley Kubrick. Some believe that Kubrick Judaized the story; in fact, there is an entire documentary film devoted to this premise, called “Room 237.” Renowned film critic J. Hoberman wrote, “Whether or not ‘The Shining’ is widely intelligible as a movie about the Holocaust, ‘Room 237’ makes it amply apparent that Kubrick was attempting to infuse King’s novel — which might otherwise be construed as a supernatural tale of domestic violence — with the full horror of history.” Kubrick’s musical choices for the film back up this theory, including Penderecki’s “The Awakening of Jacob.” Penderecki was a Pole who lived through the Holocaust and said that all his music was composed under the weight of its horror; “The Awakening of Jacob,” which plays in the film while blood rushes from the elevators, is also known as the “Auschwitz Oratorio.” King reportedly hates the film.