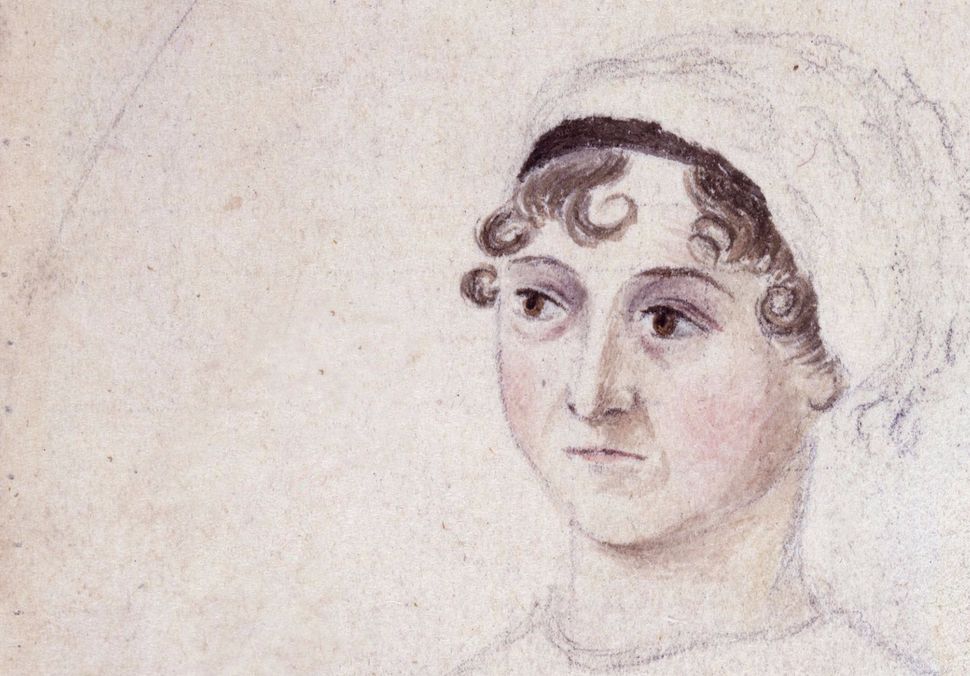 Jane Austen, the well-loved British novelist who died 200 years ago today, mentioned Jews in only one of her novels. (That would be “Northanger Abbey,” in which the heroine shuts down a suitor’s casual anti-Semitism in a sequence of giggle-inducing awkwardness; points for Austen.)

But the author has inspired Jews since her work first went into print. And her wisdom continues to resonate; as the Forward’s Editor-in-Chief Jane Eisner wrote this weekend, for instance, as the institution of Jewish marriage faces an uncertain future, Austen’s take on the importance of marriage is once again essential.

So as we celebrate Austen’s posthumous achievements, here are six of the most impressive, eccentric and hilarious ways she’s influenced Jewish culture.

A homebody no more: Austen, voiced by the actress Eden Riegel, is a narrator of two installations of the video game series “Saints Row.” Riegel also voiced Young Miriam in the Exodus epic “The Prince of Egypt;” lofty company for Austen, indeed.

“Pride and Prejudice,” Austen’s best-known novel, has inspired countless adaptations, including the Israeli miniseries “What a Bachelor Needs.” The 2009 show, which was set in the Galilee, starred Yael Hadar.

3) And a Cincinnati-set story of very modern love

Curtis Sittenfeld’s 2016 novel “Eligible” re-imagined “Pride and Prejudice” in the Cincinnati of the 21st century, complete with yoga and CrossFit. (A brief walk to Meryton is so 19th-century.)

4) She became the voice of turn-of-the-century teens

“Clueless,” Amy Heckerling’s “Emma”-inspired film about a spoiled Los Angeles teenager named Cher Horowitz, is an icon of 90’s humor, style, and satire. And with quips that still bite over 20 years after the movie’s release — “You’re a virgin who can’t drive” — we’re fairly confident it would make Austen proud.

5) And, with more dubious success, a Broadway star

Mid-century Broadway was a wacky place, and the musical “First Impressions,” an adaptation of “Pride and Prejudice” that bore the novel’s original working title, was no exception. With music and lyrics by George Weiss, “One Flew Over the Cuckoo’s Nest” screenwriter Bo Goldman, and Glenn Paxton, the show featured ornately-titled songs like “A Gentleman Never Falls Wildly in Love” and the surprisingly tame finale “Let’s Fetch the Carriage.”

6) Last but not least, she turned Harold Bloom’s head

Bloom, one of the most influential literary critics of the 20th and 21st centuries, named Austen to an exclusive list of 26 authors he considered absolutely canonical; in “The Western Canon” he deemed “Persuasion” “a perfect novel.” Doubt his recommendation? There’s only one good way to test it: Pick up the book, and let yourself be swept away.