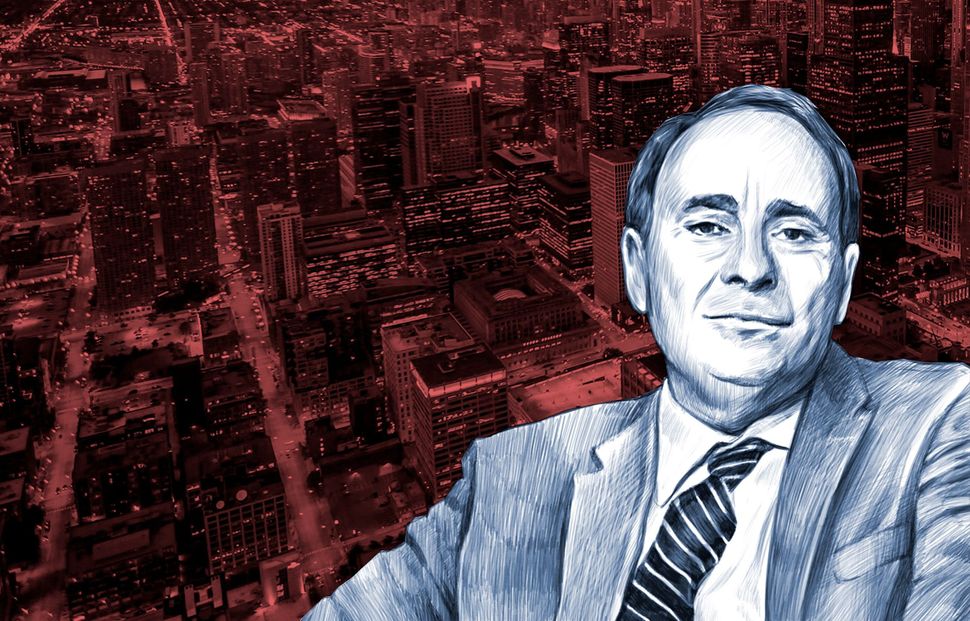 The University of Chicago’s Institute of Politics is a hive of activity. Students are testing out a theory in the lobby; another group is peppering a visiting fellow with questions, and upstairs, staffers are researching an upcoming guest.

Presiding over it all is the institute’s founder and director, David Axelrod, senior adviser to Barack Obama and longtime Democratic strategist, who has logged more than 100 local, state and national campaigns. But at IOP, which will mark its fifth anniversary this fall, Axelrod is on a different kind of mission.

“One of the reasons we started the IOP is to take some of the acidity and rancor out of politics,” he explained, “to model that we can disagree but still have a respectful debate.”

Some might find Axelrod to be an unlikely face for bipartisanship. A fierce competitor, he had no trouble trading blows with political opponents for the past four decades. But the 63-year-old is now laser-focused on encouraging young people to engage in public life, and on closing the bitter divide that has gripped — and exhausted — the nation.

Axelrod and his staff of 12 are hoping to accomplish those lofty goals by creating an open environment where students are exposed to a wide range of viewpoints — a rarity in these times, Republican senator Tom Cotton of Arkansas acknowledged.

“Too often today on our campuses, you can’t have this kind of debate,” Cotton told students at a recent IOP event. “Obviously, the majority opinion in this room doesn’t seem to be on my side, but you and I — even though we come from different sides of the aisle — can have a civil conversation in front of a civil audience and air some significant issues for our country without having people mauled or beaten or harassed.”

Balancing free speech on difficult topics that some might find offensive can be tricky to navigate, but it is essential to a democracy, said Axelrod, who still calls himself “an idealist.” The philosophy permeates the IOP and is reflected not just by invited speakers like Cotton, but also by the IOP’s board of advisers (which includes such stalwart conservatives as commentator William Kristol and former Republican National Committee chair Ed Gillespie). Most of all, this inclusiveness extends to “The Axe Files,” the popular podcast produced in Chicago and co-sponsored by CNN.

Guests have spanned a wide political spectrum, from Bernie Sanders and Chuck Schumer to Newt Gingrich and Karl Rove. But that doesn’t mean Axelrod reins in his own opinions. Topics outside of politics are also fair game — including his Jewish identity. 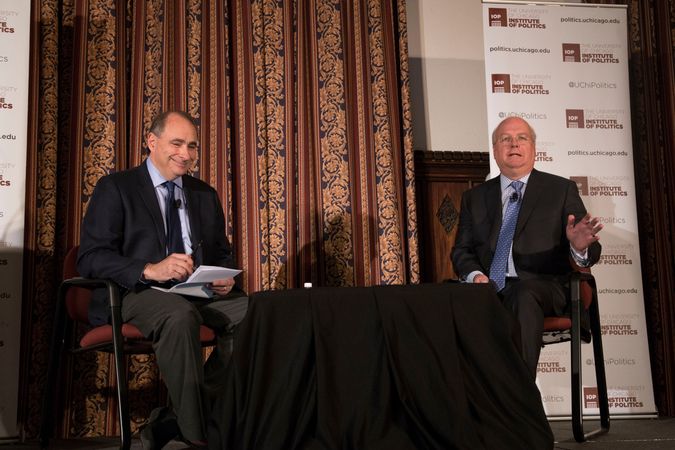 With Adam Schiff, for example, the host talked, as expected, about the Russia probe that has put the Los Angeles Democrat in the national spotlight. But he also discussed the immigrant story he and Schiff share, which, in just a few generations, moved, from the shtetl, to the highest echelons of power.

With Jon Stewart, Axelrod ventured into Donald Trump’s pointed use of the comedian’s surname (Leibowitz), while with the former U.S. ambassador to Israel Dan Shapiro he expressed his unflinching support for a two-state solution. 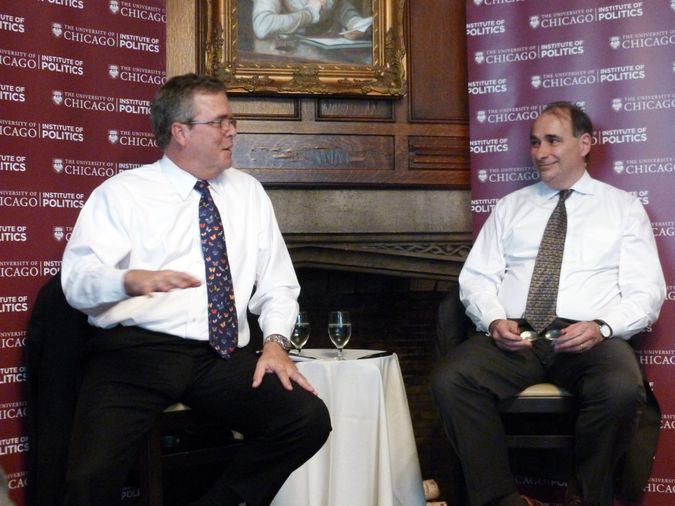 Jeb Bush with David Axelrod Image by Institute of Politics

It’s no secret that Benjamin Netanyahu and the Obama camp had a strained relationship. (The Israeli prime minister even called Axelrod and former chief of staff Rahm Emanuel “self-hating Jews”). The tensions certainly contributed to a rift with the Orthodox community, which overwhelmingly backed Trump in November.

“Those opposing voices do not speak for the vast majority of American Jews,” Axelrod said, quickly pointing out that the former president received 78% of the Jewish vote in 2008 and 70% in 2012, despite the Orthodox voting bloc. “Obama has been my friend for 25 years… I know what’s in his head and his heart. The truth is that the two-state solution is the pro-Israel position.”

Since February 2016, “The Axe Files” has been downloaded 16.3 million times, according to CNN. Over the past 200 episodes, Axelrod’s most popular guest has been Obama, who chose this forum to break his silence on the new administration. (The network would not disclose the least popular guest.)

In May, CNN launched a TV version of the podcast, which Ed O’Keefe, a senior vice president, called “an expansion of our relationship with David.”

Whether it’s the Saturday night graveyard slot or something else, the format “has not worked as well in front of the TV cameras,” O’Keefe acknowledged. In the transition from podcast to broadcast, “some of that intimacy has been lost and it can feel more like an event….” One of the reasons the podcast has been so successful is that “David is genuine, authentic, listening and connecting.”

Indeed, the hour-long interviews are usually revealing, no matter how overexposed the subject — a result, the host said, of “having a conversation, not an inquisition.”

To hear Chicago Cubs manager Joe Maddon explain why he launched an after-school program in Rust Belt Pennsylvania is to learn something about the man that goes beyond his trade. Like when we listen to Fox News’ Chris Wallace reflect on being overshadowed by his father. (“I was never going to be Mike Wallace, but that still left plenty of room to have a nice career.”)

During one episode, Rove, who is a Republican strategist, and Axelrod shared the stories of their respective parents’ suicide.

Axelrod was just 19 at the time of his father’s death, but his quiet recollection feels current: “At my dad’s funeral, so many of his patients told me, ‘He saved my life.’ But he couldn’t save his own.”

Axelrod’s progressive, tolerant view of the world is rooted in his politically liberal, conservative Jewish upbringing in Stuyvesant Town — a melting pot on New York City’s Lower East Side. His father, Joseph Axelrod, fled religious persecution in Ukraine, immigrated to America as a child and grew up to become a psychologist. Axelrod’s mother, Myril Axelrod Bennett, was an advertising executive. He says those influences shaped him into a life-long champion of the underdog and a fervent believer in government as an engine of upward mobility.

As a 5-year-old, he clambered atop a mailbox for a better view of John F. Kennedy in the final days of the 1960 presidential campaign. Eight years later, Axelrod devoted far more energy to distributing leaflets for New York senator Robert Kennedy than to preparing for his bar mitzvah at the Brotherhood Synagogue, on West 13th Street in Manhattan’s Greenwich Village. (The synagogue shared a sanctuary with a Presbyterian Church, an arrangement his maternal grandfather found so distasteful that he almost didn’t attend.)

Following his bar mitzvah, his Jewish exposure was mostly limited to basketball at the Emanuel YMHA, and later a trip to Israel, where he fell hard for a Sabra. He says he felt “a real attachment” to the country – but not to religious observance. “Like many of my peers, I pushed back from religion because it was so compulsory; something you had to do rather than something that could enrich your life.”

After graduating from Stuyvesant High School, Axelrod headed to the University of Chicago, where, once again, real-word politics took priority over academics. He snared a part-time gig writing for the neighborhood Hyde Park Herald, often scooping the big-city dailies. Even though his 1976 graduation was in doubt in the dwindling hours of the semester — he had neglected to take his swimming final — the Chicago Tribune offered him a full-time job. Eventually he became the youngest political editor in the newspaper’s history, at age 28.In Chicago he fell in love with the city’s rough-and-tumble politics — as well as with a fellow student, Susan Landau, whom he married in 1979. They had three children, including a daughter, Lauren, who was diagnosed with epilepsy as a toddler. The medications for her seizures, as many as 10 a day, ran $1,000 a month, a devastating expense on a newspaperman’s salary.

With the family teetering on bankruptcy, Axelrod left the Tribune to open his own political consulting firm. This is also why, years later, he fought so hard for health care reform. On the night that the Affordable Care Act finally passed, he went into his office, closed the door and sobbed, as he recounted in his 2015 memoir, “Believer: My Forty Years in Politics.”

While the consulting business provided the family with a more comfortable living, it also required long stretches on the road, leaving his wife to cope with crises. And with Lauren’s illness there were plenty. When he assumed the White House senior adviser role in 2008, his schedule allowed him to return home only one weekend a month.

“My heroic wife bore too much of the brunt of parenting, which is something I look back on with real regret and shame,” he said recently. “I have three terrific kids [he’s including his sons, Michael and Ethan] because she rose to the occasion in a way I did not.” 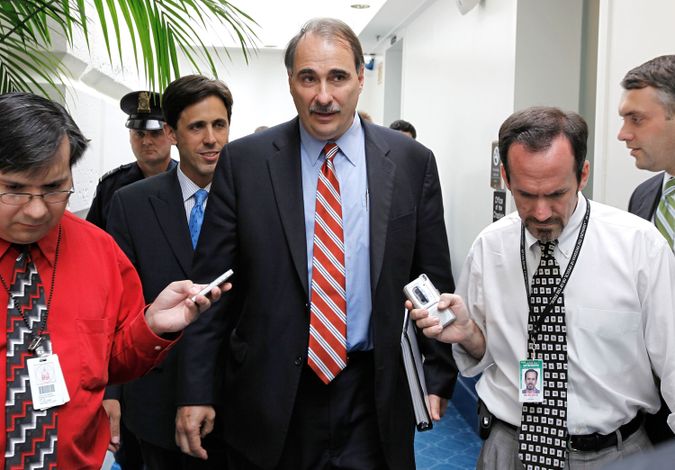 In His Previous Iteration: David Axelrod was senior adviser to Barack Obama. Image by Getty Images

After directing the 2012 re-election, he returned to the University of Chicago. His modest campus office is less prestigious than the one he occupied in the West Wing (a space now used by Jared Kushner), but it is adorned with career memorabilia — including a photo of the Obama loyalists playing touch football with their boss on the White House lawn.

Still, Axelrod says he does not miss the campaign trail. At an age when many of his peers are on the golf course, he has returned to his journalism roots and has parlayed a lifetime of connections to attract some of the biggest names in government and media to the university.

The connections that Axelrod has made throughout his life, so valuable for booking Washington insiders, have also been a boon to students, providing 225 paid internships with government agencies, think tanks and public policy organizations.

“David and his team have been incredibly generous with sharing their contacts,” said Meredith Daw, executive director of the university’s career center. “Thanks to their support, more students than ever are getting the skills and experience they need to thrive in a competitive job market.”

That he should play some small role in inspiring the next generation to get involved in what he still sees as “a noble pursuit” pleases him no end. “These kids… they’re thoughtful, they’re bright, they’re curious. They are skeptical, but not cynical, and they’re determined to achieve a better future. I leave here hopeful every day.”

Bonnie Rubin is a former reporter for the Chicago Tribune