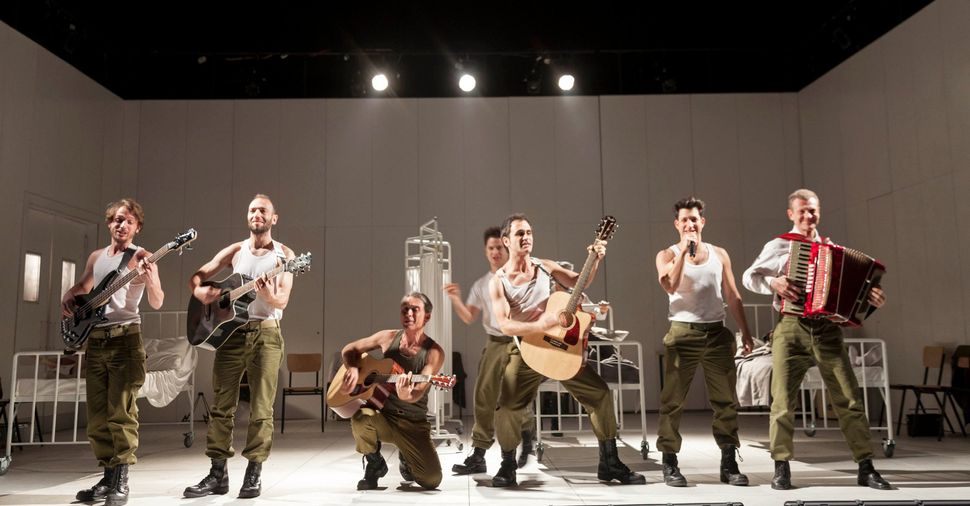 A chorus of actors in IDF fatigues raced to the bare white walls framing the stage. Minutes later, when they stepped away, those walls were covered in childlike drawings of a bucolic countryside: Hills, trees, birds, a stream.

It was the rare theatrical choice that evokes real wonder, but in “To the End of the Land,” an adaptation of David Grossman’s acclaimed novel about the intimate effects of Israel’s constant militarization, it was also heartbreaking.

It was easy to see the moment as a reflection of the way in which the modern state of Israel wasfirst conceived, with the barely-hoped-for wonder of scattered dreamers. Yet between the sketched-on walls, as the play’s action unfolded, appeared a microcosm of Israel as it is: Devoid of – and even ambivalent towards – a once-desired peace, struggling for internal cohesion, and demanding extraordinary physical, emotional, and ethical sacrifices from its citizens, Jewish and Arab alike.

The play’s title refers, nominally, to the northern Israel region of the Galilee. It’s there that the central characters, Ora, a middle-aged mother fearing for the life of her IDF-enlisted youngest son, and Avram, her long-estranged childhood friend, begin the lengthy hike that forms the play’s centerpiece.

But it also refers, of course, to a potential end to the land of Israel itself. Despite the surrounding natural beauty and the resurgence of love between them, Ora and Avram, over the course of their journey, illustrate the ways in which Israel dares its citizens to turn their backs on their country, and the points at which they do.

(For more thoughts on the play’s title, look to the Forward’s Editor-in-Chief Jane Eisner’s analysis of its deeply empathetic take on Jewish motherhood, here.)

Hanan Snir, who adapted “To the End of the Land” for the stage and directed the production, spent a year thinking about how to bring the book to the stage before trying his hand at a script.

“And then started the last war in Israel, in Gaza, and it brought to my mind the other war in Lebanon where David Grossman’s son was killed,” Snir said, speaking with the Forward over the phone.

Uri Grossman was killed during the Second Lebanon War, in 2006, while Grossman was writing “To the End of the Land.”

“All these memories of the previous war came back to me,” Snir continued. “And I started reading the book very, very quickly. I felt very emotional about it. And then I started writing it.”

“Israel is living on many, many layers of trauma,” he added.

The first in a series of upbeat musical interludes, for instance, seemed to reflect the youthful patriotism possessed by the protagonists when they first met as hospitalized teenagers during the Six Day War. In subsequent scenes, as the klezmer-influenced riffs began to accompany depictions of military service, they became alarmingly hectic. In the same way that the young Ora and Avram, feverish, spoke to each other with a blithe quickness that belied the seriousness of their illness, the music transformed into a symptom of trauma rather than a respite from it.

The play’s run at Lincoln Center Festival sold out, despite a much-publicized call for Lincoln Center to cancel it. Looking over the audience at intermission during the play’s second performance, Snir remarked on the fact that a single protester had yet to show up.

Before the show began, Grossman, speaking with his wife, Michal, and the American author Paul Auster, had also mentioned the dearth of in-person dissent; both he and Snir seemed half-humorously disgruntled by it.

“This play in itself is a protest,” he continued. “We protest against this situation of people in Israel living all the time under the threat of war after war after war, with no striving towards peace.”