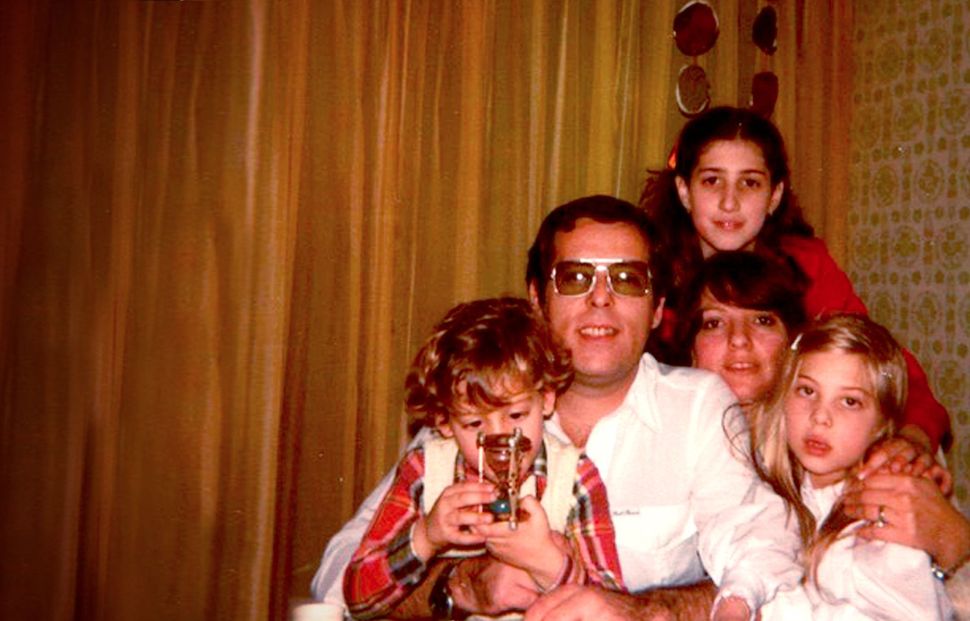 When I was in junior high school in Newton, Massachusetts, a middle class suburb of Boston with a large Jewish population, my friends could not believe that I, a blonde blue-eyed Jewish girl, had a brother named Fernando.

This was the 80’s, and Jewish kids in Newton had names like Alex, Jon, and David, with some Sams and Elijahs thrown in for good measure.

For the record, my brother is not adopted. He was born, and named in Argentina, where Jewish boys have names like Pablo, Jose, Federico, Mateo and Fernando.

My family is one of thousands of Jews from Latin America currently living in the United States. My parents brought us here for the same reasons many other immigrants parents find themselves on this side of the border, to give us a life with opportunities for success and freedom from political and economic instability.

Unlike my brother, my Americanness was never in question. I had a quintessential suburban Jewish life: I attended a Jewish overnight camp, swam at the local JCC, had my first slow dance in the social hall of Temple Emanuel and looked and acted like my friends and classmates. Most people never guessed I was not a born and bred American. And for many years, I kept my origins quiet.

I was not ashamed — but I simply did not want to be different. An immigrant child wants nothing more than to fit in. (That is, until I got to college and being “just American” was no longer held in such high regard.) My secret usually came out only when my friends met my parents, or called my house. And then it became a conversation topic: “There are Jews in Argentina? How did they get there?” The same way they got here, I answered —- on ships escaping the pogroms and rising anti-Semitism in Europe. Or, “How can you be blonde and be from Latin America?” The same way you can be blonde and be born in the United States, I would say. Or my favorite — and this one came up surprisingly often —- “Does the toilet flush clockwise or counterclockwise in the southern hemisphere?” I still don’t know the answer to the last one, as I always forget to look whenever I travel to South America.

In a town full of Jews, our identity was a contradiction.

As Latinos we were exotic, yet as Jews we were part of mainstream. We were the safe Latinos: Jewish and white. We threw good parties, because “You Latinos really know how to party”. We held barbecues and hosted World Cup soccer viewings.

And after some years in Newton, we “Jews with a Latin twist” sought each other out, or at least my parents did. Once, when my parents were picking me up from a ski trip in the JCC parking lot, they overheard a set of parents chatting in Venezuelan Spanish. The couples made plans to go see a movie a week later and our families have been celebrating Passover in Spanish together ever since.

Over the years and with increased immigration, we ceased to be an oddity, at least in Newton, where there are Jews from Mexico, Chile, Colombia, Argentina, and Venezuela. Since the 1980’s, Massachusetts has experienced a sustained uptick in immigration, and Jewish Latinos are part of this trend. Today, suburban Boston even counts a Chilean rabbi and an Argentine cantor among its Jewish clergy.

Eventually I left Newton and went out into the big wide world of ethnicities and race and religious groupings, where I once again did not fit in so seamlessly. I moved to New York City in the mid 1990’s and rented an apartment on Avenue C and 7th Street on Manhattan’s Lower East Side. The neighborhood had once been ground zero for Eastern European Jewish immigrants, but by the 1990’s, synagogues had become Pentecostal churches and the Lower East Side had been renamed Loisaida by the Puerto Rican majority who then resided there.

It was here that I learned to use my Spanish to become part of a different community, to become a Latina. My Costa Rican Jewish roommate and I were the “hueritas” (i.e. white girls) who spoke Spanish. At first we attracted a lot of comments such as, “Mamacita, how does a blanquita like you speak Spanish so well?” But we quickly learned that shared language is more than a verbal code of communication, it is a set of symbols that allude to a common origin and shared experiences. Sure, as white women and new inhabitants, we were outsiders in the neighborhood, but through daily interactions in Spanish with neighbors and shopkeepers, we managed to bridge part of that divide.

My Jewish background never came up and I never brought it up. Even my whiteness seemed to fade into the background as our imagined common experiences were highlighted. Race and skin color can be optical illusions. We see what our minds tell us to see, and the Latino residents of the Lower East Side eventually saw me as a Latina, and not as a white Jewish woman from Massachusetts. We read race and ethnicity not just through skin color, but also through language, dress, behavioral patterns and location.

I became much more aware of the vagueness of racial and ethnic grouping years later as a graduate student in sociology. I worked as a researcher at the Center for Latin America, Latino and Caribbean Studies. Among my colleagues were Puerto Ricans, Colombians, Mexicans and Brazilians. Our office was decidedly Latino, and my colleagues never questioned my in-group status. I was Latina, just like them. So, imagine my surprise (and my dismay) when our new brochure was printed and on the cover was a staged photograph of my colleagues, without me. “We did not include you because you are too blanquita,” they told me “You don’t look Latina enough.”

The US census defines Latinos as anyone with origins in Latin America. A person can be white, black, Asian, Native American and Latino.

It seems so straightforward written this way, but my experience has shown that it is anything but. Race and ethnicity are contextual and based on much more than skin color and ancestry. But racial and ethnic assignation (i.e. the ethnic and racial category other place you in) depends very much on people and places. For my Latino colleagues, I was undoubtedly one of them, but my fair skin made this invisible to the world beyond the center that the brochure was designed for.

I am not naïve about the privilege that my light skin and blonde hair affords me. I can switch between groups and, for the most part, decide when and where to highlight my Latina or Jewish identity or both. This is a privilege not granted to members of racial groups whose phenotypes do not resemble that of the white majority. Yet the contextual nature of my ethnic identity shows just how nebulous these borders can be, and how much racial and ethnic identity depend on an assumed set of behaviors. The diversity within ethnic and racial groups is obscured by the stark ethnic and racial categories of the current American classification system — a system that has not kept up with the changing diversity of the American population.