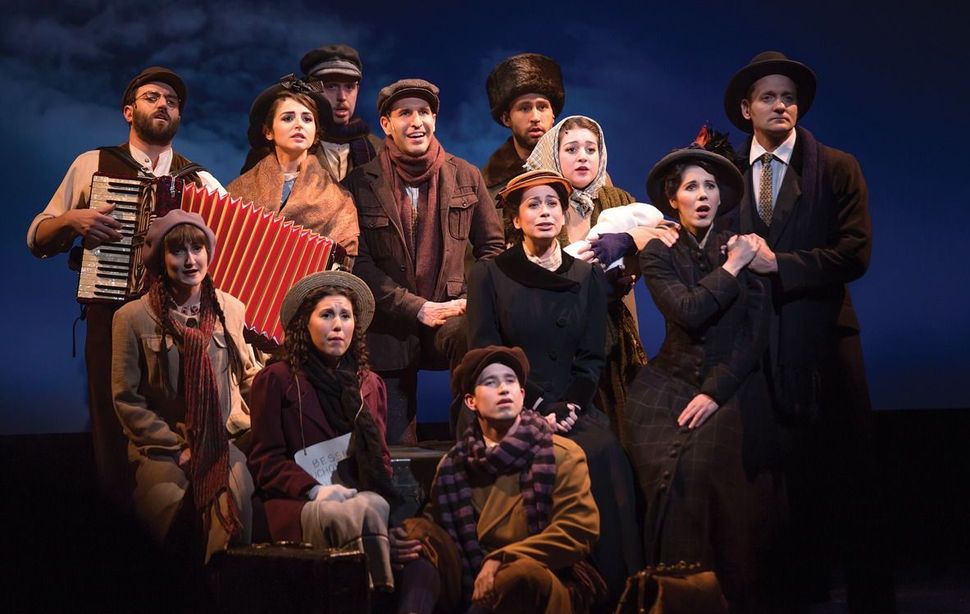 The goal then was to depict, through Yiddish song, the first decades of Eastern European Jewish immigration in America. The play opened with “Mir forn” (We’re Taking Off) as they left their home countries by boat, and ended with “Am Yisroel Khay” (The Jewish People Lives On) marking Jewish continuity after the Holocaust. And of course, it included Emma Lazarus’ well-known call to open the gates of America to free immigration: “Give me your tired, your poor…”

The play was created based on songs and documents found in the Forverts archive which the late archivist and Forverts columnist Chana Mlotek had collected and researched.

In “Amerike”, Allen and Marcus display their effortless skill at comedy; Allen as a sweatshop owner and army recruiter, and Marcus – as the greenhorn [new immigrant] Fannie, who works her way up the social ladder until she can afford to move out of the narrowness of Lower East Side to the luxurious Bronx. Also funny are the Yiddish radio sketches reminiscent of Woody Allen’s “Radio Days”.

Stephanie Lynne Mason and Alexandra Frohlinger deserve mention, as does David Perlman, who portrays the classic Jewish schlemiel to perfection. As the old Yiddish joke goes, he becomes confused on his arrival in Ellis Island, forgets his new American name and after mumbling “shoyn fargesn” [I forgot already] his name gets recorded as Shawn Ferguson. He spends his days peddling on the streets of New York, harboring big dreams of – what else? – becoming a capitalist.

Another interesting casting choice is Daniel Kahn. A popular klezmer musician who sings about the importance of labor unions (I confess that I missed his dramatic performance as Biff in “Death of Salesman” in Yiddish a year or two ago), here he forcefully performs several numbers expressing his dedication to socialism and fighting for justice; or poignantly playing a father newly arrived at Ellis Island pleading for his children not be deported back to Europe.

As the only cast member who is fluent in Yiddish and thanks to his deep dramatic voice, Kahn gives a moving performance, seamlessly making the transition from Yiddish rock star to portly operetta-singer on the Yiddish stage. He also excels in the comic Yiddish radio scenes, belting out “Romania Romania”, and performing a vaudeville act.

As Mlotek and the actors clearly stated, it was no coincidence that they decided to revisit the play this year. They explained to the audience that the anti-immigration sentiment expressed by Donald Trump and his colleagues forced them to speak up. The play ends with Lazarus’ words repeated in many languages, proving that this isn’t just a Jewish story.

The play was also staged as part of the Immigration Arts Summit, an event organized by the Folksbiene in which theater groups from different ethnic backgrounds, including Turkish and Irish groups, gathered at the Museum of Jewish Heritage, not far from Ellis Island, to stress the summit’s unmistakable political message.

“Amerike: The Golden Land” is playing at the Museum of Jewish Heritage, in downtown Manhattan until August 20th.