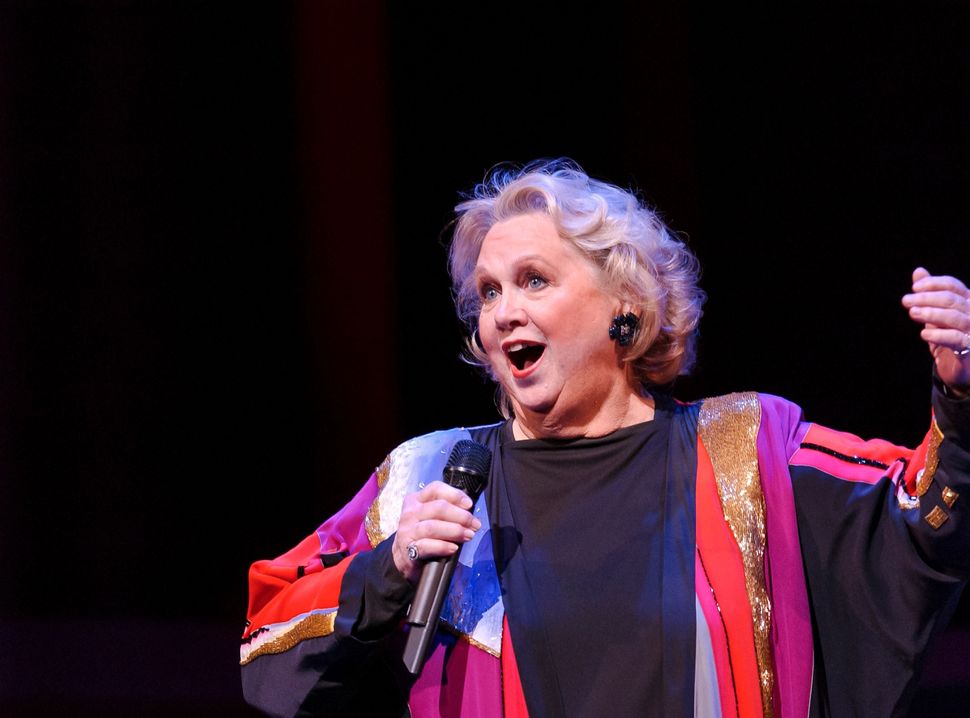 Barbara Cook, the Broadway diva who died on August 8 at age 89, is best remembered for starring in the musicals “Plain and Fancy” (1955), “Candide,” (1956) and “The Music Man” (1957). The long years of cabaret singing that followed may have obscured how much Yiddishkeit was involved in the achievement of this doughty performer. In part to escape a gorgon of a stage mother, in 1952 she married the Jewish actor and Borscht Belt comedian David LeGrant (1923-2011). They had met when performing at Camp Tamiment, the Catskills resort for Jewish singles where Sid Caesar, Danny Kaye, Jerome Robbins and Herbert Ross got their start. LeGrant, who later developed a solid career as an acting coach, performed with Cook in a touring production of Rodgers and Hammerstein’s “Oklahoma.” He played the peddler Ali Hakim, called Persian but obviously meant to be Jewish, a role first performed by the Yiddish theater veteran Joseph Buloff. She played the role of Ado Annie.

As Cook recounts her in her plain-spoken memoir, published last year, her mother sent a scorching note to her fiancé’s mother: “Your lousy stinking Jew […] son wants to marry my gorgeous daughter.” Nevertheless the wedding took place, and during performances in New York in 2008 at the Café Carlyle, Cook explained that at the ceremony a rabbi co-officiated, giving her the Hebrew name “Bracha,” or blessing. The marriage lasted until 1966, although it could be stormy. During a 1982 interview with Dick Cavett, Cook ruefully admitted that she once hemorrhaged a vocal cord while screaming at her husband. Their son, Adam LeGrant, born in 1959, grew up to be an acting teacher and performer, like his father, in such roles as Pincus in William M. Hoffman’s “Riga,” a play about repercussions of the Holocaust in Latvia.

Meanwhile, Cook’s career marched on. She had made her Broadway debut in the political satire “Flahooley” (1951) with songs by Sammy Fain and E. Y. “Yip” Harburg (born Isidore Hochberg), followed by a revival of Rodgers and Hammerstein’s “Carousel.” “Plain and Fancy,” (1955) was a view of an Amish community by a team of Jewish musical comedy writers. The book was by Joseph Stein, who later wrote the book for “Fiddler on the Roof” and Will Glickman, with songs by Arnold Horwitt and Albert Hague (born Albert Marcuse). Then she was called to audition for the role of Cunegonde in Leonard Bernstein’s “Candide” (1956). Asked to perform a classical aria to show her vocal range, Cook ventured the entrance aria from Puccini’s “Madama Butterfly,” leading Bernstein, accompanying at the piano, to comment that she had “great musical courage.” She would need it to perform “Candide” eight times a week, with a murderous number of high notes required in the original production. At one point, as Cook confided to the American Jewish playwright William M. Hoffman, she counted that Bernstein’s score contained four E flats over high C, six D flats, 21 high C’s, and sixteen B flats. A particularly painful display aria in “Candide,” depicting a coloratura soprano having a nervous breakdown, placed brutal stress on the voice of a kind that most trained operatic sopranos — who usually sing once a week — would have refused. Cook accepted and survived. In 1958, her first solo recording would be offbeat chamber settings of poems by Dorothy Parker by Seymour Barab, an American composer of Polish Jewish origin.

Among her subsequent high points were “She Loves Me,” (1963) a musical adaptation of the Ernst Lubitsch film “The Shop Around the Corner.” Its book was by Joe Masteroff, lyrics by Sheldon Harnick and music by Jerry Bock, the latter two the creators of “Fiddler.” After a non-singing role in Jules Feiffer’s dark comedy “Little Murders” alongside Elliott Gould and David Steinberg, a flop in its original Broadway staging, Cook triumphed when cast against type in yet another musical touring production. In 1967, belying her all-American blonde looks, she was by all accounts a splendidly convincing Fanny Brice in “Funny Girl.” In later years, vaudeville-style mugging also became part of her renditions of some songs, especially those from Gershwin’s “Porgy and Bess.”

Someone of immense tensions, anguish, and varieties of mood, Cook was able to keep her performing range almost limitlessly extended, winning the admiration of musical collaborators from Marvin Hamlisch to Michael Feinstein. Her musical standards remained ever-high, and she cherished idols of popular song from Mabel Mercer to Mel Tormé, the latter born of Russian Jewish ancestry. Perhaps her inner emotional complexity brought the convoluted, sentimental, and bitter stage music of Stephen Sondheim closest to her heart. Cook frankly admitted to boredom at endlessly repeating one-dimensional, straightforward tunes from “The Music Man” such as “Till There was You.” Instead, she relished the self-debasing role of Sally Durant Plummer in Sondheim’s “Follies,” the unflattering portrait of an ex-showgirl. Songs such as “In Buddy’s Eyes,” referring ruthlessly to former physical beauty, and “Losing My Mind,” about derangement caused by love, were never more insightfully performed than by Cook. Although she favoured stately tempos in later years and swept around onstage like an operatic star, uncannily her voice, with the highest notes renounced, retained its youthful freshness. Audiences at her Carnegie Hall comeback in 1975 and for decades thereafter continued to marvel at this phenomenon. The lyrics of “In Buddy’s Eyes” appeared to allude to this startling fountain of musical youth: “In Buddy’s eyes/ I’m young, I’m beautiful./ In Buddy’s eyes/ I don’t get older.”

Until her final illnesses, she retained this vivacity and was known for generosity to audiences. On a brisk April day in 2010, emerging from a stage door after a Sondheim performance, she lacked the time to sign autographs for waiting fans, so she sang an impromptu song especially for them. Few octogenarian performers would have been as accommodating. Cook also maintained a sense of humor about her ups and downs, aware that her trajectory only sometimes set a model to be emulated by younger talents. In 2005, accepting an award from the National Alliance for Research on Schizophrenia and Depression, for speaking out about her own years of depression, she wisecracked: “Well, I’m just sorry my former husband isn’t here to see me get the mental health award. Thank you!”