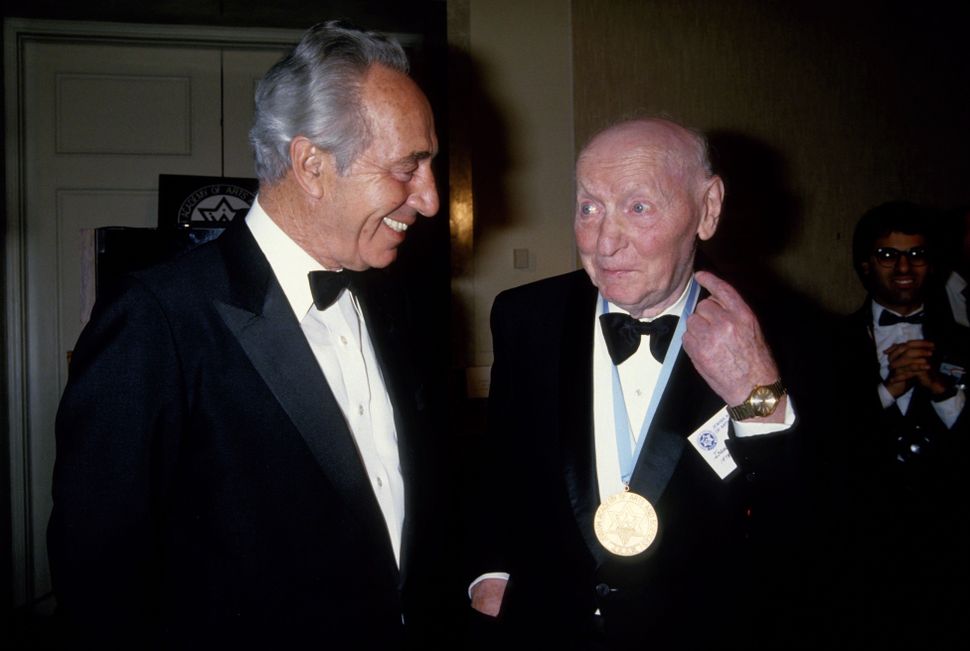 This Month Anne Reads:
”The Fools of Chelm and Their History,” by Isaac Bashevis Singer.

Isaac Bashevis Singer was born in 1902 in Leonim, Poland and died in Florida in 1991. In 1978 he won the Nobel Prize for literature bringing joy to Jews everywhere. This came as a vindication of our gifts to the world, an indirect apology from the Christians who thought our head size limited our brains. It also made Bernard Malamud jealous and maybe a thousand other Jewish writers as well.

These Chelm folk tales, by no means Singers most significant literary work, had floated around the Jewish world long before Singer made them his own. But Singer made them famous and Singer, the mischievous, foxy grandpa, of Yiddish literature bent them to his own purposes. Chelm is an imaginary small town in the Pale and its inhabitants are completely without wit or education or even basic survival skills and in their bumbling ways, both poor and stupid. The stories from Chelm mock all Jews who thought they could swallow the enlightenment as easily as a bite of bagel with cream cheese.

Singer tells us of the origin of Chelm: “In the beginning a river formed in Chelm. It contained many fish and these were the ancestors of the Chelmites. This may be the reason why the Chelmites love fish, especially gefilte fish.” This stew of Darwin and fairy tale is bittersweet and often irresistibly charming.

In Chelm the leader Gronan Ox declares war on a neighboring village of Gorshkov because he sees war as a way out of the poverty that plagues the town. The news ”spread throughout Chelm that a war against Gorshkov was coming and that the plan was a “highly guarded secret.” Of course the Chelmites have colds and sniffles the night of the invasion. Of course they lose their way and invade the town of Mazelborscht instead and in that town a wedding party of butchers and coachmen is celebrating and in no time they beat up the ragged army from Chelm and chase them away. On return to Chelm Gronan Ox’s wife Yente Pesha is so startled by his bruised appearance that she empties the slops on his feet. She is bossy, unfeeling, nasty. Yente is a Borscht belt joke in a Pale that had no Borscht belt.

The Chelmites try to deal with the poverty that makes life so hard for most of their citizens. They think of a set of solutions that echo the ideas of socialists and communists and idealists of all kind but quickly they see that nothing will work, not abolishing money, not giving out money to all, not ordering this or that behavior. The nature of the human congregation is not to share and cruelty, while not exclusive to any particular political party, seems to rule everywhere, certainly in Chelm.

In reality in the shtetl towns the women worked hard and supported whole battalions of scholars. They sewed and cooked and sold wares in the market place. Odd things went on between men and women caught in poverty, in small towns. The shtetl dwellers were dealing with the constant threat of illness as well as the fear of their not so friendly neighbors.

We might not want to be too sentimental about the shtetl: Chagall cows leaping over the moon and fiddlers on the roof and all.

We can see in Singer’s Chelm stories the outlines of endless Jackie Mason jokes, of the weird tension between Jewish sons and their loving or too loving mothers and their less valued sisters and the strains that plagued us even in America.

In Singer’s tale Yente humiliates her husband as she forces him to wash the dishes. “Don’t lose time. Take off your crown, put on an apron, and get busy.

I suppose for Singer this was meant to be funny. But reading this I remembered all the horrid Jewish Princess jokes that rained down on us and the Jewish mother jokes that made it seem as if Jewish mothers cannibalized their sons even as they were saving money to send them to medical school.

I know it’s only a joke. But jokes have cultural bites and the “take my wife, please take her” joke is not so funny if you know that it is based on something very wrong in the power structure between men and women and reflects not love but hate which is only funny if you don’t think too hard about the derision it spreads and the pain it illuminates.

The Chelmites did some sweet things in their ignorant confusions. In another Singer Chelm story, elders of Chelm trap the reflection of the moon in a bathtub so they might use its light to cut the darkness of cloudy nights. Perhaps this was an early stab at solar power.

These Chelm stories are now published for children but I think that is a mistake. Children would never understand this satire of political passions. The socialists, the capitalists, the dreamers and the schemers of all communities are made fun of here as they try to address and fix the issues of poverty that remain intractable, elusive of solution and plague us even today outside of Chelm or are we still always in Chelm?

Singer does strike at the heart of the political flaws in every system of rule we have endured. Unfortunately he offers no solution to our greed and inequities. Of course that is not the author’s responsibility. On the other hand there is nothing funny about our communal failure to take care of each other. Jews do I think rather better than most in supporting our people, but it is never enough, not until the Messiah comes.

It needs explanation however, why these tales appealed so strongly to the Jews who had left the ghettos, who themselves knew the stories of Abraham Lincoln and Thomas Jefferson, and Thomas Edison, etc. Perhaps they laughed at these tales to claim their secular place in modern America.

Irving Howe wrote about these Chelm stories. He thought that they rose from tensions within the enlightenment world of the late 19th century and early 20th. He thought that Jews were eager to make fun of uneducated Jews and distance themselves from scientific ignorance. That ignorance had been enforced by hostile rulers, hostile people who prevented Jews from ownership, from gymnasiums, from universities, from living wherever opportunity might take them.

My mother, born in America in 1910, to a mother from a small Jewish town in Poland, told me that sex before marriage would cause my children to be born with cleft palates. She told me that illness came from dirty toilet seats. Also it was unlucky to pass a nun on the street. Nuns, she said, were disappointed women and you had to spit to avoid catching their disappointment. When I had my first child my mother said to a passing friend who had complimented the baby, “No, no, she’s ugly.” Lilith, she explained to me, might get jealous and harm the child. So the world of Chelm was with us in our New York City home and it seems believable, thank you Irving Howe, that Jews who became a part of secular culture might want to make fun of those Jews who were slower in joining the universe of Voltaire and Newton and Darwin.

Jews, of course as a cohort are not stupid and we pride ourselves on our economic smarts, our school smarts, our scientists and writers and all the contributions we have made to the movies and the theater and the newspaper world etc. Is there some effort to disguise our success in these stories? “Oh no, Jews are just like everyone else: forget about our admissions to college or our rise in the stock market, we are just poor folk like those living in Chelm.” In truth we are rather proud of our brains that have led us to prosper through many difficult centuries. When we laugh at the Chelmites maybe we laugh because we are so clever we can pretend to be stupid. It might deflect some anger at us.

I heard Isaac Bashevis Singer speak to a large audience at New York University years ago. He was an old pixie, congenial and charming. He referred to God as the great Novelist in the sky. Of course no novelist would allow his characters, so many of them, to suffer as Jews had recently suffered in the camps of Eastern Europe. Who would believe that story? Novelists write fiction. If only God were a fiction writer!