How The Holocaust Shaped The Career Of The Late, Great Dick Gregory 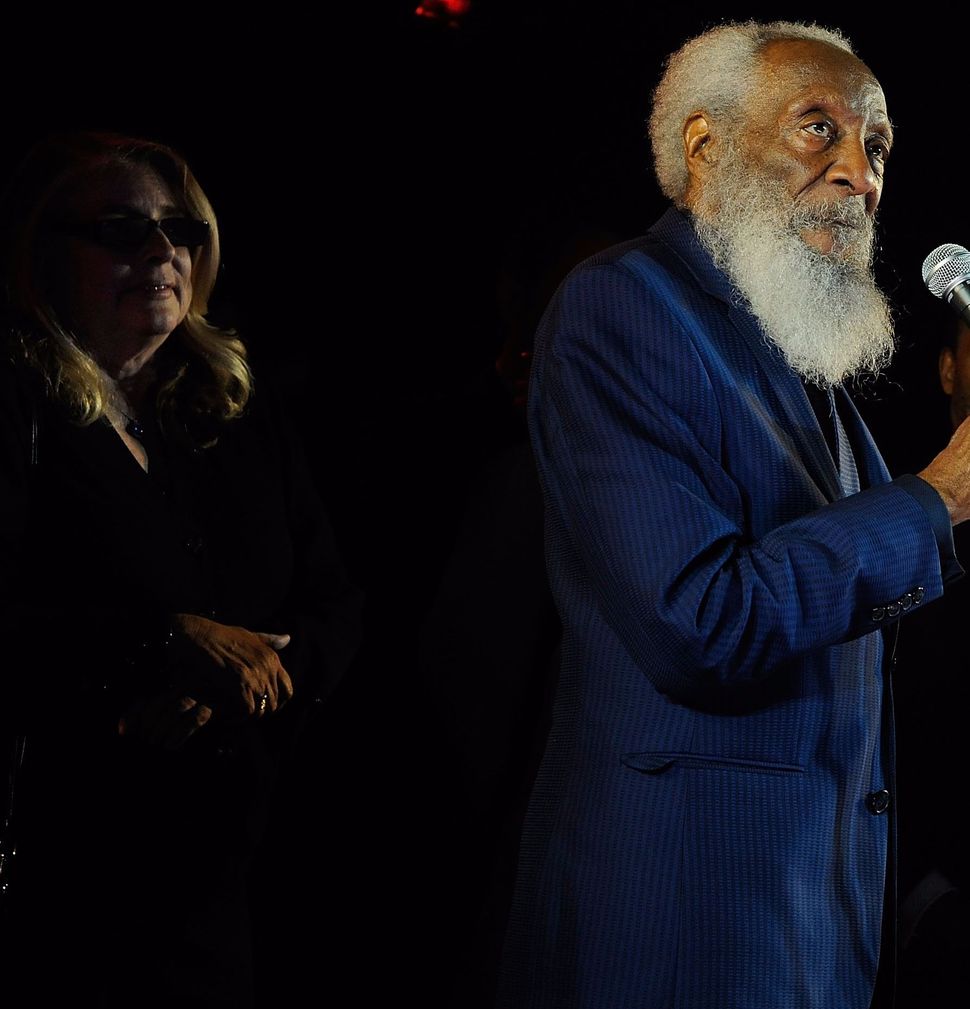 Dick Gregory, the activist and comedian who died on August 19 at age 84, used tragedies of modern Jewish history to illuminate the civil rights struggles of African-Americans.

As described in his memoir, out next month from Amistad Books, Gregory marched and was jailed alongside Dr. Martin Luther King Jr. and Medgar Evers.

From his early days growing up in St. Louis, interaction with Jewish neighbors was part of Gregory’s education. In his 1964 autobiography, he recalled a Jewish grocer in his run-down neighborhood, where the fruit and butter on sale was sometimes rancid. Young Gregory even indulged in shoplifting. However, he acknowledged:

“When it came down to the nitty-gritty you could always go to Mister Ben. Before a Jewish holiday he’d take all the food that was going to spoil while the store was shut and bring it over to our house. Before Christmas he’d send over some meat even though he knew it was going on the tablet and he might never see his money. When the push came to the shove and every hungry belly in the house was beginning to eat on itself, Momma could go to Mister Ben and always get enough for some dinner.”

Granting the ultimate generosity of the Jewish shopkeeper, Gregory’s description has been cited by sociologists such as Jennifer Lee in “Civility in the City: Blacks, Jews, and Koreans in Urban America” as proof that relationships between Jewish vendors and African-American customers in slum areas of America were nuanced.

As a young stand-up comedian, Gregory was quick to recognize the path-breaking precedent of Lenny Bruce, born Leonard Schneider, and Mort Sahl. Joseph Dorinson’s “Kvetching and Shpritzing: Jewish Humor in American Popular Culture” terms Gregory “one of the cultural heirs” of Bruce and Sahl.

The critic Gene Santoro has noted that Gregory referred to Lenny Bruce as the “eighth wonder of the world,” and was inspired by a Bruce routine about the n-word to adopt that term as the title of one of his early books. The cultural historian Will Kaufman has pointed out that when attending a performance by Bruce, Gregory told a friend: “You have to go back to Mark Twain to find anything like [Bruce], and if they don’t kill him or throw him in jail, he’s liable to shake up this whole… country.”

Gregory found more kindred spirits in other American Jewish comedians of Bruce’s generation. Allan Sherman’s biographer Mark Cohen argues that Sherman’s defence of Jewish culture provided Gregory with a blueprint for his own defence of African-American civil rights and culture.

Yet at the National Conference for the New Politics in 1967, where a Black Caucus declared itself opposed to the state of Israel, Gregory told The New York Times “Every Jew in America over 30 years old knows another Jew that hates Negroes…and if we hate Jews, that’s just even, baby.” This sentence ostensibly justified mutual odium, although Gregory clearly did not hate Jews as a group.

Reaching adolescence as the truth of the Nazi’s concentration camps was revealed to a horrified world, Gregory was permanently impacted by the extreme example of where racism could lead. Forty years after the end of World War II, he travelled to Munich with a group of Jewish organizations to protest President Ronald Reagan’s decision to pay homage to a German military cemetery in Bitburg, where members of the Waffen-SS — a military arm of the Third Reich’s SS (Schutzstaffel) — were buried.

In 1963, during a much-remembered speech at St. John’s Baptist Church in Birmingham, Alabama, Gregory underlined how the horrors of Nazism and the fate of Europe’s Jews were ever-present in the minds of African-Americans fighting for their rights. He told his audience that he had seen a newspaper report of Russians claiming that they had disinterred the head of Adolf Hitler.

He added: “Well I want to tell you that’s not true. You want to find Hitler’s head, just look right up above Bull Connor’s shoulders,” referring to the Commissioner of Public Safety for the city of Birmingham, who had turned fire hoses and police attack dogs against protestors, including children.

Gregory’s eventual abandonment of a thriving stand-up comedy career was also due, he claimed, to what he had learned from the tragedy of the Holocaust. By the 1970s, as activism began to outweigh comedy in his professional calendar, he commented, “They didn’t laugh Hitler out of existence.”

Hitler and the Second World War popped up in interviews as references for Gregory for the rest of his life. In 2005, when discussing the euphemism “n-word,” he asked: “Can you imagine the Germans, when they got so upset with Hitler and what the Nazis did to the Jews, they changed the word swastika to the s-word and concentration camp to the c-word?” Two years ago, in an interview with Salon, Gregory was still conceptualizing civil rights, using Nazism as a reference:

“We think Hitler was one of the most powerful tyrants — them Nazis one of the most powerful governments that ever existed — but you can’t go to Germany and see a swastika. Not in public. So what does that say about us here? We’re more vicious. These white American racists were more vicious than Hitler and them Nazis they hung on years after the war was over. You know how long World War II’s been over? And yet to this day they’ve got Nazi sympathizers but it’s not permitted in public. But we Americans don’t demand that of our racists. Black Americans don’t demand it.”

In 2000, when accused of being an absentee father by The Boston Globe, Gregory referred to a World War II precedent: “People ask me about being a father and not being there…. Hitler had a father. Don’t talk to me about family.” Last year, Gregory responded to the results of the presidential election by telling interviewer Roland Martin “Any time you vote for the lesser of two evils you’re evil yourself – that’s how Hitler came to power.”

Gregory’s longstanding obsessions with conspiracy theories and alternative diets might make some doubt his utterances. Still, his legacy of political and historical understanding, in part due to his friendships and alliances with Jews, might convince us to pay closer attention.

How The Holocaust Shaped The Career Of The Late, Great Dick Gregory