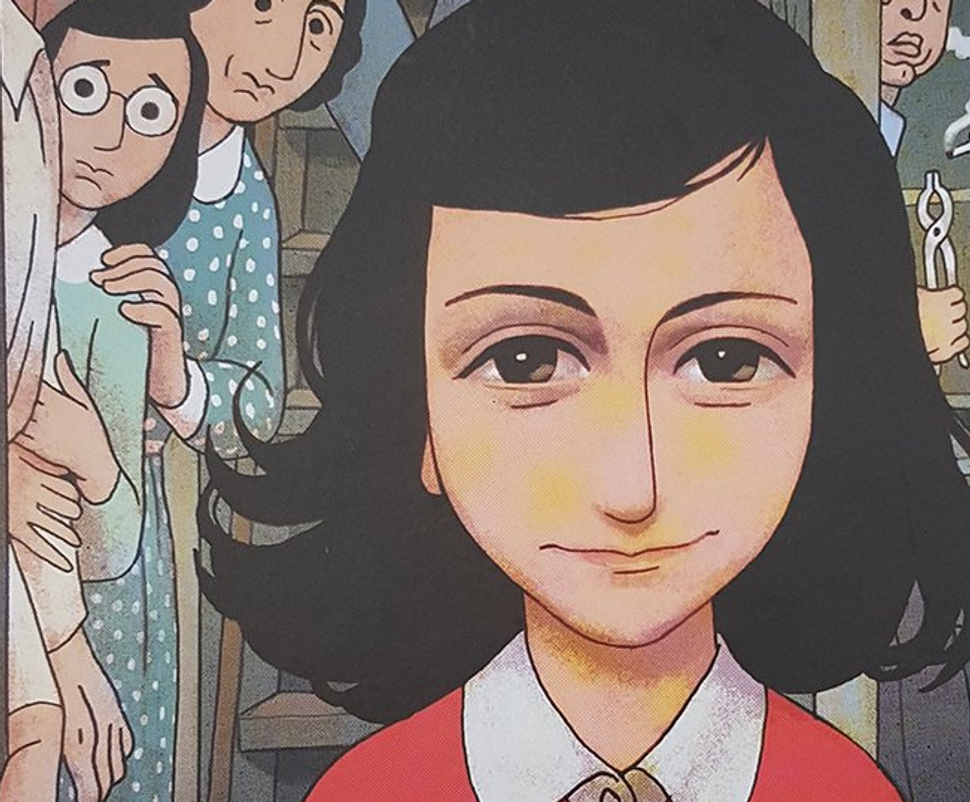 PARIS (JTA) — In a bid to preserve interest in the Holocaust by future generations, the Basel-based Anne Frank Foundation unveiled the first authorized comic book based on the teenager’s famous diary written in hiding from the Nazis in Amsterdam.

The 148-page adaptation, which is to be published September 18 in France and in some 40 languages worldwide, was presented to journalists in the French capital Thursday by the graphic diary’s Israeli illustrator, David Polonsky, and its writer, the Israeli film director Ari Folman, who is working on the first full-length authorized animation film based on the comic book.

The comic book, referred to as a graphic diary by its developers, was produced in cooperation with the Anne Frank Foundation, or Fonds, the organization that Anne’s father, Otto, entrusted with preserving her memory. It contains colorful illustrations both of realities described in the book, including the teen’s difficult relationship with her mother and sister, and her dreams and fantasies.

One full-page drawing, based on Anne’s writing about wanting to become a journalist, shows an older Anne sitting at her desk with framed newspapers in the background, including a Life magazine cover featuring a picture of her.

Another shows her family members and other Jews with whom they lived in hiding for two years in Amsterdam depicted as animals, corresponding to Anne’s humorous anecdotes about their personalities. Other drawings feature allusions to great visual artworks, including by Edvard Munch and Gustav Klimt.

“I’m worried we’re coming to an era where there won’t be Holocaust survivors on Earth, no living witnesses to tell the story,” said Folman, who was born to Holocaust survivors whom he said told him and his sister “way, way too many” horrible stories from the genocide. As they disappear, “the entire story of the Holocaust risks becoming something ancient so it’s essential to find ways to preserve” interest in the Holocaust, he said during a Q&A in Paris.

Anne, her sister and parents and several other Jews were deported in 1944 to be murdered following a raid by Nazi soldiers on the so-called secret annex where they lived in hiding with help from the Dutch resistance. Anne died seven months later in a concentration camp. Her mother and sister also died. Only Otto survived, and he edited his younger daughter’s writings and had them published in 1947.

Folman, who is well-known internationally for “Waltz with Bashir,” his film about Israel’s Lebanon War, said his first reaction was to “immediately say no” after being approached by the Switzerland-based Anne Frank Foundation, or Fonds.

Folman and Polonsky initially turned down the offer, they said, because artistically they doubted their ability to make a contribution that would stand out from the many films, books, theater shows, operas and musicals that have been produced over the story of Anne Frank, perhaps the world’s most famous Holocaust victim due to the publication in dozens of languages of her diary over the last seven decades.

There has been “too much done around the story,” Folman said. But he reconsidered after talking to his 95-year-old mother, whom she said is now “living with the goal of seeing the premiere” of the film he is making about Anne Frank.

The film, Folman told JTA, will treat also the last “horrendous” seven months in Anne Frank’s life, despite the absence of material on this period written by her.

“We used other historical sources to address this part of her life,” he said. “It was a condition of mine to work on this.”