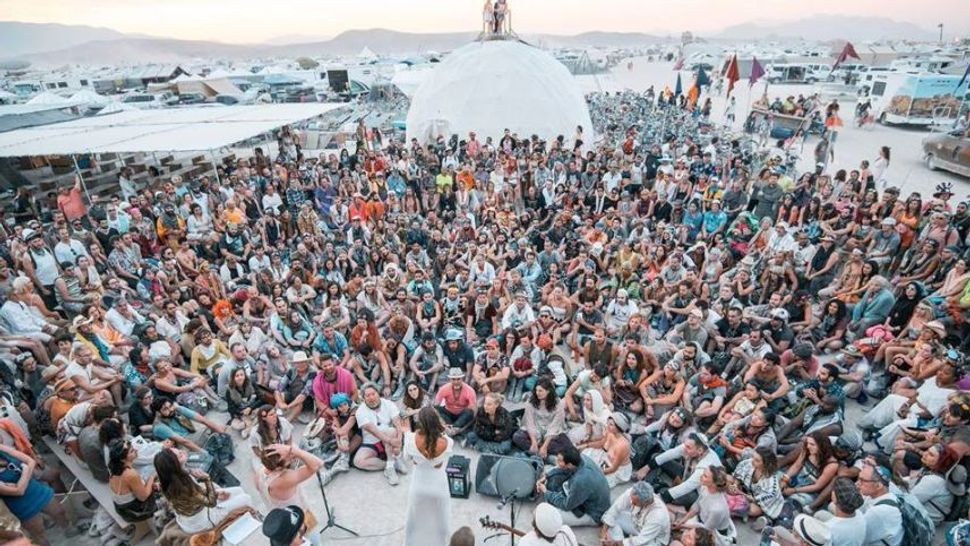 Usually, I shower for Shabbat. In fact, I usually shower every day.

But last Friday night, having already survived nearly a week without stepping under running water, I wiped myself with a cucumber-scented towelette and biked through the desert to the land of Milk + Honey.

Milk + Honey is one of dozens of theme camps at the annual Burning Man festival, the week-long celebration of art, music and general revelry on a barren Nevada plain. Some camps are defined by spirituality, some by sexuality, some simply by food. Milk + Honey has been hosting Shabbat services since 2008, making this the 10th time around. (The camp was known as Sukkat Shalom until 2014 when it was renamed to be more inclusive.)

Also in 2014, the group took on the Herculean task of providing dinner to its guests. (Other, smaller Shabbat gatherings had been part of Burning Man since at least 2002, and Milk + Honey’s wasn’t the only Shabbat option this year.) By the time I arrived at the site, which sported a 16-foot tall dome and 53-foot wide storage container that served as the service’s backdrop, an estimated 700 people had gathered, and I was once again cloaked in dust.

The theme of this year’s Burning Man festival was “Radical Ritual,” which, according to Milk + Honey’s organizers, is exactly what Shabbat is. “The idea that Shabbat can be expansive and exploratory and experimental is why it’s a perfect fit for Burning Man,” said Alessandra Wollner, one of the organizers and a member since 2011. Like Burning Man, she said, Shabbat is a chance to be “wilder versions of ourselves, more loving versions and more enlivened versions.”

The Burning Man engulfed in flames at the Burning Man festival, Black Rock Desert, Nevada, September 2, 2017.Jim Urquhart / Reuters To pause mid-rotation on the daily hamster wheel of our lives, to step away from the news, to eat across from one another rather than in front of the TV, to put down your damn phone — these are radical actions in the modern world. It’s what Burning Man offers for one week a year, and what Shabbat offers one day a week.

Here are some additional takeaways on how to make Shabbat even more radical, borrowing from the Milk + Honey model,and the ethos and esprit of Burning Man:

Promote sartorial self-expression. The art of Burning Man extends to the wardrobe, and every day is a parade of outrageous fashion, Shabbat included. At Milk + Honey, participants sported furry vests, imaginative face paint, bright tights in bold prints, and necks and wrists weighed down by eclectic jewelry. Many proudly showed large swaths of skin. Dress became part of the celebration; suddenly, Shabbat was a space for creativity.

The secular can be sacred. Traditional Shabbat prayers and songs comprised most of the service, though an unexpected highlight was the soulful singing by Matt Lindeboom of Sam Cooke’s 1964 civil rights anthem “A Change is Gonna Come.” In the past, Milk + Honey has sprinkled in some Bob Dylan, too. Mixing a secular song into Shabbat is a friendly nod to the non-Jews in the crowd, and builds a tuneful bridge between ancient prayer and today’s world.

The Burning Man site in the Black Rock Desert, Nevada, September 1, 2017.Jim Bourg / Reuters Find faith in other faiths. At one point, Sara Zaltash, a Burner who’s also a Muslim, stepped up to the mic to give the traditional Islamic call to prayer. She explained to us that she had offered to do so and the Milk + Honey organizers had enthusiastically accepted. She was clearly moved, and so were we. Those hushed minutes of impassioned chanting reminded us of our shared faiths, and the possibility of spiritual harmony. Eyes were wet.

Speak a different language. A few rows in front of me, a woman had been signing the Shabbat service to her hearing-impaired friend. When Victor Sella announced that we would all be signing the Shema in American Sign Language, the two hugged in disbelief. Though a coincidence, this gesture of inclusivity reverberated throughout the service. When someone least expected the Shabbat service to speak directly to them, it did.

Invite interruption. When you host an outdoor Shabbat in a pop-up city of 70,000 people, you’re bound to do sonic battle with the neighbors. A nearby camp thumped techno music, a float drove by pumping fire into the air, a 20-foot neon peacock parked itself next to us. Rather than treat these as unwelcome distractions, the organizers smiled and participants cheered. Silence can be sacred, but so too is opening your doors, literally, to the outside world.

Bless the strange. My whole life I have been blessed by my parents on Shabbat. A few lucky Burners attended the service with theirs (like song leader Ariel Wolpe and her father, Rabbi David Wolpe), but the rest of us were flying solo. For the benediction over the children, we turned instead to the stranger beside us to bless each other. One of the most profound aspects of Burning Man is how it accelerates intimacy. Blessing a stranger on Shabbat accomplishes the same thing, and I ended up talking for hours with the stranger who blessed me.

Blindfolded oiled wrestling at the Burning Man festival, Black Rock Desert, Nevada, September 1, 2017.Jim Urquhart / Reuters Double your recipes. The first 450 people to arrive were handed a popsicle stick, indicating that they were guaranteed dinner. The rest of us were invited to get comfy in the camp’s outdoor lounge and wait to see if there was enough food. There was. After the punctual people were served, we stragglers gathered around in small groups to share platters of vegetarian fare and recount our escapades from the week. Kudos to Milk + Honey for their over-preparation, and overabundance. At a radically inclusive Shabbat, everyone eats.