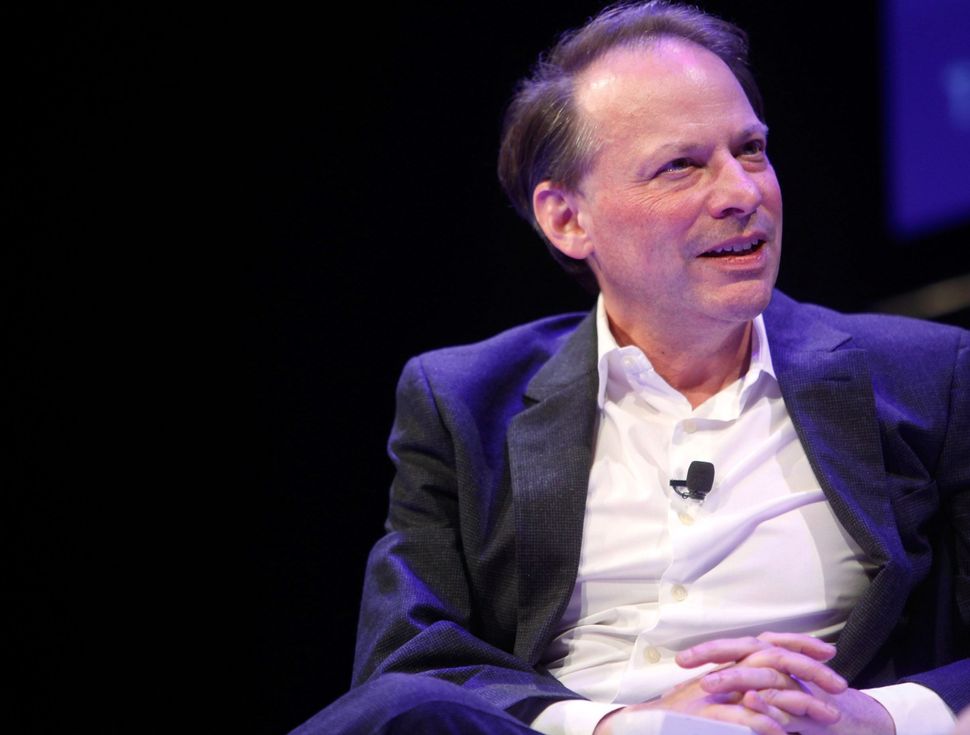 If you are a recent New York transplant who has found yourself possessed with longing for a time when the city must have felt more authentic, when you might have wandered the streets with great minds, shopped in distinctive stores, and felt exalted feelings, Adam Gopnik has a cure.

“All of the expectations, beginning with moving into a basement apartment in Manhattan, are not the expectations of your generation,” Gopnik told me the day that his new memoir, “At the Strangers’ Gate: Arrivals in New York,” hit bookstores.

We were sitting in The Coffee Shop, a Union Square diner decked out in neon lights and linoleum – very past-decades New York, except for the prices. (Get your $12 fruit salad here!)

It’s difficult to imagine a time when Gopnik, a staff writer at The New Yorker, might have felt adrift in the city for which that magazine is named. In its pages he has poked fun at downtown’s contemporary lust for creative pastries, examined the complex meanings and aesthetic influences shaping the 9/11 memorial, and, most New York of all, penned a wry chronicle of his years with his psychoanalyst. He has lived in, and written of, Paris; he was born to Jewish parents in Philadelphia and raised in Montreal. But to read his work is to feel, absolutely, that he is of New York.

Yet “At the Stranger’s Gate” is, as its title promises, a chronicle of being an outsider in the big city.

That experience manifests in several ways. First is the vision of Gopnik and his wife, Martha, living in apartments over which their control is minimal. They spent their first years in the city in an Upper East Side basement apartment ruled by a stunningly diverse array of cockroaches; their move to a chic SoHo loft, in the days when SoHo was, to use Gopnik’s term, a “village devoted to art,” was made less wholly magical by the encroachment of mice, rats, and mosquitoes.

More deeply, Gopnik’s meditation on what it means to be a stranger appears as a reflection on and critique of New York’s many diverse cultures of the 1980s, from the downtown art scene to the epoch during which Gentlemen’s Quarterly, now known as simply GQ, was a magazine run and read mostly by gay men. Those cultures were celebrations of outsidership, covert or pronounced, with their own signals of inclusiveness, which Gopnik observed both as a participant and a critic. Those roles often overlapped. A confession of personal pleasure at “being inducted into a new kind of shoptalk” at Gentlemen’s Quarterly, where he worked first as fashion copyeditor, then as grooming editor, leads into a digression on the sources of that pleasure: “professionals are taught the professional names for things in the belief that this will make having new thoughts unnecessary.” Ouch.

“I was struck by the fact that I was lucky to enter into all these astounding little microcosms – the guy who taught Italian fresco painting on Spring Street, the world of circus performers in New York,” Gopnik told me, recalling his early years writing for The New Yorker’s Talk of the Town, an assignment he took on starting in 1986. “Every door you opened was like this amazing advent calendar, you’d walk into these small universes, and yet the world around them was brutal and cold and humanly indifferent and only becoming more so with every passing year. I thought that was the particular poignance of that time.”

Gopnik writes about the gap between those two worlds, somewhat obscurely, as the contrast between “The Blue Room and the Big Store.” The Blue Room was the basement apartment, nicknamed romantically after one of Gopnik’s favorite Rodgers & Hart songs; Gopnik most clearly represents the big store as Bloomingdale’s, but it’s really mostly an abstract concept.

“The world was getting blowsier and bigger and harder to capture; the counter-life was taking place in smaller and smaller rooms,” Gopnik writes, citing the distance as “a kind of broken disjunction between public life and private experience.”

“Good writing is made out of, usually, a very narrow band of obsessions,” he told me. Culture, which he attempts to understand with a birds-eye completeness, is one of his. (Perhaps, after all, not quite so narrow.) He has a nuanced, if occasionally overwrought, understanding of the ideas, perceptions and aesthetics that characterize a time, and a continual drive to classify them. Not just the Blue Room versus the Big Store, but the matter of history, which he sorts into the categories of available and archival – available history is the lived-in past while archival history is that for which one has to dig, or as Gopnik put it, the Beatles versus Scott Joplin – and the currents of nostalgia.

He’s slightly jumped the gun on the 40-year anniversary of 1980, but senses that culture has changed enough for his own nostalgia to be newly du jour.

“I suddenly realized that, oh my god, SoHo 1984 is now part of the archival past,” he told me.

Yet while Gopnik shows his greatest authorial comfort revisiting his critical preoccupations, in “At the Stranger’s Gate” he reveals a series of more intimate obsessions.

“The two audacities in the book for me, [are] the eroticism of marriage, and talking about ambition,” he said.

His writing is more natural on the latter subject than the former, perhaps because ambition is baked into the words: Someone uncomfortable with their own aspirations would be unlikely to, on the first page of their memoir, proclaim “Life passes, and it’s difficult, but within it, pleasures and epiphanies arise – you marry the prettiest girl you’ve ever met in the greatest city on earth.”

When it comes to the pretty girl, and the marriage, Gopnik is open but more tentative. He tends to circle back to the same images: Dry mouth, “rapt” attention, two people in a small apartment “on top of each other in every imaginable way.” His continuing passion for Martha, a filmmaker, is apparent but constrained by the limited range of language with which he allows himself to discuss their relationship. It’s an establishment of an initial vocabulary of marital eroticism in a landscape that, in Gopnik’s vision, makes speaking of such an experience taboo. That vocabulary could bear – forgive me – fleshing out.

For his fans, that’s good news. Gopnik mentioned to me the idea of cultural paradigms, and the danger they pose for those who make a profession of observing them: “Those paradigms break.” In “At the Stranger’s Gate,” he writes briefly about the late, great New Yorker writer Joseph Mitchell, who attributed the end of his writing career to the passing of the particular New York he chronicled.

If Gopnik’s paradigm includes a contemporary chill prudency of language towards marital lust, he hasn’t quite broken it yet. Given that his sense of ongoing creativity as a writer seems to rely on the challenge as yet unmet, that shortcoming may be, in fact, a net positive.

“I’ve become a different kind of writer in the last five years,” he told me. “The paradigm changed and I tried to respond to it.”

“There’s a part of me that feels that if you don’t attempt that renewal, it” – opportunity, ability and impetus, all in one – “will vanish on you.”