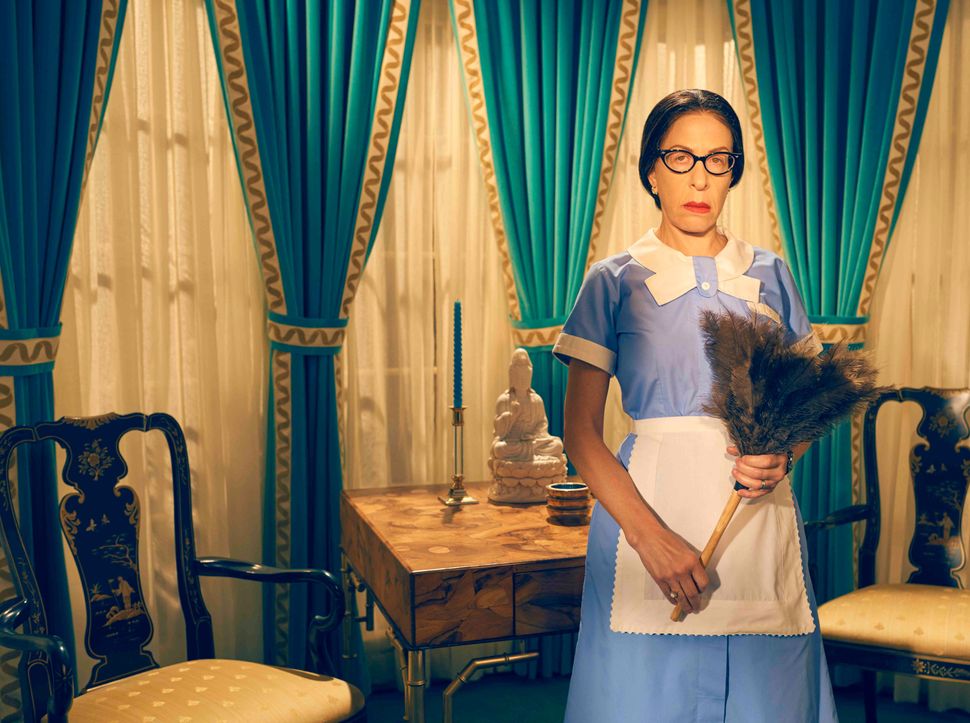 At last night’s Emmy Awards, actress Jackie Hoffman gained notoriety for seeming, uh, ungracious for her reaction to losing out on a trophy to Laura Dern. To commemorate (or observe) that open, we’re re-running our interview with the actress from earlier this year.

Actress/comedienne Jackie Hoffman has long been a fixture on the New York scene. The rubber-faced character actress known for a long-lived and successful Broadway career was recently cast as Mrs. Teavee in the forthcoming Broadway production of “Charlie and the Chocolate Factory” and most recently played Mamacita, Joan Crawford’s loyal German maid, in Ryan Murphy’s “Feud: Bette and Joan,” the story of the rivalry and tempestuous relationship between Joan Crawford and Bette Davis during the filming of “What Ever Happened to Baby Jane.”

“I would say it’s a good year,” Hoffman told me during a lunch break from “Chocolate” rehearsals.

Hoffman grew up in an observant household in Queens, NY. “My mother came from a very religious home; my father was barely Jewish.” Mom, who is thrilled that her daughter will appear on the pages of the Forward, won.

“It was a very funny family and I became involved in school plays and stuff like that very early on. I used to imitate Frank Sinatra singing ‘You Make Me Feel So Young’ not knowing why it got laughs.”

Hoffman’s early professional career started with a booking at Hershey Park as Jane Wayne, the terror of the plains, a mean cowgirl who gets involved in a shootout at the Trailblazer Saloon — six times a day. From there, she went to Second City, the venerable Chicago comedy troupe.

Returning to New York, she appeared in a string of Broadway hits including “The Addams Family,” “Xanadu” and “Hairspray.” She has also appeared in the films “Birdman,” “Garden State” and “Kissing Jessica Stein.” On TV, she played a recurring role in “The New Normal” produced by Ryan Murphy, who remembered her performance when casting “Feud” and asked for an audition tape.

“They like to tell me that the tape was just a formality,” Hoffman told me. “I’m just flattered that he remembered me.”