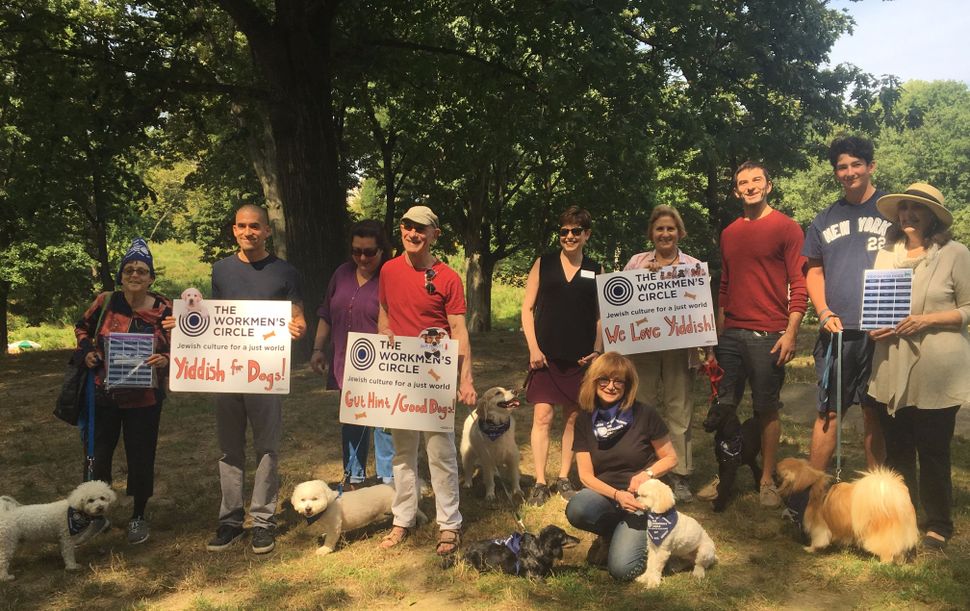 There are certain objects and behaviors that are unquestionable hallmarks of New York: bagels with smoked fish, ill-disguised fury at tourists who walk too slowly, humans dressed as Elmo accosting the unwitting in Times Square. But for those like Ted Cruz, who in a long-past era — could it be possible I’m remembering it with fondness? — criticized, ahem, “New York Values,” the city has produced a newly daunting prospect: dogs who respond to commands delivered in Yiddish.

As The New York Times’ Alix Strauss reported, the Workmen’s Circle/Arbeter Ring, a storied Jewish not-for-profit that formerly helped operate the Forward — and shares its socialist past — recently held its first-ever Yiddish education class for canines. Held in Central Park, and attracting seven very enthusiastic human attendees, the course schooled the pooches present in the basics of Yiddishkeit dog etiquette.

Among those standards were commands to sit (zits), stay (shtai), come (kum) and lie down (arop), as well as signals to the pups that they had been good (gut) or were getting a treat (maykhl), and the dreaded imperative “no” (neyn).

The humans in attendance ate chocolate rugelach, the dogs munched on apple-stuffed kichel, traditional bowtie-shaped cookies, and a rich cultural tradition in the midst of a revival gained some new four-legged adherents.

“This is an affirmation of culture and life,” a visiting California resident named Amanda Devons told Strauss. “It’s another positive way of being Jewish and bringing back a dying language. I had no one to speak it to. Now I can speak it to my dog.”

“New Yorkers love their dogs,” said the Workmen’s Circle’s director, Ann Toback. “This was a great way to integrate the two.”