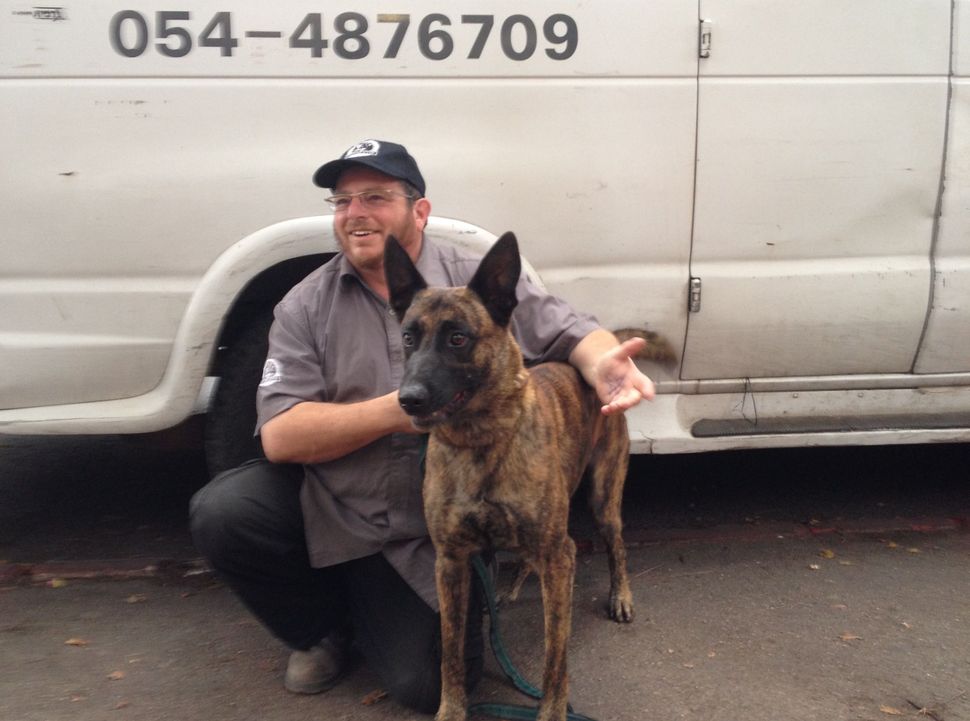 An elite squad of security dogs has joined the war on the new wave of Palestinian terror attacks in Israel — and they know Yiddish.

I recently spent an afternoon with the Israel Civilian K9 Unit to get a first-hand look at these four-legged soldiers.

“Zitz!” the private unit’s founder Mike Guzofsky barked at a handsome Dutch Shepherd by his side.

There are some five dozen dogs in the unit, mostly Belgian and Dutch Shepherds imported from Europe for up to $10,000 each.

Once in Israel, a group of volunteers train and manage the furry troop, which is deployed all over the country.

Its mission is two-fold: Some are trained to participate in search and rescue of missing persons, which occupy the bulk of the unit’s time. Others are bred as “security dogs,” specifically trained, Guzofsky explained, to protect Jewish civilians from would-be assailants.

The K9 unit is privately run but sometimes works with Israeli law enforcement or military.

I joined the K9 Unit recently for a training session at the Gush Etzion junction in the West Bank, a contentious spot in the Judean hills that is often a target for terrorists. Ezra Schwartz was killed here and three young men were kidnapped and later murdered in an incident that sparked the Gaza war in 2014.

Peeking into what can only be described as a Jewish settler version of the Scooby Doo van, I was greeted by a large dog and two young men, one South African and the other from Toronto, both IDF soldiers who volunteer with the K9 Unit in their spare time.

I spent the afternoon watching drills and simulated rescue missions, including a search in the forest accompanied by a drone hovering above.

The highlight was seeing Seven, a fierce Belgian Shepherd, pounce and terrifyingly clamp his jaws onto the protective arm-pad of the unit’s expert trainer.

The display was impressive, but I had a burning question for Guzofsky: Why the Yiddish?

“Having a dog that would be able to interact with a Yiddish boychik — that could be useful,” he explained. “There was a search in the Jerusalem forest for an autistic ultra-Orthodox kid that went missing,” he recalled. “When we found him he was in a traumatic state, and I think having Uman there responding to Yiddish commands helped him.”

But there’s also another reason.

“Odds are the average Arab doesn’t know Yiddish,” Guzofsky said, “so we don’t necessarily want him being able to issue commands.”

Or as he put it in a YouTube video: “The dogs that you see here licking me are really very friendly dogs to their Jewish masters, but they’re very, very dangerous dogs if you are an Arab terrorist trying to penetrate into a Jewish town.”

So far, there are five dogs who respond to Yiddish commands: David, Moishe, Zalman, Seven and Uman.

With the recent spike in violence and terror attacks throughout Israel, Guzofsky’s dog unit has become an unlikely recourse for citizens seeking extra security — and more Israelis are looking to buy the guard pooches, he said.

“The phone is off the hook,” he said. In one recent week, “we passed out 11 dogs and registered 20 new people with dogs for protection training.”

Guzofsky, who also goes by the alias Yekutiel Ben Yakov, grew up in Far Rockaway, Queens.

The one-time yeshiva student got involved with the Jewish Defense League and eventually moved to Israel where by 1990, when Kahane was assassinated, had become “Rabbi Kahane’s chief of operations in Israel.”

He has remained active in the far-right wing, anti-Arab Kahanist movement ever since, and under the Israeli government microscope.

On the eve of the Oslo Accords in 1995, he threw an egg at then-Israeli Ambassador to the U.S., Itamar Rabinovich, and shouted, “Kahane lives!”

Now, he only regrets that he missed, Guzofsky told me.

He’s banned from Britain, accused of advocating Jewish terrorism, and was accused of supporting the assassination of Israeli Prime Minister Yitzhak Rabin in 1995.

“I was accused of firebombing Al Fajr newspaper and was found not guilty. I sat in jail for 9 months.”

I asked him if he was guilty of the 1983 incident in East Jerusalem and he said “absolutely not.”

“I don’t violate the law,” he said, and referred to his time in prison as “the price I had to pay for my Judaism.”

Still, his history of justifying, including the Baruch Goldstein massacre, is well documented by groups like the ADL.

I asked him if his dog unit was guided by Kahane’s militant philosophy. If, as Kahane famously said, “For every a Jew a .22” — would Guzofsky’s revamped motto be, “for every Jew a Dutch Shepherd?”

“That being said,” he added, “we’re professional people and if there’s an Arab missing we’re going to do the work.”

Indeed, the K9 Unit’s primary mission remains the search and rescue unit, crossing the country several days a week to track down missing people — and Guzofsky is proud of that.

“To the JDL and Kach people who don’t think it’s sexy enough to look for an 84-year-old man with Alzheimer’s …well, this is my niche.”