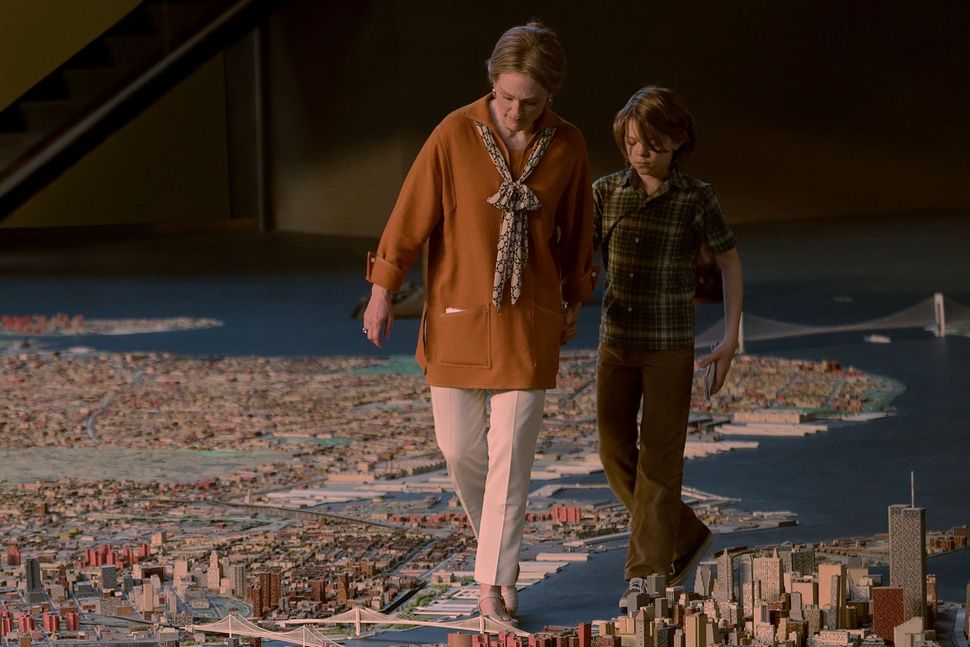 It’s a bizarre thing to say about a film that started life as a graphic novel, but the soundtrack is the key component of “Wonderstruck,” the new movie by director Todd Haynes.

Based on the work of the same name by Brian Selznick (of “Hugo” fame), who wrote the screenplay, it traces the strangely entwined lives of a deaf girl — Rose (Millicent Simmonds) from uptight upper class Hoboken, New Jersey, in 1927 and a young boy — Ben (Oakes Fegley), from Gunflint Lake, Minnesota, in 1976. Upon the sudden death of his mother, he is searching, trying to find out who his father is. Rose is, in a different way, looking for her mother in the relative freedom of Manhattan.

In “Far From Heaven” in 2002, Haynes showed that he could present a particular cinematic sense of an era. Here in “Wonderstruck” the challenge is not only to present two distinct eras — from a generation before and a generation after the 1950s of Haynes’s breakthrough film — but to present an uneasy, unclear yet suggestive relationship between them.

In Selznick’s book, the text of Ben’s story is intercut with uncaptioned pencil drawings of Rose’s story. In the movie, Rose’s deafness and era is captured in highly appropriate fashion by telling her story using black-and-white silent film. But, because contemporary film plays with both vision and hearing, Haynes needs his soundtrack to evoke the different eras, but, while reflecting the connections between them not always flag the dissonance between the genres of films that follow the two characters.

In the book we can just flip the page: in the movie, Carter Burwell’s soundtrack is crucial to the elegance and effectiveness of the montage.

This is especially difficult because, technically, all the music that accompanies the black-and-white Rose story is external to the action (or non-diegetic). But, when we enter the 1970s technicolor and sound of Ben’s life the subtle combination of diegetic and non-diegetic sound helps the movie perform, highlight and show its protagonists inability to hear.

That is, lost communications, misunderstandings, and unheard sounds are characteristics of “Wonderstruck” as well as of Ben and Rose’s individual stories and their connection. People, without realizing, tell Ben and Rose things that they can’t hear, and sometimes by virtue of the soundtrack’s design, we don’t either. The score and the action trains us to understand the careless privilege of hearing.

Of course, understanding is not the same as hearing. As with the movie characters, so with the movie audience — some of those who don’t hear are the best listeners.

The children’s stories are, thankfully, not played for schmaltz. Both are played with reassuring amounts of agency and, though carefully plotted, little cliche. The matches on action that weave us from the movie of Rose’s life to the one of Ben’s life are artfully done. Suspense is heightened as the era changes to 1976 and we await the denouement of a mini drama in 1927, but our understanding of their shared locales is enriched. Scenic echoes and overlaps, comparisons and juxtapositions lead to the sort of rich and familiar viewing experience you get from a TV series that revisits characters and locations.

And then there’s Julianne Moore.

She has two cameos. Both silent. Both luminous. One cold, one warm. Both perfect.

In the final act, Haynes is faced with a nigh on impossible task of closure. The temporal and geographical gaps between characters have been resolved, the emotional work has been done, there are only Ts to cross and Is to dot.

Even though, without some sound or color, Haynes has less, he has Moore.

The deafness in the film is both tangential to the plot and central to its theme. This isn’t (the also excellent) “Deaf Jam” where a character’s deafness is the reason for the action. No, when characters cannot hear things the audience is aware of that loss and becomes sensitized to other losses — parents, freedom.

The silence of deafness isolates. In the context of the film it acts to exacerbate the distance the characters from each other and from the audience. Because of Ben’s recent trauma, his family seem frightened to touch him, keeping him at arm’s length. Because of the forbidding formality of her family, Rose likewise is barely touched, even by her fond elder brother.

The conclusion of the film proper comes as Moore enfolds the young boy on the floor of the New York City panorama, collapsing the tensions, sorrows and differences between the two protagonists, the two filmic modes and the aching lack of physical affection in the film.

The ending functions as an epilogue to this emotional cathexis. The characters watch a darkened New York City as relationships unfurl: the intensity of their past experiences decompress and, in new, real relationships, there’s hope for the future.