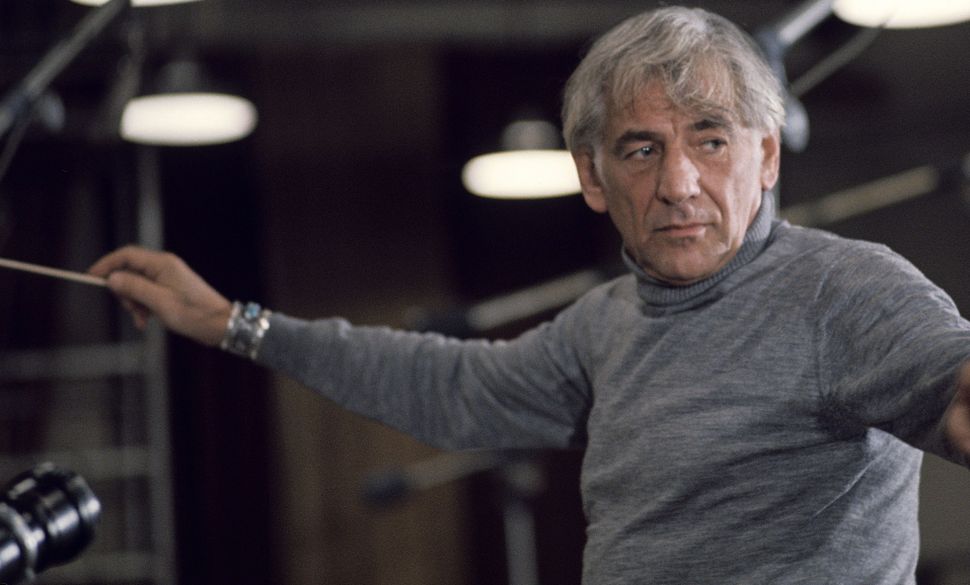 There’s a theory that Walt Whitman’s memory rises in public awareness when his ideal of inclusive democracy sinks from view, that it returns us to our faith that all Americans can become parts of the whole. The same might be said of Leonard Bernstein, who was surely the most Whitmanesque figure that America ever gave to the music world.

His restless Jewish-American ghost is back at Lincoln Center, whose very construction reflected his convictions about the populist role of the arts when he oversaw the music for its 1959 ground-breaking. The centennial of Bernstein’s birth comes on August 25, 1918, and the New York Philharmonic has begun a months-long festival honoring the occasion. The core of the series runs through November 14, but more programs will take place into next year.

The tribute has a justifiably possessive title, “Bernstein’s Philharmonic: A Centennial Festival.” The all-around musician — composer, conductor, pianist and educator — led the New York Philharmonic as its music director from 1958 through 1969, then served as its Laureate Conductor until his death in 1990. The festival insistently combines strata of Bernstein’s creative personality, from his wizardry with popular Broadway melodies to his orchestral works that explored love and faith. It probes links between Bernstein pieces and works by George Gershwin, Aaron Copland (whose Symphony No. 3 appears in a February, 2018 program) and other composers.

The opening program, which was performed on October 28 and 31, exemplified the festival’s varied and searching focus. It began with a compact yet free-feeling 2016 work written in tribute to Bernstein by the young Dutch composer Joey Roukens — titled “Boundless: Homage for L.B.” It continued with “Serenade,” a delicately aching Bernstein work for violin and orchestra. The work, which has Plato’s Symposium as its source, had its first performance in 1953. It follows a discussion among Greek philosophers and writers as they discuss the nature of love.

The Philharmonic, with Joshua Bell as the soloist, gave it an unusually sensitive performance during its first performance. But what stood out for me was Bernstein’s audacity in writing a piece of music that could express something so elusive: Feeling permeated by thought, the heart mediated by the mind.

It reminded me that Bernstein was an unusually literate composer. He was known to have often spent whole nights after days making music reading poetry, novels and most everything else.

His fellow composer Lukas Foss once made a comment that reflected both Bernstein’s reading and the regard that writers, painters, composers, actors and dancers of 1950s New York had for how the arts interacted: “Probably the reason he had so much success with his collaborations in the musical theater was that he was fired up by the intrusion of the other arts, that they inspired his imagination. I would say that Lenny was the most well-read composer I have ever met.”

The first program culminated with another piece — Symphony No. 1, titled “Jeremiah” — partly inspired by language, from this composer who once locked himself in his college dorm room and spent an exhausting and ultimately frustrating time trying to invent his own.

“Jeremiah” premiered in 1943, when Bernstein was 25 years old. He’d begun it in the summer of 1939, the year he graduated from Harvard. Europe was moving toward World War II. That Spring, he’d made his first appearance as a conductor, leading his own incidental music for a college production of Aristophanes’ “The Birds.” A year before that, he’d made his debut as a pianist playing his own music. The symphony’s story holds these braided origins of Bernstein’s artistic identities. It distills his Jewish point of view in a last movement, in which a mezzo-soprano sings Hebrew verses from the Book of Lamentations.

One can only imagine the impact of this piece on American Jews who were becoming more aware by the day of Hitler’s determination to destroy European Jewry, and on non-Jewish audiences who were probably unfamiliar in many cases with the liturgical motifs on which Bernstein based some of his music, framing the prophet’s powerful poetry as he agonizes over the destruction of Jerusalem by the Babylonians:

“Judah is gone into exile because of affliction,/And because of great servitude;/She dwelleth among the nations,/She findeth no rest./All her pursuers overtook her/Within the narrow passes.”

The program was conducted by Alan Gilbert, the Phil’s former music director and the closest that the orchestra has come to a leader (with adjustments for his outwardly more casual, less willfully heroic personal style) who felt Leonard Bernstein’s urgency about making classical music part of American life. Mezzo-soprano Kelley O’Connor gave a supple, deep-reaching force to Jeremiah’s vocal part.

Through the upcoming programs, one feels that a kind of familial care was taken to build a mirror to Bernstein’s legacy.

The first program in November ends with the relatively well-known Symphony No. 2, The Age of Anxiety.” It starts with the infrequently performed, “Prelude, Fugue, and Riffs” (with the orchestra’s fine principal clarinetist Anthony McGill as soloist). Sandwiched between them, comes that glistening celebrity of compositions: Gershwin’s “Rhapsody in Blue,” performed by Makoto Ozone, the highly-regarded Japanese jazz virtuoso.

The final program in the festival’s November stretch will cross a bridge between beginnings and endings. The orchestra will perform Richard Strauss’ symphonic tone poem, “Don Quixote,” which gives musical life to Cervantes’ poem. It was on the program at Carnegie Hall in 1943 when Bernstein made his explosive conducting debut as a last-minute replacement for Bruno Walter who was suffering from the flu. The program’s other piece is Bernstein’s Symphony No. 3, “Kaddish,” which marked an especially complex return to his Jewish roots to ask questions about faith and loss.

Long-time Bernstein associate Leonard Slatkin will conduct “Kaddish,” and it will be narrated by the actor Jeremy Irons. Slatkin, according Philharmonic program notes, has spoken of asking himself whether “Kaddish” has more meaning these days than when it was composed fifty four years ago. The work’s text — in English, in the version to be used, instead of the original Hebrew — is a turbulent debate between man and God.

Of course, sophisticated and joyous entertainment was a pillar of Bernstein’s career, and the Philharmonic’s New Years Eve concert will welcome his birthday year with excerpts from “West Side Story,” “Candide” and other theater works.

Even today, Bernstein’s place as one of the 20th Century’s most original and appealing composers gets eclipsed by the sheer whirl of his varied career. He famously struggled to reconcile his creative ambitions with his commitment to performance, leaving an after-image of an artist who became entangled in his persona as the ultimate multi-tasker. Sadly, there have been few such organized efforts to stitch Bernstein’s disparate legacy as a composer, conductor and teacher into a whole.

Before it ends, the festival will offer a panel discussion by former and current Philharmonic musicians about working with Bernstein; kids will get a chance to attend a living recreation of one of Bernstein’s Young People’s Concerts, led by Leonard Slatkin. Both of those events are set for November 11. On February 25, 2018, at Lincoln Center’s David Rubenstein Atrium (site of several festival programs) the Philharmonic will present Bernstein’s Mahler Marathon: The Sony Recordings, 13 hours of performances.

As attendees listen, Bernstein’s marked scores from the orchestra’s digital archives will be projected in real-time, and guests will read excerpts from Bernstein’s writings on Mahler.

One wishes Bernstein’s PhiIharmonic did more with Bernstein’s outspokenness against war, and his vocal activism on behalf of civil rights, the environment and other causes. Born just before the end of World War I, he grew up amid red scares, the Great Depression. He declared his support for the Abraham Lincoln Brigade, in its fight against Fascism in Spain, and helped to spread the first news of the Holocaust. He was with Martin Luther King at the march on Montgomery and sharply opposed the Vietnam war.

He even spoke out against the role of money in politics and his view that multi-national corporations enforce the inequality of American life. One wonders what he’d say today, when social policies he supported are under unprecedented attack from high places.

But Bernstein’s Philharmonic gives a rich exposure to the orchestra’s iconic 20th Century father figure. It puts him on an open road to new audiences. It makes his creative dynamism feel personal in a way that evokes Whitman’s sense of union, when he wrote of his poetry: “Who touches this, touches a man.”