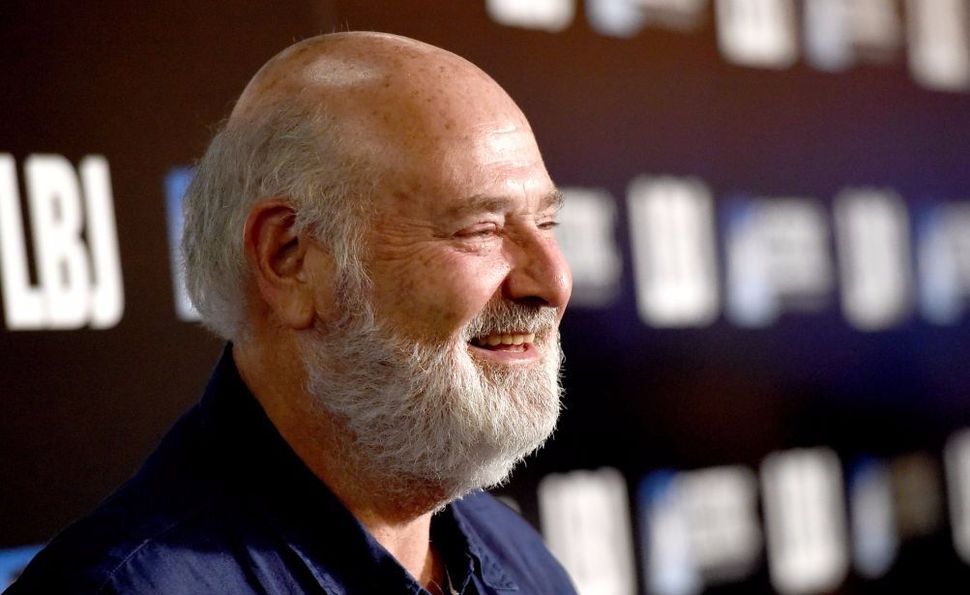 (JTA) — By his own admission, Rob Reiner was not the right person to direct “LBJ,” a film biography of Lyndon Baines Johnson, the 36th president of the United States.

“I had a lot of trepidation,” he said in a telephone interview with JTA.

In addition to a successful career as an actor, Reiner is one of the most bankable directors plying the trade today. His films run the gamut from lighthearted fare like “This is Spinal Tap,” “The Princess Bride” and “When Harry Met Sally,” to serious drama such as “A Few Good Men” and “Misery.”

But “LBJ,” which opens Friday, was different because he had a personal connection to the subject.

“I was of draft age during the Vietnam War, and I looked at Johnson as the enemy,” said Reiner, 70. “I thought he could send me to my death.”

But he revised his views of the former president — both as a man and a potential movie subject — when he read Joey Hartstone’s well-researched script. Reiner said additional research, especially Doris Kearns Goodwin’s illuminating “Lyndon Johnson and the American Dream” and Robert Caro’s multi-volume Johnson bios, clinched the deal.

Reiner discovered a man far more nuanced than he had imagined. Yes, Johnson expanded and prolonged the Vietnam War. But he also delivered on John F. Kennedy’s legacy and bullied a recalcitrant Congress dominated by Dixiecrats to pass the Civil Rights and Voting Rights acts, increase funding for education, and create Medicare, Medicaid and Head Start.

“It was like there were two presidents — one for the Vietnam War and the other with great domestic programs,” the actor-director said. “If it wasn’t for Vietnam, he’d have gone down as one of the greatest presidents of all time. I wanted to make a film that would reveal who this guy was.”

It wasn’t just the dichotomy of Johnson’s politics that Reiner wanted to capture, but the contradictions of his personality, which informed his career.

“What surprised me was his insecurity,” Reiner said. “He had this recurring nightmare where he dreamed he was paralyzed.”

Johnson also had a complicated relationship with his mother in which “at times he felt unloved. I thought that was interesting,” Reiner said.

Also interesting was Reiner’s choice for the actor to play the lead: Woody Harrelson, best known as the slow-witted Woody on “Cheers” and for drawling comic roles in “White Men Can’t Jump” and “Zombieland.”

“When people heard about the film, they’d ask me who I’d cast for the lead, and when I told them Woody Harrelson, they’d say ‘get out of here,’” he recalled. “I’d say, ‘wait until you see what he does.’”

The prosthetics change Harrelson into a close approximation of LBJ, but it is Harrelson’s subtle yet powerful performance that is transformative.

“I told him don’t try to imitate Lyndon,” Reiner said. “Just give me his essence and that relaxed [Woody].”

The film delves into a trove of compelling anecdotal info with which most non-political science majors (and majors who may have gotten D’s) are likely unfamiliar. For instance, JFK (played here very competently by Jeffrey Donovan of “Burn Notice”) took Lyndon as his running mate at the suggestion of his father and over the objections of brother Robert (played by Michael Stahl-David).

“LBJ” is infused, in part, with the director’s personal experiences as a political activist. Nearly two decades ago, he spearheaded a successful effort to raise cigarette taxes in California and use the money to fund early childhood development programs. Subsequently, Reiner was appointed chair of the commission to oversee the project, a post he held for seven years.

Around that time, he briefly considered running for office. Reiner asked his wife and three children for their opinions and the results were — how to put this? — discouraging.

Nevertheless, Reiner has remained politically active in liberal causes, most recently as a founder of the Committee to Investigate Russia, which he calls “a nonpartisan [organization] that puts the spotlight on what the Russians were able to do, particularly in the last election.”

Reiner is not a fan of the current administration, to put it mildly. As he describes it, “without changing a single frame,” his film changed between the time it was first screened, when Obama was president, to its release this week with Trump in the White House — meaning a film about a troubled presidency transformed into one about how best to govern.

And, yes, his activism “absolutely” has hurt his career, Reiner said.

Even in liberal Hollywood, Reiner’s outspokenness has earned him ridicule  — not unlike the incessant ribbing he took on “All in the Family” playing the liberal Mike “Meathead” Stivic opposite his arch-conservative father-in-law Archie Bunker.

“There’s no question that people have turned away from me,” he said. “You should see what some people call me on Twitter. But I have to live on this planet and be who I am.”

And who he is, of course, is the scion of Carl Reiner and the late Estelle Reiner from the Bronx, New York. Dad, of course, is the author/producer/actor/director of such hits as TV’s “The Dick Van Dyke Show” and the films “Oh God!,” “Where’s Poppa?” and a string of Steve Martin comedies. Mom famously ordered whatever Meg Ryan was having in the legendary “When Harry Met Sally” scene filmed at New York’s Katz’s Deli.

“My grandmother spoke Yiddish in the house, and my mother and father spoke a little Yiddish, too,” said Reiner, who was a bar mitzvah. “They decided to bring a teacher in to teach me Yiddish, too. I learned a little, but he also taught the history of the Jews and it was like having a little shul at home.

“It was home shuling,” he quipped.

Reiner’s sister-in-law is a rabbi, “and we’ll have Passover,” he said. “My wife’s mother lost her entire family in the Holocaust and my aunt — my father’s brother’s wife — did also, something we always think about.

“Yes, all this is reflected in my work. It’s my sensibility. I’m a Jew. I was raised a Jew. I value honesty and integrity and knowledge and education and all those values I was raised with.”

Of course, Reiner was raised with another “Jewish value” as well: comedy.

“Jews are funny,” he said. “And there’s a reason we’re funny. You have Cossacks. You have Hitler. You have a lot of things weighing down on you. You have to have a sense of humor or you can’t survive.”