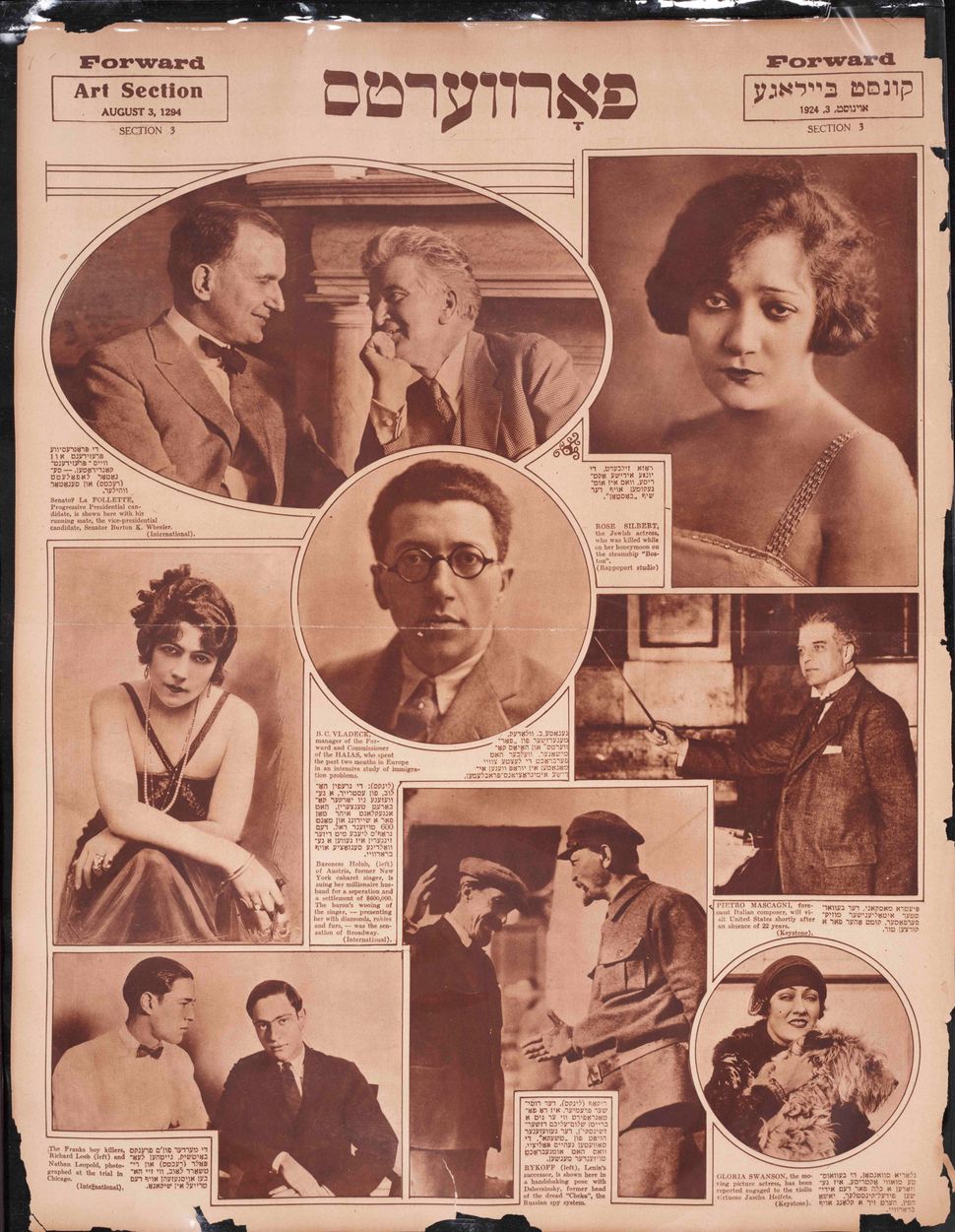 Senators, Steamships, Gloria Swanson and So Much More: The cover of the August 3, 1924, Art Section provides a glimpse of the American Jewish life covered by the Forverts. Image by Forward Association

More than a century of Jewish life in America, reported in Yiddish, will soon be accessible through a searchable online database. The entire run of the Forverts newspaper — the most widely read Jewish newspaper in the world for much of the 20th century — will become part of the Historical Jewish Press Project, known as JPress, in digital form, thanks to an agreement made among The Forward Association, the National Library of Israel and Tel Aviv University. The JPress electronic archive currently encompasses more than 50 publications from Europe, America, Africa and Israel, amounting to more than 1,250,000 pages in all. The Forward Association has published the Forverts, also known as the Jewish Daily Forward, since its inception in 1897.

The JPress database offers newspapers in English, French, Hebrew, Hungarian, Judeo-Arabic, Ladino and Russian, as well in Yiddish. The Yiddish collection includes the two prewar Warsaw dailies, Haynt (Today) and Der Moment (The Moment), as well as the literary weekly Literarishe Bleter (Literary Pages). Significantly, the circulation of the New York-based Forverts outstripped them all. With regional editions in Los Angeles, Chicago, Philadelphia and Boston, as well as in New York, at its peak the Forverts had a daily circulation of several hundred thousand. It was the largest Jewish newspaper in the world from the first to the seventh decades of the 20th century.

“We are delighted that TAU and the National Library of Israel will be making the Forverts archives available digitally to readers worldwide,” said Samuel Norich, publisher and CEO of The Forward Association. “This historic step recognizes the great importance of our journalism over the past 118 years. The fact that it will be completely searchable, displaying every occurrence of any word, will provide a particularly invaluable public service, in perpetuity.”

The Forverts, which continues to publish biweekly in print and daily online at Forward.com/Yiddish, is much more than a news outlet. As one of several leading organizations founded in New York near the turn of the past century to serve Jewish immigrants, it is a cultural icon and a part of American history.

Forverts founding editor Abraham “Ab” Cahan was a celebrity in the Jewish world and beyond. He created the first newspaper advice column in history, A Bintel Brief (A Bundle of Letters), and recruited legendary writers like Morris Rosenfeld, the “poet of the sweatshops,” and Nobel Prize winner Isaac Bashevis Singer. Cahan’s own novel, “The Rise of David Levinsky,” has become a literary classic. Thanks to the digitization being undertaken in Israel, the Forverts’s priceless day-to-day coverage of news, politics, culture, society, fashion and gossip will become available to readers worldwide.

The expansion of JPress’s American Jewish section has benefited greatly since 2012 from the work of the Manhattan Research Library Initiative (MaRLI), a joint entity representing the libraries of New York and Columbia universities and the New York Public Library. Headed by Evelyn Ehrlich of New York University, MaRLI has supported the digitization of several American Jewish newspapers, first in Yiddish and Ladino and then in English. Private donors like the Shapell family, the Constantiner family and the Cimet, Cimet-Lerer and Singer-Cimet families have funded the digitization of several other highly noted Yiddish newspapers like the Haynt and Literarishe Bleter. Recently, the Judaica division of Harvard University Library, headed by Charles Berlin, initiated the digitization of the entire Polish Jewish press, which encompasses more than 600 publications, most of them in Yiddish. “The importance of Yiddish and the unique role played by American Jewry in expanding its journalistic production in the past, as well as in preserving its culture for the future generations, is embodied by our project,” Tsur said.

“I am extremely pleased that the Forverts archive will now be digitized and included as part of the JPress project. This significant addition to our rich digital collection enables us to make accessible a distinct and important perspective on the history of American Jewish life,” said Oren Weinberg, director of NLI. Weinberg also expressed gratitude to TAU, Tsur and Norich for their tireless efforts to bring the Forverts archive online.

NLI is the central institution devoted to national memory, not only of the State of Israel but also of the Jewish people dispersed across the globe. The 120-year-old National Library is dedicated to making the digitized content of its extensive collections freely and universally available through its groundbreaking initiatives in technology, education and culture. Its digital holdings, among its numerous international publications, include several periodicals of particular interest to scholars of Israel’s history and of the Hebrew language. Among them are the newspaper of Israel’s labor movement, Davar, as well as HaTsvi (The Stag), the periodical created by Eliezer Ben-Yehuda, who revived the Hebrew language in the modern era.