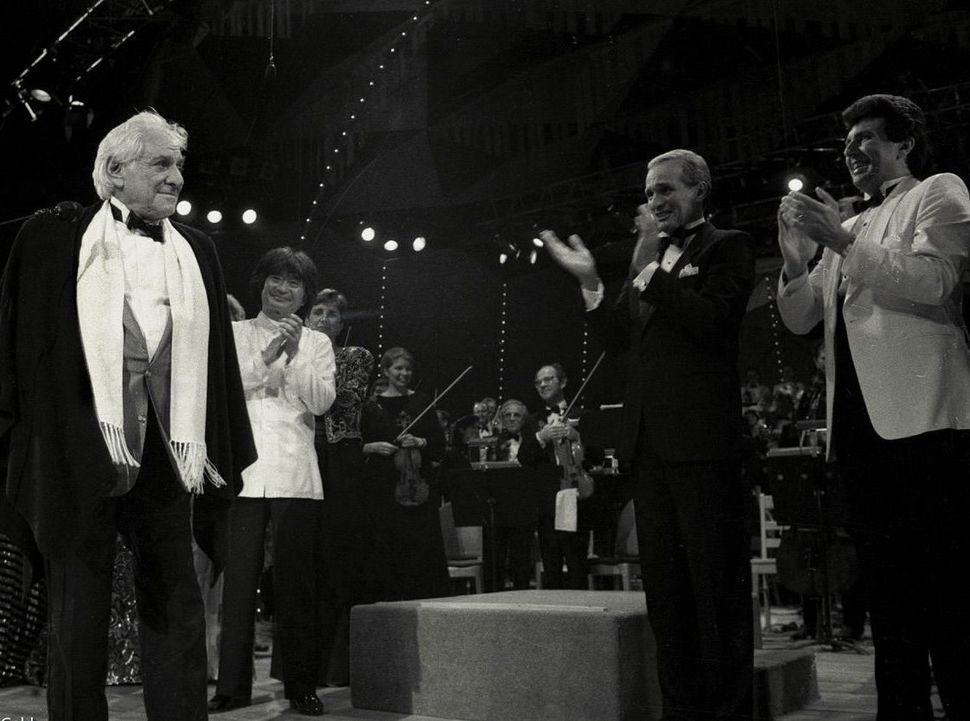 Judging by her portfolio, Bonnie Geller-Geld is a little like the character in Woody Allen’s “Zelig” who has a knack for inserting himself into life’s big moments.

She was on the scene with her Canon DSLR in 1988 when Leonard Bernstein took a bow at his 70th birthday tribute-concert at Tanglewood in Lenox, Massachusetts. She captured the contrary political styles of Benjamin Netanyahu and Shimon Peres in a 1985 session of the United Nations. She has also been on hand to record the near-forgettable moments in any ordinary day that bring texture and joy to life: The young woman reading “Lolita” on the Metro North train; the on-the-road couple without a permanent address; the porter hauling a trolley full of boxes through a Jerusalem snowstorm; the worshipper at Oświęcim, near Auschwitz, whose portraiture resembles a painting by Vermeer. Geller-Geld, in a recent interview, said her photography is bound together in the unscripted moment when “I find the unique quality of my subject’s goodness.”

Not that Geller-Geld thinks the “ugly” is an illegitimate subject for a photographer. “Simply put, I am not a photographer who looks for shock value in my photos,” she said. “Rather, I seek a subtle unfolding of my subject’s gentle humanity.” 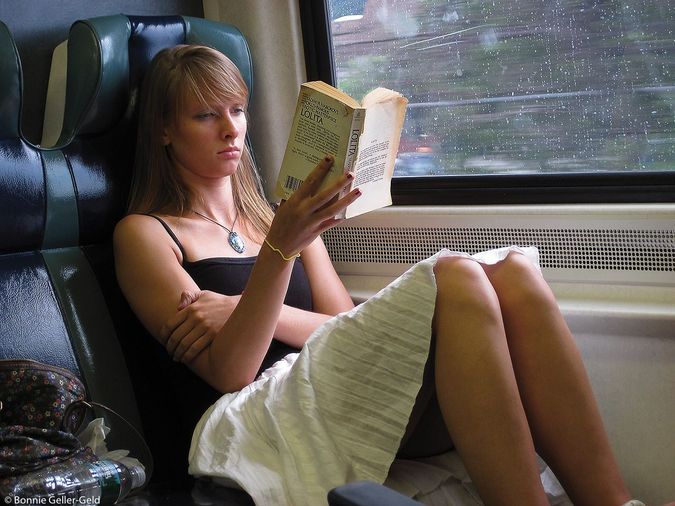 Geller-Geld’s preferred mentors themselves were witness to the drama, simultaneously historic and fleeting, of city streets, battlefields, factory floors, artist studios and concert halls: Walter Rosenblum, whose portfolio includes “D-Day Rescue, Omaha Beach, Normandy, 1944” and “Girl With Polio, Rivington Street, New York, 1938”, helped shape her work. So did Mel Rosenthal, whose camera documented the decline of the South Bronx in the 1970s. Arnold Newman, another influence, famously said, “We do not take pictures with our cameras, but with our hearts and minds.” Indeed, Geller-Geld said that the depth of feeling in Newman’s portraits of Picasso, Stravinsky, Lyndon B. Johnson and hundreds of other public figures of the mid-to-late twentieth century is “stunning.”

Geller-Geld took up photography when she used money given to her after her Hebrew School confirmation to buy a camera. At 15, she looked upon taking pictures as a hobby that eventually would give way to a more conventional profession. But two weeks of law school 15 years down the road convinced her to drop out and enroll in Manhattan’s Germain School of Photography. Upon graduating from the eight-month program, Geller-Geld posted her business card on a bulletin board at CUNY Graduate Center. 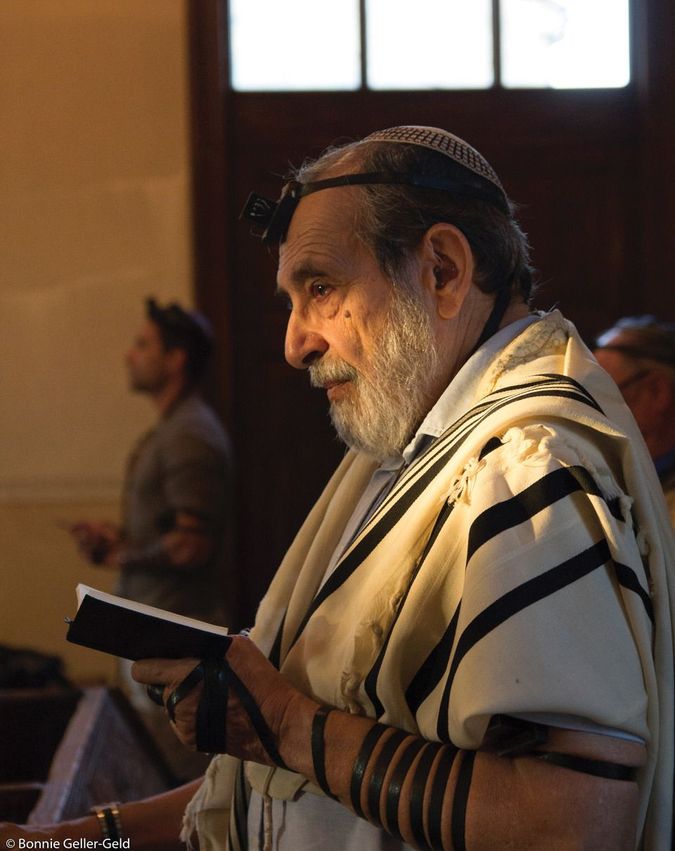 “The Department of Philosophy was having a bicentennial symposium,” Geller-Geld recalled. “Somebody from the department called and gave me my first job.”

Until she could compile a roster of high-profile clients, Geller-Geld did secretarial — and photographic — work at the corporate law firm of Weil, Gotshal & Manges. By the early 1980s, many of New York City’s top-ranking Jewish institutions hired her for events and portraits, including the United Jewish Appeal (UJA), Jewish Theological Seminary, Hadassah, Israel Bonds and the Synagogue Council of America. The city’s cultural institutions followed, Juilliard, Lincoln Center, Channel 13, The New York Times and The New York Post among them.

By her late thirties, Geller-Geld’s professional and personal interests dovetailed. Indeed, she found photographing an awards event for UJA no less satisfying than creating a photographic record of the Catskills town of Tannersville, New York, where Geller-Geld and her husband Isaac — a photographer she met at the Martin Steinberg Center for Jewish Artists — spent their summers. “Unlike other photographers, who experience a divide between their commercial and artistic lives, I loved all my work,” Geller-Geld said. “I always felt I was contributing on a higher level to the Jewish community.” 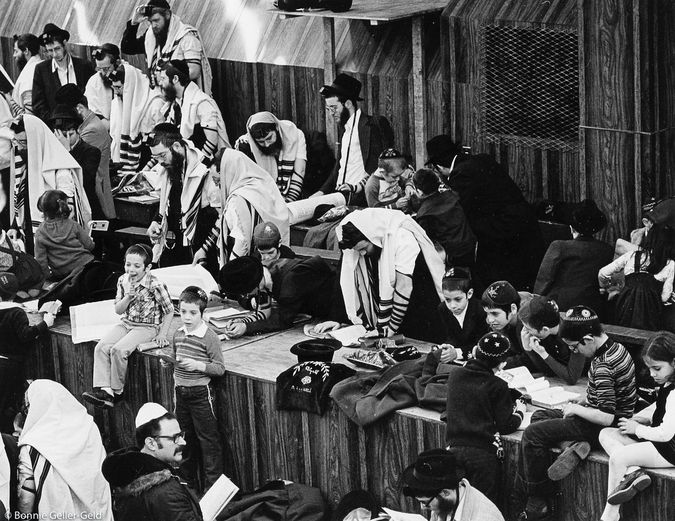 Much of Geller-Geld’s photography has centered on religious communities in New York and Israel. One 1981 black-and-white image homes in on tranquil looking Jewish men and women praying atop the Empire State Building in a birkat hachama, or blessing-of-the-sun ceremony. Another ‘80s image in Crown Heights, Brooklyn, juxtaposes earnest fathers on Purim with their young distractible sons. This same mix of whimsicality and dedication is at work in Geller-Geld’s photographs of ballet dancer Rudolf Nureyev in motion and Zubin Mehta conducting the Israel Philharmonic Orchestra.

After she got married, Geller-Geld discovered an aptitude for teaching, first photography and then English. At this point in her career, she plans on uniting her photographic and literary skills to mount exhibitions and publish her work.

“As a documentary photographer in the tradition of a Mel Rosenthal or a Walter Rosenblum, I always looked for the down-to-earth goodness in people,” Geller-Geld said. “When I captured artists or everyday people at their best, I felt complete.”