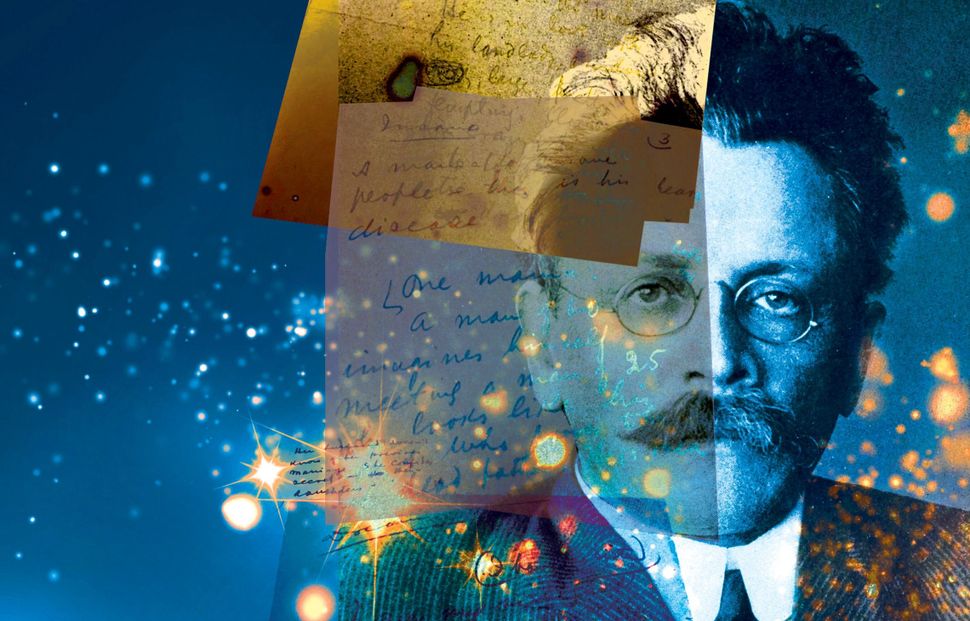 Abraham Cahan’s many kholoymes, his dreams, can be checked off his proverbial bucket list. His life’s work of a Yiddish paper is still going strong 120 years later. His desire to literally have that paper’s presence dominate Manhattan’s Lower East Side, the muse behind our historic building at 175 East Broadway, shapes the neighborhood’s skyline to this day. And his own literary dreams of being a novelist came true with the success of his book “The Rise of David Levinsky.” His short novella, “Yekl and the Imported Bridegroom,” even became a film known as “Hester Street.” Beyond his wildest dreams, one could say.

But what happened when he was no longer hunched over lines of text, when arguments with composers, writers, editors and capitalist owners were done for the day? What about the magic hour when not only the paper was put to bed, but our esteemed founding editor-in-chief himself was at rest?

Seemingly asleep deep within his own archival papers, housed at the YIVO Institute for Jewish Research, is a humble folder simply labeled “Dreams” in Cahan’s own handwriting. So, happy 120th, Forward. Here, published for the first time, is a glimpse into the furthest reaches of the man who dreamed us up. 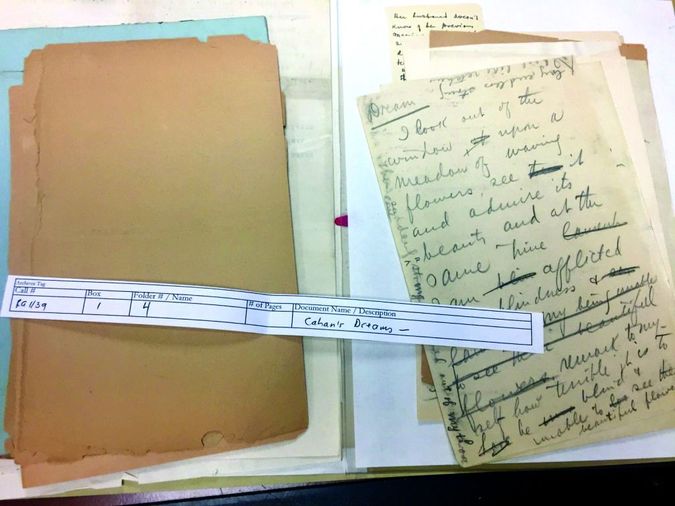 Cahan recorded his memories of his subconscious in English, unedited, in pencil, on unassuming notepad pages. One imagines it lying on his bedside table, perhaps next to a cup of bicarb, consumed after a long day at the Forverts. Cahan removes his glasses and places them there before his head hits a couple of down-filled pillows, causing a few stray feathers to burst their seams and gently rise just above his head.

Our founder then slides into a dreamland that reads mostly like a series of koshmarn, nightmares, on repeat shuffle. It’s Cahan’s world, and you’re welcome to visit where mad fiddlers play passersby into extreme melancholia. You may find yourself, in the best-case scenario, in a field of flowers — only to be struck blind. Then a friend points out that you’re naked in public, and you spend the rest of that dream trying to convince your friend that you are in fact fully clothed. You’ve known another friend for ages, when suddenly his familiar features morph into those of the president (Theodore Roosevelt at the time). Your feet melt and in another series of fantasies your subconscious lets you fly, and it’s so simple, but why will nobody believe you?

A 2-year-old holds forth on the reasons for war and you are deemed insane. Poets are decadent liars and you think up an audible dictionary. Even your hot dreams are all manner of chaos filled with un-kissable kisses, and a sheet of punishing waters — resembling Niagara Falls — separates your from your lover. You dream of a woman you know who is now a man, you dream yourself to be a woman yet are deemed homely. Why can’t you be beautiful you ask in your sweet sleep? A sex-obsessed genius draws crowds of women to his concerts but his music is weird and replete with erotic sighs, his improvisation you deem obscene.

On a good night for Cahan in slumberland, time goes backward and a girl tries to teach a crowd the simplest of tunes but they don’t get it. They sigh, they wring their hands in despair, for the tune is the meaning of life.

1) I look out of the window upon a meadow of waving flowers, see it and admire its beauty and at the same time I am afflicted with blindness and remark to myself how terrible it is to be blind and unable to see these beautiful flowers. Then suddenly a string is pulled out of my throat. A long endless string I feel like reattaching.

2) It came where people live and not from tomorrow but to yesterday. Time goes backward.

3) The musicless town and the town that has music but is out of tune. Cats whining, mice gnawing.

5) Her husband doesn’t know of her previous marriage. She confides the secret to their daughters and they develop a mission: to tell their father and make him accept it like a “real sport.” 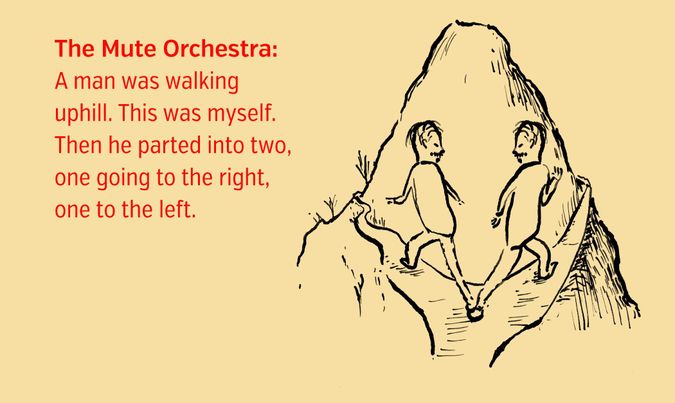 6) I walk and I am solid as usual, but my feet are like soft wax, and they get softer and softer. “Why, they’re melting,“ I say, in despair as I hurry on.

7) The dumb fiddler, dumb voices. The air in revolt. Won’t vibrate until the Prophet arrives, twanging his guitar. When one hears voices and instruments.

8) I get assignment about death of fiddler. I go, investigate, and neighbors pooh-pooh, laugh. I investigate further his talks, types. Story.

9) The man imagined himself a virtuoso, but was very hidden but really a poet. Talks of their effect of his violin on the masses. He is in love with his landlady, a widow, large, pretty, tempting. She calls him crazy and this urges him to tell his poetic lies.

10) He and she happy to meet, rush to embrace and kiss but can’t touch. Niagara sheet of water between them. Thrilled with their un-kissed kiss. Un-kissed kisses-ss-sss….

The Sex-Ridden Champion: A critic presented him a sex-ridden genius that got about bringing crowds of women to his concerts.

His weird music. Sobs of sex agony, sobs of sex joy as a girlish-looking man with manly shoulders and hair.

His love affairs revealed in his improvisations, some of them quite obscene.

12) I found myself in the house of a friend away from my home, undressed. My friend calls my attention and I am surprised I had not noticed it. We sit talking and later on I notice I am dressed and call my friend’s attention to the fact that am not undressed at all. 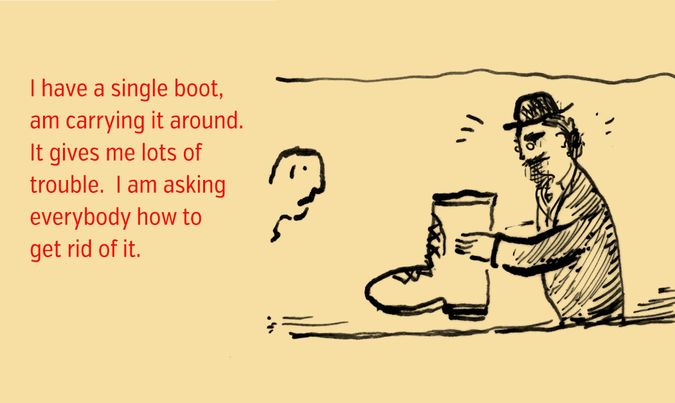 14) He dreamed he was insane, his insanity consisted of imagining himself standing in an open room and crying to people outside to open it.

15) The Insane Asylum: A Russian prince, highly educated and idealist, a dreamer, a decadent poet founds an (he calls it orbocheshuncha) asylum for mad-men with queer illusions (“dreams”).

Ultimately he turns out to be insane himself.

A man of 60 imagines himself meeting a man of 25 who looks like his son and who proves to be his dead father.

l Insane p.3: The man who hears three, four or even more people talk at once, like an orchestra conductor listening to many instruments.

(Ten people reading ten books and understanding them all.) 17) I talk to a laughing, smiling man about Votivekirche. He says not Votive but Motivekirche, and I point at the actual church in Vienna and say see, it is Votivekirche.

18) A prisoner once said to the hangman: “What have I done to you that you should strangle me with this rope?” He said it so serenely with a plea so free from terror so full of quiet sadness that the hangman was cut to the quick. He was not brave enough, however, to drop the job. He hanged the man and then hanged himself.”

19) She had been under a nervous strain all day and on going home she just missed an elevated train (the guard was closing the gates when she had just paid her fare) at night. She dreamed she is taking a train for another city, and although there is plenty of time she knows she won’t catch it. She feels a nervous strain. She sees the precious moments melting. Another moment, another, another. Her heart throbbing. Zip! The train is off!

20) Realities of a Madman I remember myself as a boy of 18 distinctly because I was in love then and would go to the mirror a thousand times a day. Now at 42 I walk along Madison Avenue and coming from the opposite direction I see myself, that youth of 18.

21) On board a big modern steamer. Queer frame of mind. A hotel, a great large parlor, tea, music, dancing. Newspaper telegrams handed and yet…. You are not your own self. A dream.

22) I’m riding a bicycle. I wave my arms and this is the force that propels the wheels. My arms act as oars, pushing off the air. It is all so simple. How stupid people are, not to understand it! I am the author of a great invention and yet it’s so simple!

23) I sit at a table in restaurant with mirror in front of me, but instead of myself my reflection is the face and figure of a homely woman. And it hurts to have myself a homely woman. Why not a pretty one?

24) I am flying smoothly, easily though not high. I am convinced it is not a dream. Without the aid of an aeroplane I seem to have flown every night for many weeks. 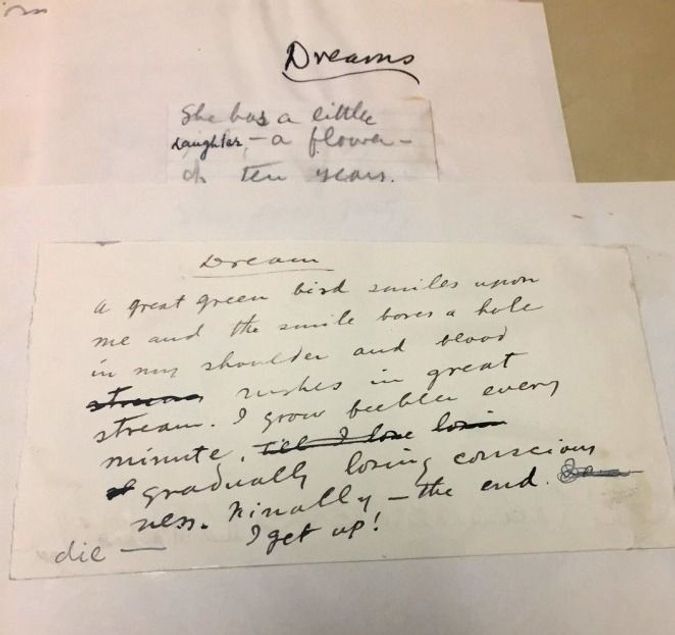 Isn’t it strange that people should consider it impossible? It seems such a simple thing to do.

25) Saw my father and mother before their wedding. They are in love. My mother is beautiful; my father is courting her, kidding her. I say to myself: “It is not nice for a son to watch a love scene between your father and mother.” Yet I attend the wedding and I am so sad!

26) A great green bird smiles upon me and the smile bores a hole in my shoulder and blood rushes in great stream. I grow feebler every minute. Gradually losing consciousness. Finally — the end. Die — I get up! 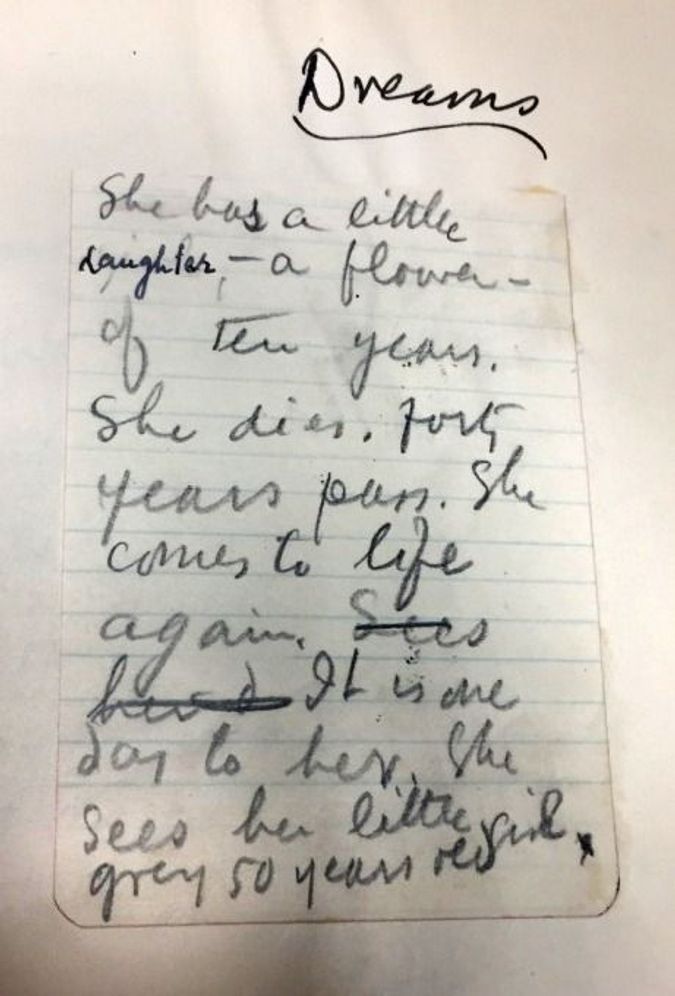 28) A girl sings a simple tune in two bars and a crowd is really striving to sing it. It is the simplest thing in the world, yet they can’t get the air. They sigh; they wring their hands in despair for the tune is the meaning of life.

29) He told his sister that his friend had made a queer impression on him that morning: “He looked as usual but as I looked at him his face gradually changed, as though quite another face were emerging from it till his face disappeared and gave way to the face of Theodore Roosevelt.

30) The mad fiddler. He plays from his window when the crowds surge by. He plays heartbreaking melodies and each passerby catches the contagion and passes on with his pang. The fiddler knows that his fiddle scatters music-pangs; “There they spread all over the district with my pangs right and left, up and down. It makes better men of them.”

31) I met a man in Berlin whose father was a great pianist. The man I met was also a great pianist. He married and the first child that was born to him, a boy, played the piano when he was 1 year old, although nobody ever taught him to do it. It was a case of hereditary instinct. Like a bee born with the instinct of making wax and honey. 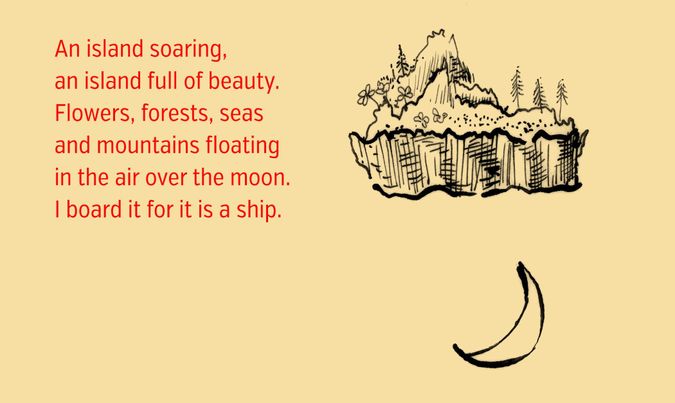