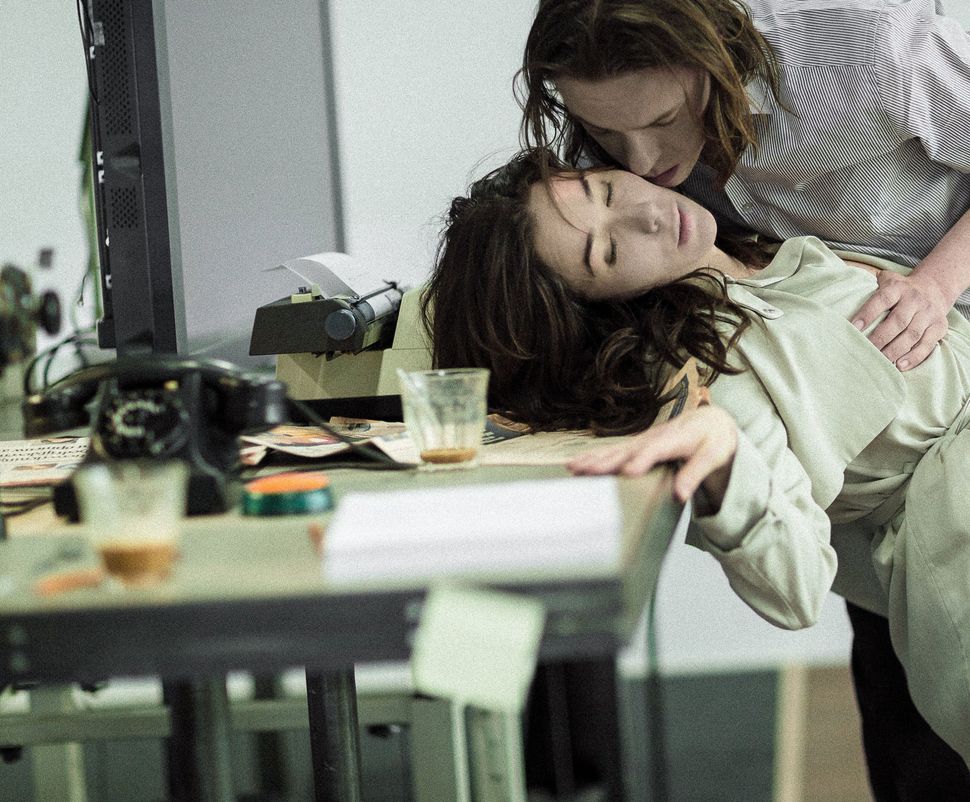 An excellent way to win the scorn of your coworkers, I have learned over the past month, is to display Ayn Rand’s “The Fountainhead” and “Atlas Shrugged” on your desk. (Yes, dear colleagues, Rand was Jewish, born as Alisa Rosenbaum in pre-revolutionary Russia. No, dear colleagues, I am not turning into an individualist psychopath, or worse, beginning to agree with Paul Ryan.)

Yet in the eyes of Ivo van Hove, the Belgian director who has become one of Europe and America’s most revered theatrical auteurs, Rand’s work deserves a reconsideration. 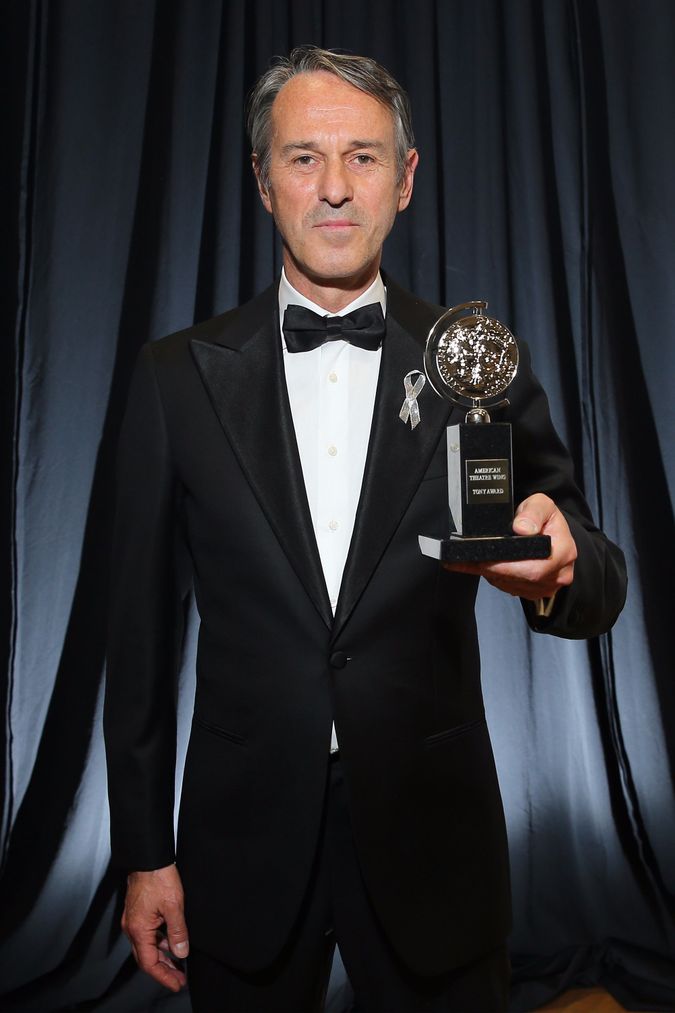 Ivo van Hove poses with his 2016 Tony Award for Best Direction of a Play for “A View From the Bridge.” Image by Jemal Countess/Getty Images

Van Hove, whose recent productions in New York City include acclaimed Broadway revivals of Arthur Miller’s “A View From the Bridge” and “The Crucible,” Tony Kushner’s “Angels in America” at BAM, and David Bowie and Edna Walsh’s musical “Lazarus” at New York Theatre Workshop, adapted “The Fountainhead” for the stage in 2014. Toneelgroep Amsterdam, the Netherlands-based group of which he is artistic director, has since performed it France, Seoul and Taipei. On November 28, Toneelgroep will open “The Fountainhead” at BAM’s Next Wave Festival; it will be the play’s premiere in the United States.

Van Hove knows it’s an interesting political moment, to put it gently, at which to debut the play in the country most influenced by Rand’s politics. (He could not have predicted that as he brought the gargantuan production to New York, the central issue in front of Congress would be that of a tax reform effort broadly attempting benefits to wealthy individuals and big businesses and jeopardizing items of communal good, both endeavors with Randian overtones.) In advance of the play’s opening, we spoke over Skype about how his adaptation differs from Rand’s book and why her ideas deserve a second look. Read excerpts of that conversation, below.

Talya Zax: Your adaptation of “The Fountainhead” premiered in 2014. How has the production, and your understanding of its meaning and relevance, changed since then?

Ivo van Hove: The relevance is even more urgent now. I call “The Fountainhead” always a war of ideas. The two opposite ideas, of course, are between Howard Roark, who’s an idealist who doesn’t want to give in to his clients — he wants to make the building the way he thinks it should be made, he’s a modernist — [and] on the other side there’s Peter Keating, his friend, who thinks that architecture is there to serve the people. Roark thinks [he] decides how people should live, and he designs it.

It’s two opposite ways of thinking in life: Somebody who is able to make compromises, and the other one who thinks “No, I am the truth, I have the truth on my side, so follow me.” That’s an interesting idea, in these times, to be confronted with in the theater.

A deep thinking has developed in this novel: People should take care of themselves; if you cannot take care of yourself that’s a pity; you should work a little bit harder, or do your best a little bit more. It’s a very complicated novel, intellectually challenging, but also challenging on an emotional level. Do we want a social society, or do we want a society of individuals?

This will be the premiere of “The Fountainhead” in the United States. Do you think it’s significant that the play is debuting here at this particular political moment?

I’m not American, [but] I spend a lot of time, as you know, in New York. New York is not America. It’s quite a different place.

I’m very aware of the political context, the social context. I wasn’t when I started the project. I think the theater’s not there to present what’s good and evil. You should make your own choice between good and evil. I think theater should be subversive; it should present subversive ideas.

Every year, 100,000 people go to Madrid to look at [Pablo Picasso’s] “Guernica.” Why do people go to see that? The arts are there to be confronted by our deepest anxieties and our biggest desires, and the utopias and the lost paradises. And that’s what Ayn Rand does, I think, in her novel. She presents us with her wishful thinking, which for other people is perhaps the most the most horrific thing in life.

When you directed Tony Kushner’s “Angels in America” at BAM, you mentioned in a video that New York and United States pretend to be the free world, but do so while excluding people who don’t fit the country’s mainstream idea of itself. You’ve directed a spate of plays, recently, that comment on the perverse ideologies and inequalities that have historically characterized the United States, among them “A View From the Bridge,” “The Crucible” and “Angels in America.” How does “The Fountainhead” fit into that oeuvre, and how does it reflect differently on the country in which it’s set than the others?

“The Fountainhead” fits, of course, in my American stories. It’s also part of America, eh? Taxes in America are much lower than in Europe, so the rich become richer and the poor don’t have a chance to become richer. [In Europe] we have a society that takes a bit more care of each other, although that is starting to change.

As a citizen, I want to take care of people that don’t have the luck that I’ve had in my life. There are a lot of young directors who make good productions that don’t get the chance to make another one. I worked hard for it, but not only because you work hard will you will be successful. I think American society is harder in that way.

It’s deeply rooted in the DNA of America. It’s the same about health insurance, while in Europe we are born to be aware that we have to pay also for the people that don’t have so much money.

In a 2014 interview, you said you wanted to adapt “The Fountainhead” “without having to deal with its political context.” Do you feel you succeeded in doing so?

I did it the way I also direct “Macbeth” or other plays that are very explosive in what they tell. I’m not afraid of that. I think that’s my job. That’s why I chose to make theater. In that way I’m Howard Roark. I’m not going to give in.

For me it’s the same as Wagner. We all direct Wagner these ways. There was a time that it was forbidden to do Wagner because he was associated with the Nazi regime.

Censorship should not exist in art. Medea kills her own children! Every year millions of people go to see a play of “Medea.” Why do we go there? Macbeth kills people. Richard III is a killer. Art is there to show us what’s deep down in every human being. We all have violent instincts. We all have our frustrations, our anger. Arts can ventilate that. It’s important for a society, this ventilation of negative forces of ourselves. Better than killing people on the street.

In the same interview, you posited “The Fountainhead” as similar in moral and intellectual complexity to “Macbeth,” as you just mentioned, and “Medea.” Can you elaborate on that comparison for me?

For me it’s a very complex work. Ayn Rand is a character and a figure and an author, not a nice person, but I think she threw at us things to really think about. I got the question, in every country that we played “The Fountainhead:” “Ivo, what’s your position now?” As an artist I want to be Howard Roark, I want to be an idealist, I don’t want to please my audience, I want to challenge them. As a citizen I tend not to be like Howard Roark, because he says very clearly in this production, “Why should I pay taxes to take care of people who don’t take care of themselves?”

I have a very divided opinion about the characters in “The Fountainhead.” I tried to bring onstage the ambivalence of this work. I know Ayn Rand supports Howard Roark on all levels. I don’t do that. I try to present the values of both. You can make your own choices. Theater’s not there to be a teacher.

How does Rand’s text fit with your artistic ideas about theatricality? How does it challenge them?

It’s one of these really big large-scale productions like “Kings of War” where we use a mix of acting with live video, pre-recorded video and music onstage. On a theatrical level, it was a huge challenge to bring this story in a truthful way to the stage. A lot of my friends said when they were 18 they were devouring “The Fountainhead.” There [are] great ideas there. Things that really can inspire you. It’s not negative, I think.

Are you familiar with any of Ayn Rand’s other work? How do you understand your “Fountainhead” as contributing to, or challenging, what you see as her legacy?

“Atlas Shrugged” [presents] the same challenge. It challenges one to think, “Is this the world that I want, or is there something else I want?” She creates great characters, larger than life, people that don’t take things for granted, try to bring things together, have great big ideas, big plans, are not afraid of failing. It’s attractive and sometimes horrific at the same time.