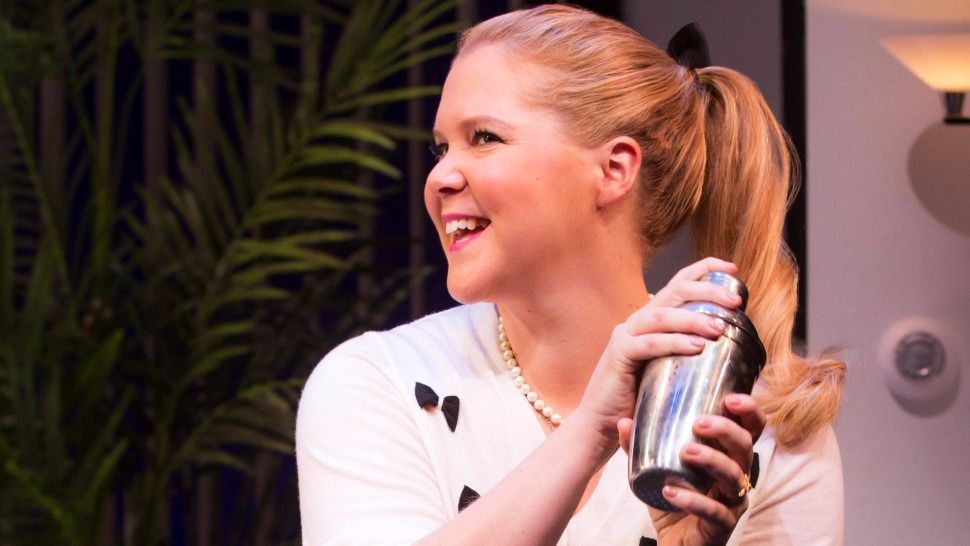 Amy Schumer, in her Broadway debut, proves herself a competent stage actress, an unsurprisingly gifted physical comedian, and, remarkably, a formidable shiska goddess. It’s just a shame the vehicle bringing her here, Steve Martin’s “Meteor Shower,” is quite so stubbornly earthbound.

Martin’s latest— the multitalented onetime “Saturday Night Live” star previously wrote the absurdist comedy “Picasso at the Lapine Agile” and contributed the script and co-wrote the lyrics to the charming, tuneful “Bright Star” two seasons ago — is another absurdist comedy, this one, it seems, a meditation on marriage. It features a great cast, a nifty set, and boffo ticket sales. But despite some potentially interesting playwriting tricks — perspectives shift and the action is replayed — “Meteor Shower,” now playing at the Booth Theater, mostly just crashes and burns.

Schumer and the talented, menschlich theater actor Jeremy Shamos play the goofy husband and wife Corky and Norm. (Corky!) They seem happy and smitten, and clearly they’ve gone through a lot of therapy to get there. They live in Ojai, the luxuriously New Agey village east of Santa Barbara. A meteor shower is coming, and a guy Norm once played tennis with has invited himself out to the desert to watch the celestial show.

Keegan-Michael Key, the “Key & Peele” alum, also making his Broadway debut, plays Gerald, who is “hard to describe, kind of two people,” as Norm says. He’s a big shot, or at least likes to think he’s one, who’s sure to share his opinions on everything. His wife, Laura, is Laura Benanti, playing this elegant cipher at a perhaps near-Melania level. This pair is obnoxious, over-the-top, and offensive, so much so, we eventually learn, because they’ve decided before arriving that they want to break up Corky and Norm’s coochy-cooily loving relationship.

What is not at all explained is why. Why has nice Norm invited these awful people for the evening? Why are these awful people dedicated to destroying them? What is it that drew these awful people to each other, or made them want to be complicit with one another in this plan? There’s a late suggestion that Gerald and Laura aren’t quite what they seem, that there’s something a bit more metaphysical going on here, but by that point you’ve already stopped trying to track the motivations, or care much about them.

But what saves the evening — and at 80 minutes, it’s less of an evening than it is an afternoon nap — are the performances.

Schumer is a perky delight as Corky, full of therapized aphorisms in her blond high pony. She’s comfortable on stage, charismatic, and committed to her bits. Key is in fine form, an attention-sucking ham, dominating by force of will and seduced by his own exuberance. Jeremy Shamos is excellent, as always, though his shambling nature seems inherently outmatched by the other players. And, more than anything, “Meteor Shower” serves as a reminder of Benanti’s greatness — she is funny, she is both delicate and commanding, she cannot help but hold your attention.

Pro that Benanti is, she nevertheless also can’t quite keep from breaking, so amused was she by Schumer’s deeply amusing performance. Which only underscored the fact that this is a mere “SNL” sketch, stretched as a long as it can.

Jesse Oxfeld has written about theater for Town & Country and New York Magazine.