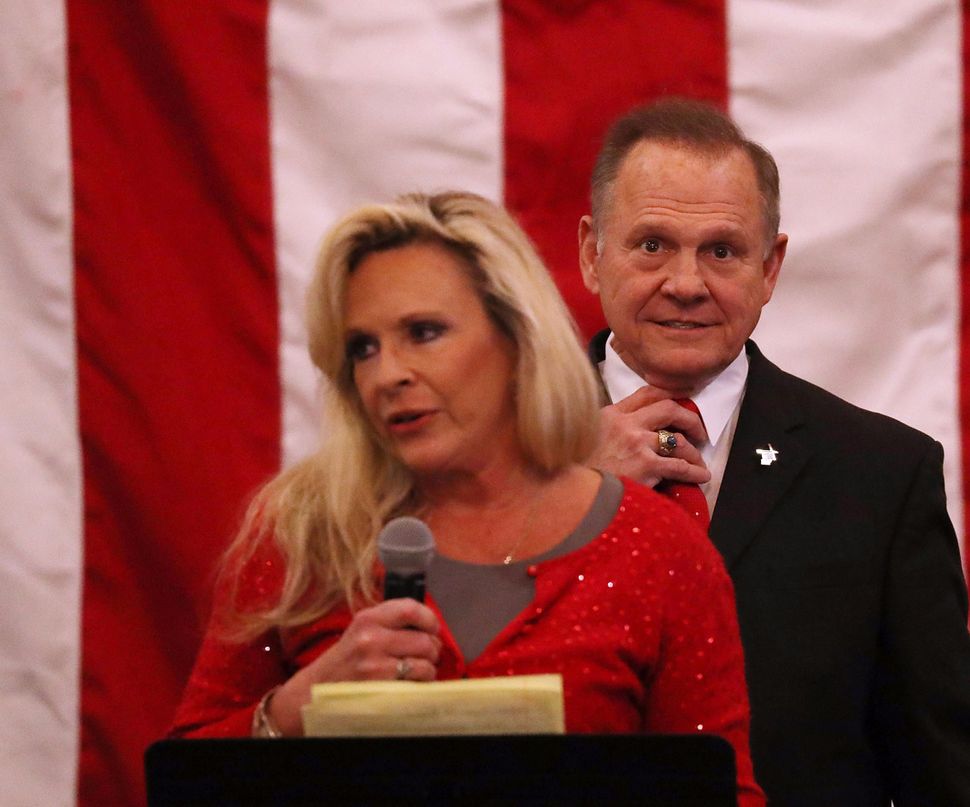 This may be the first time in American history when intonation has become a political issue. Of course, 2017 has been a year so chock full of disturbing firsts that it might be hard to pay attention to an extra syllable uttered by a losing candidate’s wife, but in this case, a little bit of well-placed Southern twang might just reveal a world-view.

The candidacy of Roy Moore for U.S. Senator in Alabama had many chilling aspects that made us want to cover our ears.

Then there’s the strange Jewish element that appeared in the final days of the campaign.

Moore’s wife mentioning that “fake news will tell you that we don’t care for Jews” and that “one of our attorneys is a Jew” sent shudders down some observers’ backs, and set Twitter aflame.

But I’d argue that the scariest part is pronunciation. Jee-ew. With two syllables.

The word Jews was uttered by Moore’s wife for so long that it can’t be missed. And at last count, that video clip was viewed 3.95 million times.

In response, Joan Walsh, national correspondent for The Nation, tweeted:

Yashar Ali, of New York and The Huffington Post, tweeted that he had watched that much-viewed clip twenty times. If you haven’t seen it, tune in here:

And we surely have seen and heard this before, many more than twenty times. For centuries, it wasn’t just the word for Jew that was the problem — yid, Jude, juif — but how it was pronounced, which is, of course, an indicator of how it is perceived. Consider the phrase yiddishe kop — literally a Jewish head, and meaning “a Jewish mind” in Yiddish; that’s positive.

He’s a yid. Well, not that appealing, when uttered in a certain tone. A derisive tone. The same tone familiar to Russian speakers who detect the sneer in yevrai.

Traveling through Germany in 1998, I remember noticing the slow, extra syllable in juuuuden, in small towns, and in the neighborhood my grandfather grew up in in Germany. Juden or Juuuuuden indicates something, as, of course, does Judenrein, or Jew-free.

So does “Jew” or Jeeeeewwww in an Alabama drawl that emphasizes us against them.

That smile and that intonation, are also, frankly, nods to a certain strain of Christianity. Forget moral values: it’s “Christian values” that matter, and more specifically, an interpretation of Christian values that puts views on abortion over care for the poor or care, for well, underage girls — as long as they’re not pregnant.

After all, Jews see abortion — that critical issue for so many evangelical voters — differently. It comes down to a definition of life, arguably the most important word of all. The word Jew, with two syllables, emphasizes what many of us know but don’t want to discuss: that Judeo-Christian values is a convenient term that paints over major departures in ideas, like when life begins.

And for all these reasons, the word Jew is a symbol for the ultimate not-us.

Jeeewww, with two syllables, is a nod to America’s emboldened current insiders. There’s the kind of Christian that should win elections — hint, hint, nod, nod, pro-life — and there’s the rest.

So even if it hurts your ears, crank up the volume on Moore’s wife’s comments. Listen two times, or twenty times, as Yashar Ali did. Look that smile in the eye. And consider what that intonation feels like, in your gut.

Of course, it’s easy to celebrate Democratic victory in Alabama, especially in a political year as dark as this one. Last night, after all, was a night when Benjy Sarlin of NBC News tweeted, in all caps: “TO ALL MY JEWISH FRIENDS, HAPPY HANNUKAH” — Doug Jones, twisting the knife.

But don’t let the combination of holiday joy and election relief erase the meaning of intonation, and the ugly hint in an extra syllable.