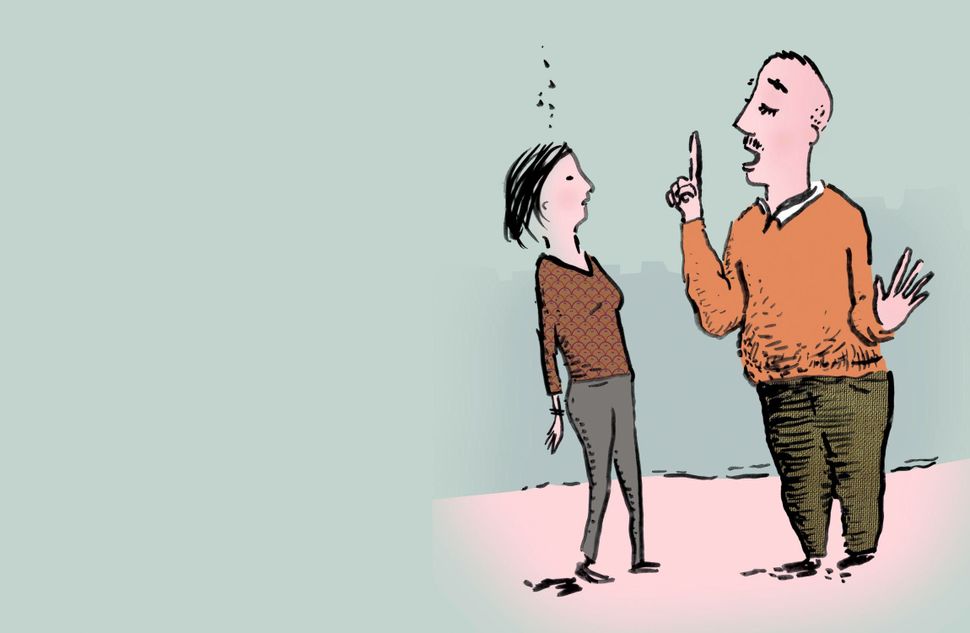 The Israeli version of mansplaining combines the ancient and the contemporary. Inside the word hasgvara is the word gever, or man, which happens to be one of several words for “man” that appear in the Torah. [It is always interesting to consider the variety of terms the Torah has for man, ranging from adam, which can also mean human, to ish, or man, and to wonder why there are so many options. Whatever the reason, one result of the multiplicity of man-terms is that there are many possibilities when it comes to constructing any word or phrase that involves men.] And if hasgvara seems familiar, it is because it sounds a lot like the word hasbara, or explanation, which is what the Israeli government calls its effort to explain Israel, and especially Israel’s challenging security situation, to the world.

Hasgvara is a combination of the Hebrew words for “man” and “explanation” — and it is also an imitation and a translation of the English term “mansplaining” in both its structure and its meaning. It’s a mashed-up term, and is not formed using the traditional trilateral root system that Hebrew is constructed from—but it certainly is memorable. According to Hebrew Wikipedia, hasgvara was first used in Hebrew by feminist blogger Shiri Eisner in 2011, and made its first appearance in Haaretz in 2015.

I first encountered hasgvara on Twitter, and not in the natural habitat of Israel’s streets. So far, I have only read the word, and have never heard it used in conversation. My introduction to the term came when an alert, language-loving relative of mine sent along this delicious tweet from Rabbi Sari Laufer:

“I just learned that there is a #Hebrew portmanteau for ‘mansplaining’ and it feels like a great day. Lehasgvir or hasgvara in case you’re wondering”

My relative was clearly not the only person who saw hasgvara as notable news.

I soon learned that mansplaining, in the infinitive form at least, has gone international. Twitter taught me that the infinitive lehasgvir in Hebrew has a cousin in mecspliquer in French, using a similar combination of the word mec for guy or man and the verb expliquer or to explain. The French version has the added advantage of sounding a lot like m’expliquer, or explaining to me.

And mansplaining, it turns out, is herrklären in German and hrútskýra in Icelandic.

I wanted to know how popular the word hasgvara is in Israel, and I was eager to hear it used in a sentence. Not long after I recovered from jet lag, I asked three young men, all twentysomething Tel Aviv residents — one with a hipster beard, two without, in case visuals matter—if they had heard of the word hasgvara.

All three said some combination of “wow!” and “I never knew that was a word!”

And all smiled slyly.

The word met their approval, but it wasn’t part of their vocabulary.

And one of the three asked me to use it in a sentence.

Next I wanted a female take, so I visited Meira, who owns a cramped vintage jewelry shop in Tel Aviv where I once purchased a very dramatic silver bracelet. I was happy for an excuse to visit her again.

At first Meira misheard me, and thought I said hagvara.

“That’s confusing,” she said. “In Hebrew words are usually written without vowels, and someone might think it’s ”hagbara” or raising the volume.

In my experience, mansplaining often comes at high volume, so I didn’t see this as a problem. Besides, I tried to explain, the word for mansplaining is hasgvara, with a samekh, and so there is no way a reader can confuse it with hagbara, or raising the volume.

But my efforts to clarify the spelling of the Hebrew take on mansplaining while seeing if another vintage jewelry purchase was in my future were quickly drowned out, as if on cue, by an irate cabdriver who parked his cab in busy traffic, got out in a huff, and yelled extremely explicit driving instructions as well as what-I-think-you-should-do-with-yourself comments at the woman driver in front of him.

This was mansplaining, sure, but also mansplaining at high volume. And unacceptable, in any case.

Like many of us, I have thought hard about what is unacceptable, especially in the wake of the #MeToo movement, and have asked myself how language does or does not help define degrees of unacceptability in society. In Hebrew, hatrada minit is the term for sexual harassment, with hatrada for harassment and minit for sexual. But hatrada, used alone, can be used in a wide variety of contexts, and for many forms of “harassment” and “disturbance,” from mild to major.

I was amused to find, for example, that my cheap travel cell phone uses the word *hatrada for alarm, so apparently someone in Israel considers a wake-up alarm to be a form of harassment.

A loud alarm, of course, is not nearly as disturbing as what certain prominent American news broadcasters are accused of doing to their interns—and yet, from a linguistic perspective, both an alarm and a sexual demand are forms of hatrada.

But there is also aveira minit—sexual transgression, and the term draws an obvious moral and legal line. The word aveira implies a line that should not be crossed; the infinitive line for crossing a line is la’avor, and transgression literally means crossing a boundary.

In English, too, the origin of transgression is the Latin term for stepping across.

Of course, sometimes there are no flashing signs indicating a moral border, no bullhorn calling out transgression ahead! Sometimes all we encounter is an absence of morality, a complete dearth of decent people. That’s one reason why I love the famous verse from Pirkei Avot, or Ethics of the Fathers, (2:5) which states: b’makom she’ayn anashim, hishtadel l’hiyot ish — which in the Chabad online translation reads “In a place where there are no men, strive to be a man.”

The verse depicts the ish or man — and it should be emphasized, the lone man, what Rabbi Joseph B. Soloveitchik, or the Rav, might have called the lonely man of faith — in the best sense of the word: as a moral force.

That verse has no need for hasbara, or explanation, or hasgvara, or mansplaining, and certainly not hagbara, or raising the volume. It captures the type of decency we need now, as we bid goodbye to 2017 and look ahead to an uncertain political landscape in 2018 and beyond. It calls for a personal moral code that we carry with us, a decency that requires striving, a code of conduct that is most necessary when we find ourselves in a wilderness best described as an emptiness-of-man — and it asks us not to accept what others consider acceptable.