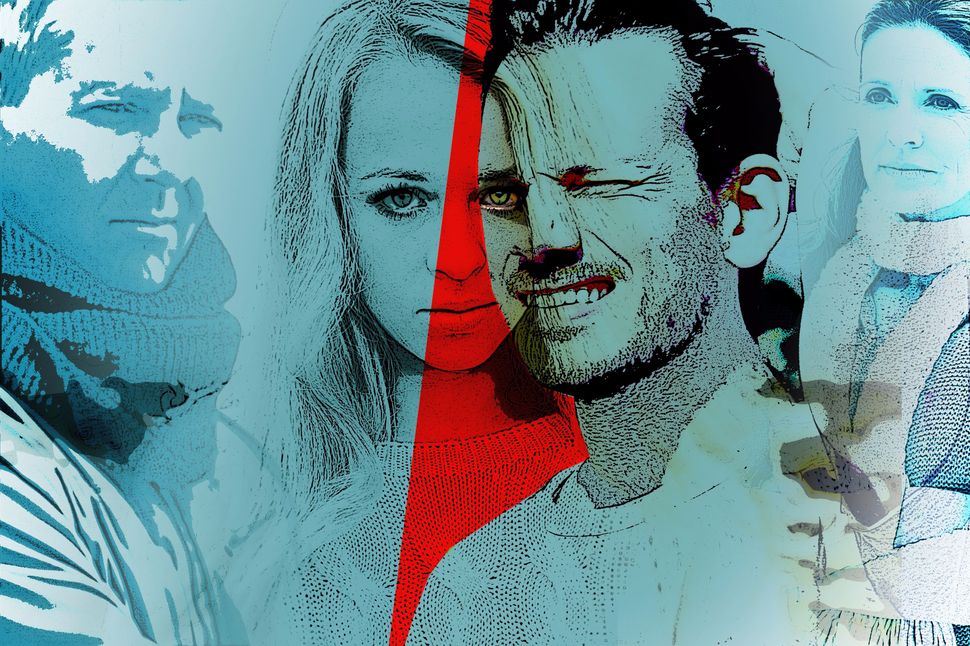 Meet Mark and Karen Breakstone. They got married a little late in life: “Karen was nearly 40 and had given up on finding someone as good as her father.” Some friends introduced her to Mark, who, at first has only “his potential to be rich” to recommend him, but turns out to be funny and sweet and sensitive (he had a sister who died, of an eating disorder, at seventeen, which makes women a source of permanent confusion and some alienation for him). And Mark thought Karen was beautiful, and he loved that she didn’t have fancy social aspirations, that she was comfortable with but not grasping about money, “as if she were born with it and had nothing to prove,” loved that she has a “natural inclination toward privacy and thus private satisfaction.” The sex was good too.

Meet Robert Klasky, “born in Newark, New Jersey… in the public hospital” a decade before Mark and Karen’s first date. Bobby came into the world with some disadvantages: no known father, for one — “his father could have been any number of people who had Bobby’s mousy brown hair and blue eyes” — and also an addict mother, who consumed mostly beer during her pregnancy, and who consumed mostly heroin after her son was born. Left to his own devices when he was not used as a parlor trick and/or punching bag by his mother’s companions, Bobby soon discovered “his own power when he saw a bird trapped inside the window air conditioner and turned it on and watched in awe as the animal battered by the fan until blood sprayed out the vent.”

Meet Heather Breakstone, daughter of Mark and Karen, “so beautiful that…she would inevitably become the center of attention” wherever she went, her beauty eclipsed only by her charm and intelligence and, “most notably, a complex empathy that could be profound.”

Meet Matthew Weiner, though of course chances are you’ve already met him and know him well. The Jewish creator of “Mad Men,” Weiner is now the author of “Heather, the Totality,” a slim novel — you could easily read it in a single sitting — that brings the Breakstones and Bobby Klasky together. On the surface, it is a story driven by the tension and suspense generated by intimations that the family and the drifter will collide, that tragedy is inevitable. But the book is also a larger exploration of obsession, and not only that of a dangerous man with a lovely girl. Heather eclipses — get it? — and blots out everything around her, and her parents are, finally, also taken — perilously so — with her.

Mark and Karen’s obsession with their daughter comes to make sense in the larger context of their lives. For Karen, Heather is a chance to assert herself in a way she has never before been able to do. Now, as the mother of an impossibly wonderful daughter, she is able to feel accomplished, fulfilled, realized. Mark, in the meantime, has failed to live up to that vaunted “potential to be rich,” at least by his own standards. Passed over for a promotion, despite “the enviable skill of recognizing when an asset was distressed,” Mark wants more: to be in magazines for acts of philanthropy, to be the sort of guy who can afford the penthouse, not have to settle for one floor below. Heather seems like the one aspect of his life that is not a compromise, not second-best in any way.

As is perhaps inevitably the case when two people are in possession of one good thing, Mark and Karen come to resent each other, to aspire to an ever greater share of Heather’s affections, to covet her attention and jealously hoard it. Something, we understand, may be rotten in the state of Breakstone.

Something is definitely rotten in Bobby Klansky. While Mark and Karen and Heather enjoy a vacation in Orlando, where still more people are given a chance to marvel at Heather’s perfection, Bobby assaults a neighborhood girl and spends three years in prison, where he embraces his vision of himself as “so damn smart that people bored him and he was a bright light among them with all the power in heaven, and he could rape them and kill them anytime he wanted because that’s why they were on earth.”

The ultimate prize Bobby believes he could and should have is of course Heather, and his conviction that he and Heather are fated to collide preoccupies the second half of the book. How this comes to be — how a psychopath comes in contact with a privileged, pampered beauty on Park Avenue — has to do, of all things, with household repairs. (Bobby is part of a crew working a construction job on the apartment above the Breakstones’.) For Mark, however, it has to do with his own failure to make enough money to buy that penthouse, to climb higher.

For as much as “Heather” is nominally a thriller, its interest is not to my mind in whether Bobby will get to Heather. (A sort of spoiler: the novel turns on a twist, though if you know Weiner’s work, the unexpected conclusion actually turns out to be a predictable one.) Nor is the book finally all that concerned with Bobby’s antisocial disorder and behavior; it is more invested in foregrounding the ways in which material comfort never seems quite comforting enough, the ways in which we are never satisfied and always want more: more money, more property, more and more and more love. Is there something wrong with Bobby for expecting more than what he has? Is there something wrong with Bobby for being ready to pillage and kill to get more? Well, these aren’t the real questions. Doesn’t everyone — including those with more than enough, especially those with more than enough — want more? Who isn’t ready to kill?

Weiner, who, as every profile of him notes, studied literature and poetry at Wesleyan and famously incorporated literary references like so many product placements in “Mad Men,” makes his literary debut a kind of taut drama in five acts. (Yes, there are five parts in a work of 144 pages.)

In an interview with the Times last year, Weiner cited something he overheard on a walk as the novel’s inception: a teenage girl in a tense conversation with a man near a building under construction. But “Heather, the Totality” is not really a work about a young woman in danger from a menacing outsider. The novel is far more interesting as an exploration of the danger than lurks within the apartment just below the penthouse.