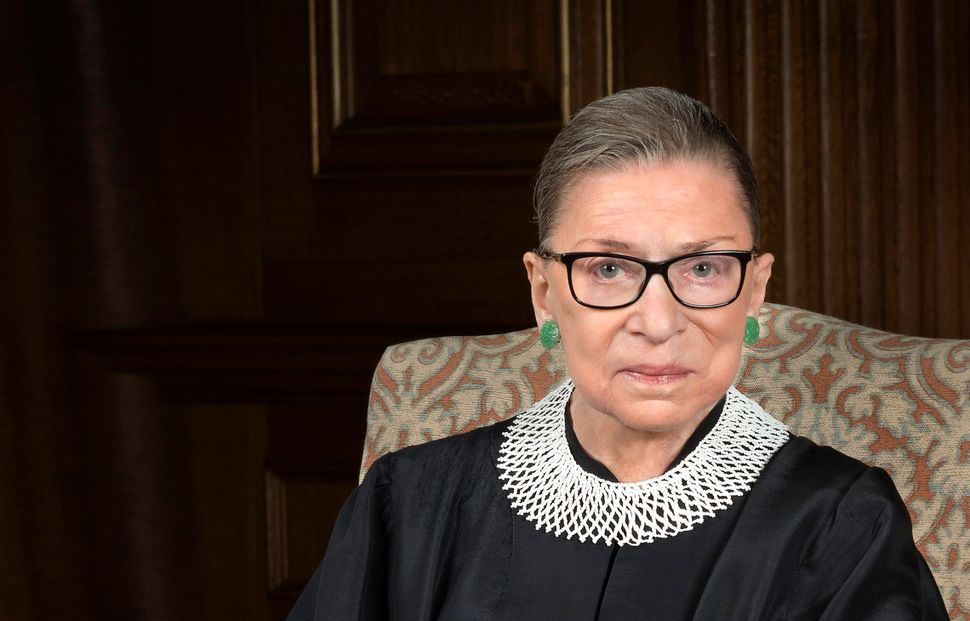 The interview proper begins at 7:11. Click here for the full transcript

Associate Supreme Court Justice Ruth Bader Ginsburg is an icon, a living legend, a hero and a meme.

She was the second woman to become a justice of the United States Supreme Court (that’s what “associate justice” means), where she has served the nation for over 24 years. Through her judicial advocacy for equal rights, Justice Ginsburg has become synonymous with the power of minority dissent. Her gym workout is storied, her neckwear is crisp, and her Jewish identity is strong.

Ruth Bader Ginsburg was born Joan Ruth Bader on March 15, 1933, four days before the birth of Jewish author Philip Roth. Franklin Roosevelt had been sworn into his first term as president of the United States earlier that month. The native Brooklynite was the second daughter of Nathan Bader, a fur manufacturer who came to the United States from Russia as a young teen, and Celia Bader, whose parents had emigrated from Austria before her birth. The working-class Baders lost their elder daughter, Marilyn, just after Ruth’s birthday, and Celia Bader assisted Ruth’s studies and Nathan’s business while struggling with cancer as Ruth aged into teenhood. The family belonged to East Midwood Jewish Center, and Ruth attended Jewish summer camp Che-Na-Wah, where in the summer of 1948 she served as the 15-year-old “Camp Rabbi.” Tragically, Celia Bader passed away from cancer one day before Ginsburg graduated from high school, though not before instilling in her daughter a sense of selfless sacrifice in the face of familial hardship.

Ginsburg (called by her middle name to distinguish herself from the preponderance of “Joans” at her childhood school) attended Cornell University, where she graduated Phi Beta Kappa with a degree in government. She met the man who would become her husband, Martin Ginsburg, on a blind date at school and married him one month after the two graduated from Cornell. The couple decamped to Fort Sill, Oklahoma, after graduation, where Ginsburg supported the family and became pregnant with the couple’s first child, as Martin Ginsburg served in the ROTC and eventually took on active duty in the military. Following the birth of their first daughter, Ginsburg joined her husband as a student at Harvard Law School in 1956. There were nine women in the class, and around 500 men. Nevertheless, Ginsburg raised her daughter, nursed her husband through testicular cancer while helping to manage his course load, and made the Harvard Law Review. After Martin Ginsburg recovered and was hired as a tax lawyer in New York City, Ginsburg transferred to Columbia University, where she was yet again placed on the Law Review. She graduated tied with one other person for top of the class.

Despite her outstanding achievements, Ginsburg faced massive gender discrimination, receiving rejections from all 12 firms she applied to after graduating. When a top Harvard law professor recommended her to a clerkship for then-Supreme Court Justice Felix Frankfurter she was once again rejected, probably due to her gender. Ultimately, she did obtain a clerking position, and went on to serve as a law professor at Rutgers University and then Columbia University, where she went on to become the Ivy League school’s first tenured female law professor. By 1970 she had given birth to a second child, co-founded the country’s first women’s rights-focused law publication, and taught herself Swedish. (What else could we expect?)

By 1973 she had also argued her first case before the U.S. Supreme Court.

During this time, Ginsburg became more and more embroiled in the issue of civil rights for women, founding The Women’s Rights Project for the ACLU and fielding a growing number of sex-discrimination cases. In 1974 she literally wrote the book on sex discrimination law, “Text, Cases, and Materials on Sex-Based Discrimination,” the first-ever textbook on the subject. She went on to challenge unequal drinking ages for men and women in Oklahoma, Social Security benefits denied to widows but not to widowers, and gender inequality in jury summonses. In 1980, President Carter appointed her to the U.S. Court of Appeals in Washington, D.C. This time, Martin Ginsburg followed his wife to a new city for her job.

After 13 years on the Court of Appeals, Ruth Bader Ginsburg was nominated to the office of associate justice of the Supreme Court by President Clinton, in 1993. After confirmation hearings in which she set what became known as “The Ginsburg Precedent” by refusing to answer hypothetical questions about future cases and inquiries into her personal views on certain issues, she became the first Jewish woman ever to serve on the United States Supreme Court. Ginsburg quickly established herself as a brilliant but cautious justice and a champion of gender equality. The many landmark cases that she ruled on include the 1996 case United States v. Virginia. The case found that the tax-payer funded male-only Virginia Military Academy violated the 14th Amendment, which guarantees equal protection. This set a precedent forbidding any law that, Ginsburg wrote, “denies to women, simply because they are women, full citizenship stature — equal opportunity to aspire, achieve, participate in and contribute to society.” Ginsburg also wrote the majority decision in the 1999 landmark case Olmstead v. LC, which ruled that mentally ill people have a right to live in a community rather than be confined to an institution after they have been cleared by a doctor. The same year as her ruling on Olmstead, she was treated for colon cancer without missing a day in court. Ginsburg survived cancer once again in 2009. Tragically, Martin Ginsburg passed away after a second battle with cancer in 2010, just after his 78th birthday.

When Justice Sandra Day O’Connor’s retirement left Ginsburg the sole female member of the Supreme Court in 2006, she became an even more confident voice for women’s rights, particularly the right to a safe and legal abortion, a decision that she said “government has no business making for a woman.” Ginsburg also became revered and feared for her practice of issuing and reading icily spirited dissenting opinions in court. She famously offered a dissent in the historically contentious Bush vs. Gore election recount case in 2000, and issued a spitfire 35-page dissent-heard-‘round-the-world in the 2014 Hobby Lobby case, which, on the basis of religious freedom, allowed businesses to deny contraceptions offered through The Affordable Care Act. As the reserved intellectual and toiling public servant became synonymous with dissent, she was elevated by an adoring young public to the position of pop-culture icon. Canonized by eager young liberals as “The Notorious RBG” (a play on the rapper “The Notorious B.I.G.), Ginsburg’s oversized eye-wear and careful legalese were celebrated by her voracious growing fanbase. Notorious RBG manicures and outsized impressions on “Saturday Night Live” celebrated Ginsburg’s essential mix of cerebral solemnity and spirited pursuit of justice.

As the oldest justice on the Supreme Court in an increasingly uncertain America, Ginsburg has a careful rationality and a blazing sense of what is right, which are needed now more than ever.