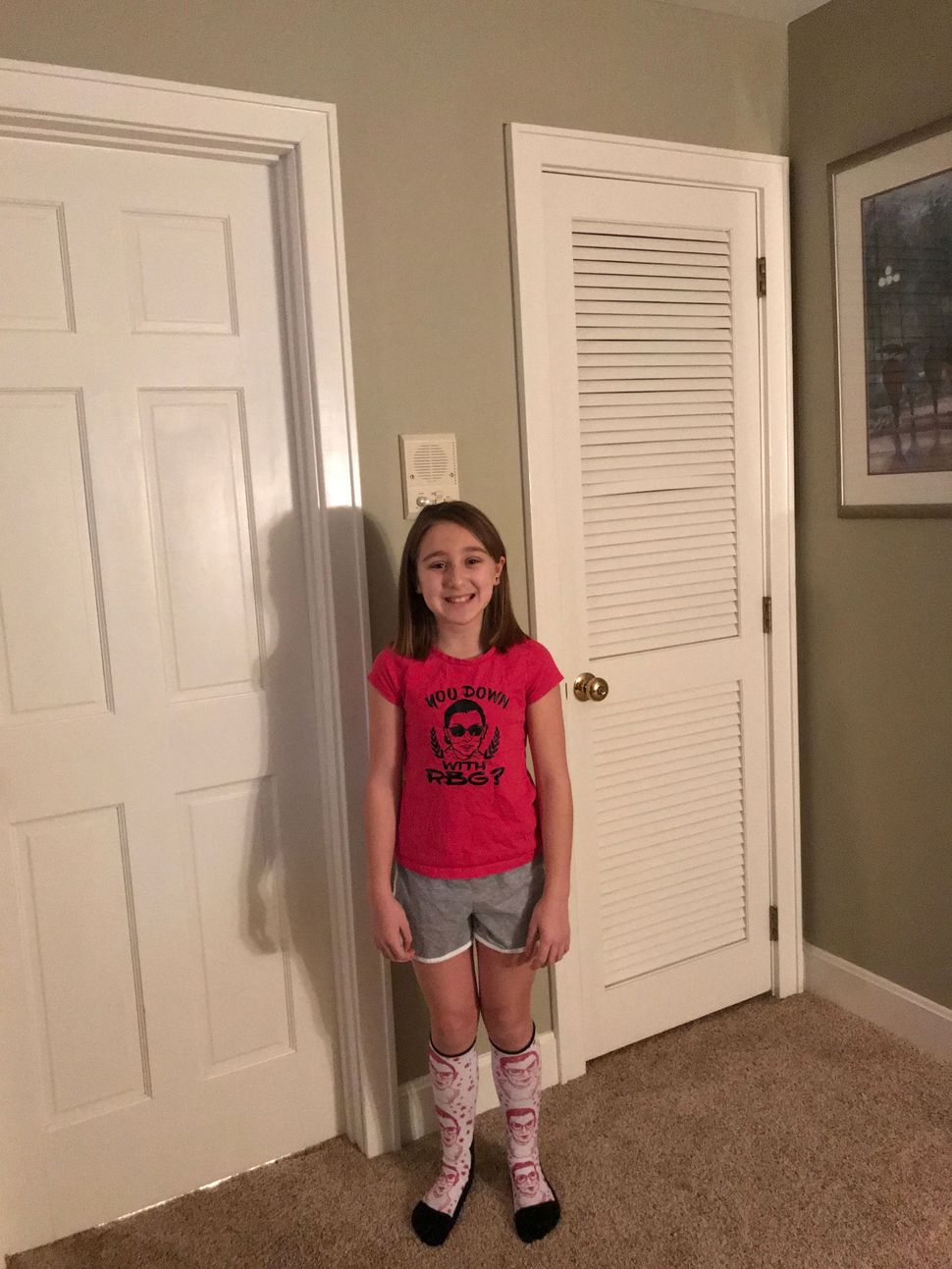 Sitting in front of her mother’s laptop computer, the 9-year-old fourth grader from Evansville, Indiana, watched anxiously. Answering a call to Forward readers to send in their questions, Carly had emailed hers days earlier. Now, she told her parents and brother, she thought there’s a 50% chance her question will get read aloud. “I kept on saying ‘no, she’s not going to answer mine, she’s not going to answer mine,’ and then with two minutes left, she answered mine and it was very surprising,” she recalled. “I was very excited.”

On Friday morning, Carly’s teacher pulled up the video of the discussion, held at Adas Israel Congregation in Washington, D.C., and showed it to Carly’s classmates. “A lot of them just were surprised and said ‘I didn’t know you wanted to be a Supreme Court justice’ and stuff like that.” Her teacher added: “Just keep working on your schoolwork like she said.”

Not every day does a 9-year-old receive personal advice from a justice of the U.S. Supreme Court. But then again, there are not that many 9-year-old girls who choose an 84-year-old justice as their role model.

“I want to grow up to be someone that people remember and that people think that, ‘Oh, she really made a change in the world,’” Carly said in a phone interview Friday. As a judge, she added, “you get to fight for people’s rights and if something is going wrong in the world you can step up and make a change.”

Carly first heard of Ruth Bader Ginsburg from her father when she was no older than five. Since, she read books about her and began to see her as a role model. During last year’s Christmas parade, Carly and her girl scout troop carried signs stating their dreams and aspirations. Hers read: “Supreme Court justice.” Her favorite T-shirt carries an image of a tough-looking RBG. She also has matching knee-high socks with Ginsburg’s profile printed in pink.

And so when Carly’s mother Bridget read about the upcoming Ginsburg interview and the invitation to send in questions to the Forward, Carly seized the opportunity. She wrote that she’s Ginsburg’s biggest fan, shared her aspiration of becoming a justice one day “to support women’s rights and other people who aren’t treated fairly,” and posed a question to the justice: “What can I do now as a 9-year-old to make a change? How can I follow in your footsteps?”

Eisner, the Forward’s editor-in-chief, waited until the end of the 90-minute program to pose Carly’s question. When she did, it was not only the young girl in Indiana who seemed excited. Ginsburg too seemed delighted, calling Carly’s wish to become a Supreme Court justice a “wonderful thing.” She noted how the world has changed for girls since the time she was young. “There’s a difference between the aspirations that young women can have today and what they had in the not-so-good old days,” Ginsburg said. As to Carly’s question, Ginsburg had some solid advice for a 9-year-old wishing to reach America’s top court: Take your schoolwork seriously, read a lot, and do good in your community.

Carly is already doing all of the above. She’s a good student and she loves to read. When it’s not biographies of Ruth Bader Ginsburg, she likes books more popular among kids her age: “Diary of a Wimpy Kid” and “Junie B. Jones.” She also joins her family in helping out at the homeless shelter on Thanksgiving. “It was really inspiring to hear that she really cared and that I can actually make a change in the world,” Carly said of Ginsburg’s advice.

When reading about Ginsburg, Carly, who comes from a Catholic family, learned of the discrimination she had suffered in the past as a women and as a Jew. “That meant a big deal for her and so she made a change about it,” Carly said. “I didn’t think that was fair when people were doing that to her.”

Carly already knows what she wants to change about the world. Her first goal will be ending school bullying. She also knows what her nickname is going to be and it, too, is inspired by her role model. She wants to be known as CRB, just like Ginsburg is RBG.

Until then, Carly Rae Brown will keep learning, reading, playing piano, softball, soccer and basketball and spending time with her brothers, two dogs and a guinea pig. Her only request from the Supreme Court justice she admires is that she stay on the bench until Carly is ready to take her seat.