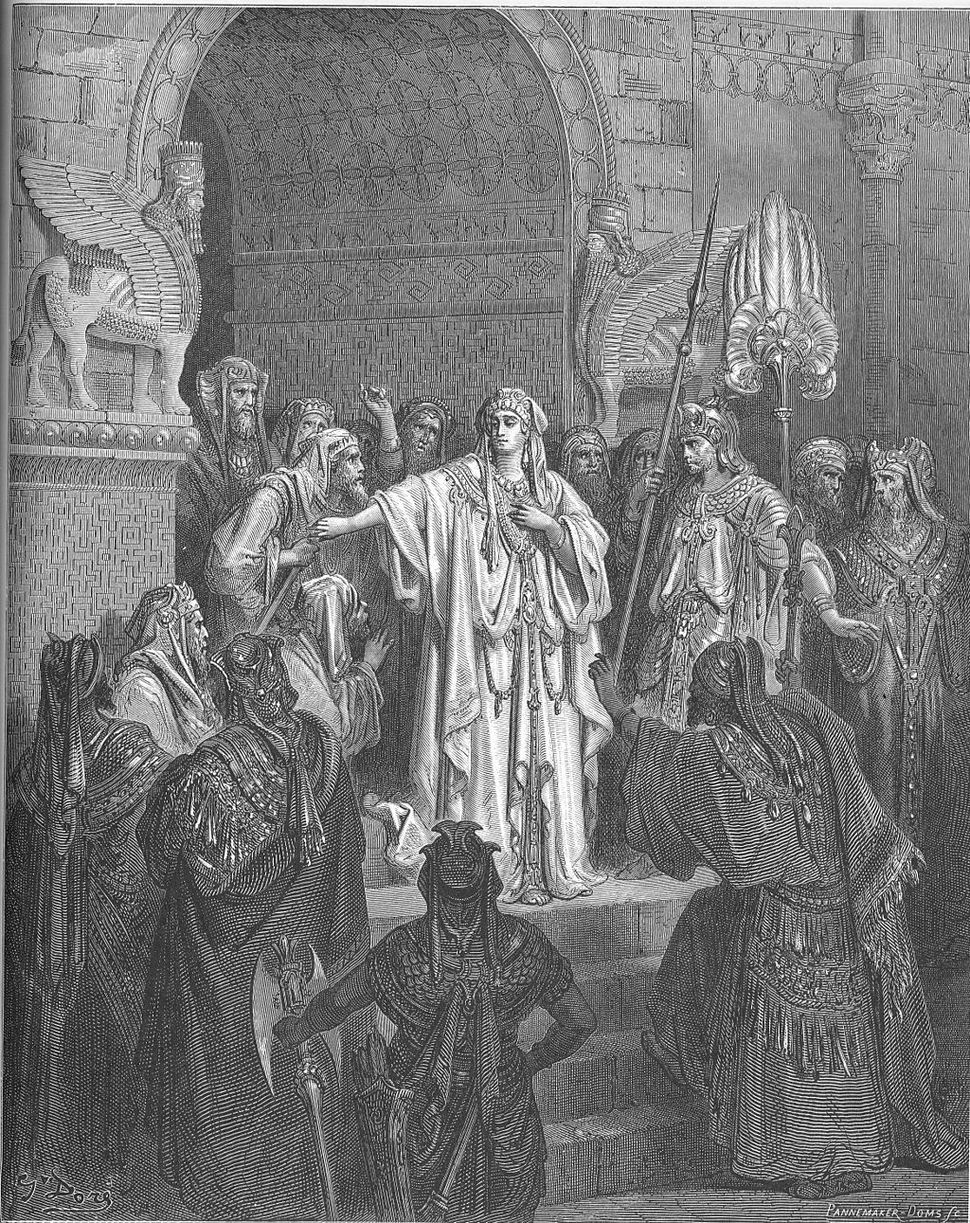 The refusal of Vashti Image by Wikimedia Commons

Every time a scandal erupts around the sexual behavior of a powerful man, someone seems to ask, “Well, why didn’t she say no?” It so happens that the Book of Esther begins with the story of a woman who “says no,” and it demonstrates that the consequences of “saying no” can be severe: Queen Vashti lost the queenship. As Purim approaches, I find myself wondering whether Vashti — that doomed queen who is gone by the first chapter of the Megillah because she refused to let Ahasuerus show her off — was a #MeToo heroine or, at the very least, a pioneer in the language of refusal.

To be fair, I had a bit of prior experience with the idea of Vashti as a role model. Not long ago, my then-4-year-old niece refused to be Esther in the nursery school Purim play, simply because playing Esther meant being at a party with Haman. At the time, I was charmed by my niece’s refusal to play the usual heroine, and moved by her willingness to buck the usual narrative. When I was a child, Esther was portrayed as a flawless-skinned beauty, while Vashti was often drawn on the board as pimply; no one wanted to be Vashti.

But times had apparently changed.

My niece insisted on playing Vashti, and the highlight of her inspired performance at her Hebrew-speaking nursery school came when the boisterous 5-year-old Ahasuerus — in a costume resembling that of a mall Santa, complete with a pillow attached to his stomach with a thick belt — asked her to attend the lavish party he had planned.

No and no, as I understood it.

“No, no!” as my mother understood it, pointing out that it was an idiomatic statement in Hebrew, making the “and” unnecessary in translation.

Or in my niece’s intonation, no and NO.

I was so convinced by my niece’s regal performance that for a while I thought that was what the verse said. But when I looked back at the Book of Esther, in this winter of #MeToo moments, looking for that lo va’lo, what I found instead is that Vashti’s “no” is not reproduced in the text.

Instead, there is simply va’temaen Vashti, or “and Vashti refused.”

But does a “no” have to be spoken? I was curious about the roots of va’temaen, or “and she refused” in Hebrew. The three-letter root — mem, aleph, nun — is also found in Sabaean or Sabaic, Syriac and Arabic. And Sabaean, for the uninitiated, was the language of the Queen of Sheba.

Sabaean is one of many languages that are no longer spoken, and it has been extinct since the sixth century. It was an Old South Arabian language with a relatively long run, and it was spoken in what is now Yemen between circa 1000 B.C.E. and the sixth-century C.E. Thinking of dead queens and dead languages gave me an appreciation for Vashti’s gutsiness. If a language can be relegated to the dustbin of history, so, certainly, can a woman who turns down a powerful man.

Extinction is always a risk.

In Arabic, intriguingly enough, as Avraham Even-Shoshan points out, the root corresponding to mem, yud, nun, means “to refuse,” but the root spelled mem, aleph, nun in Hebrew, and pronounced mana in Arabic, means “lie” — as in “to tell a falsehood.” And it’s fascinating to consider the connection between to “refuse” and to “lie,” especially when some seem to understand a woman’s “no” as “maybe” or even “yes.” Many posters in colleges scream “No means no” from the walls, desperate to translate what shouldn’t need translation.

Perhaps we really do need a dictionary to explain the language of refusal. The Even-Shoshan dictionary tells us that the root in Hebrew also means “refused” or “did not agree,” and it brings several examples from the Tanach to back up this claim. The most familiar is probably the gorgeous verse from Jeremiah 31:15 in which the matriarch Rachel is crying over her children and refuses to be comforted.

In the 1985 Jewish Publication Society translation, the verse reads:

Thus said the Lord:
A cry is heard in Ramah —
Wailing, bitter weeping —
Rachel weeping for her children.
She refuses to be comforted
For her children, who are gone.

The Hebrew for “refuses to be comforted” is me’anah l’hinachem, and the mixture of “m” and “n” sounds emphasizes it. The image of the matriarch Rachel refusing to be soothed has often been set to music, and many songs take advantage of the repeating sounds of those two well-known words.

But the idea that saying “no” to someone with power — and, in particular, power over your life — is dangerous is also, well, well known. The dictionary happens to also quote Bereishit Rabbah, the midrash attributed to the sage Osha’yah, in which a word with the same three-letter root appears, in an intriguing comment on whom one should refuse. Me’maanin b’katan veh’ain me’maanin b’gadol — one may refuse the request of a small person but not of a large (or great) person. So perhaps my niece was right to refuse the request of the 5-year-old playing Ahasuerus, but to risk turning down a real-life king?

Well, Bereishit Rabba, at least, says no. Don’t do it.

Looking into refusal, and Vashti’s wordless but incredibly influential no, sent me back to the verse in which Vashti’s refusal appears in Chapter 1, Verse 12, of the Book of Esther. Ahaseurus’s reaction is quite dramatic, languagewise. Vayik’tzof, the verse says. Literally, “the king frothed.” Translations often flatten this into some version of “He got angry,” but I like this ancient description of fuming — what, in today’s English, we call “frothing at the mouth.” In contemporary Hebrew, katzefet is whipped cream, and it comes from the same root: a froth that can become a sweet topping or a queen-removing furor, depending on its place in the sentence.

So both Vashti’s refusal and Ahaseurus’s anger are wordless in this dramatic verse. And maybe the most important moments in our lives are often wordless; it’s difficult to translate the importance of a wordless no — but it’s a feature of human behavior, from infancy onward, and it’s something that young children excel at. My niece-as-Vashti’s refusal to drink with Haman was evident, even without her lo va’lo. And maybe this is why, when I hear demands that a woman wronged by a powerful man should have said no, I find myself wondering if she already did: wordlessly.

The risks of “saying no” are ancient, and still with us. Unlike so many dead languages, the language of refusal is still very much alive. This Purim, we can consider how refusal changed the course of Jewish history — and we can vow to become more alert to the silent protests all around us, in honor of gutsy queens long gone from the earth.

Aviya Kushner is the Forward’s language columnist and the author of “The Grammar of God” (Spiegel & Grau, 2015). Follow her on Twitter. @AviyaKushner