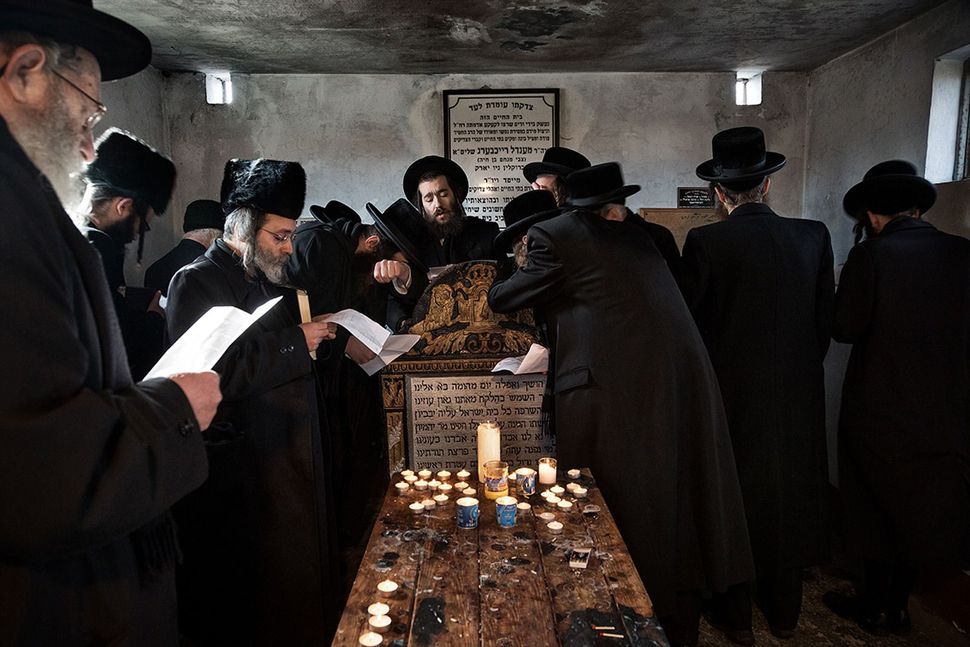 On the coldest day of the year, the Polish photographer Agnieszka Traczewska stands in a snowbound forest an hour’s car ride from Krakow. Dressed in thermal pants and a black scarf, Traczewska has lost track of time in her quest to get a shot of her usually reclusive subjects. Traczewska leans in. Crouches. Shoots.

By the end of the day Traczewska, a Krakow-based documentary producer and photographer, has produced several powerful shots of publicity-shy Hasidim, traditional Yiddish-speaking Jews. Given the distance that many Hasidim put between themselves and outsiders, Traczewska’s photographs are remarkably intimate portraits of the religious reverence that has marked the group since its founding in the early 18th century. Also remarkable is that Traczewska has forged so fervent a bond with Krakow’s Hasidic Jews that even male photographers, who can gain access to the group with much greater ease, do not rival her for artistry or psychological insight. 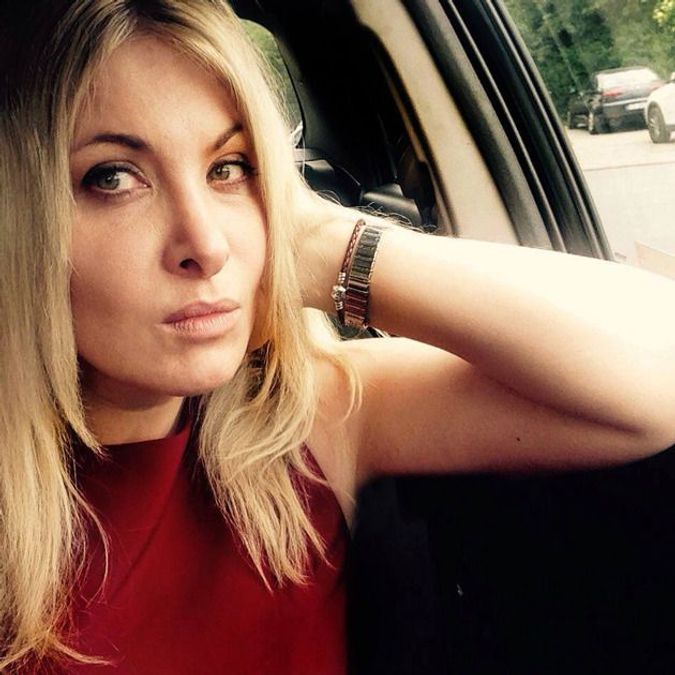 “Sometimes my ‘goya’ looks work to my advantage,” Traczewska said with candor. “Anyone can see I am not a member of the Hasidic groups that come to Bobov, Lelov, Radomsko and the many other places in Poland where tsaddikim are buried. To do my photography, I will inch my way into their circle, and at worst I will receive a glance of disapproval. If I were a Jewish woman, I couldn’t do that. As a ‘goya,’ I am foreign and I am tolerated.”

The self-described “Polish goya with a camera” has become well-known in the Polish towns frequented by Hasidim and other black-hatted Jews known as Haredim. Traczewska recalls an incident four years ago in Radomsko, midway between Częstochowa and Lodz, where some fifty-odd Haredi men were assembled to observe the yahrzeit of Shlomo Chanoch ha-Kohen Rabinowicz.

“I am the only woman standing outside the ohel,” Traczewska said, referring to the rabbi’s open-air memorial structure. “Somehow I have to get there from the cemetery gate. What should I expect? Open confrontation? Admonishment that I do not belong here?”

The mutual respect that has grown up between Traczewska and Haredim from London to Israel helps explain why the pilgrims in Radomsko began to shout when they saw her.

“I told you she would come! What kind of coffee do you want? Would you like a cookie?”

“They heard about the lady who shleps around taking pictures of grave sites,” Traczewska recalls. “They sincerely wanted to be nice.”

By now Traczewska has developed an “approach strategy” based on respect for the Haredi separation of the sexes and on knowledge of relevant halachic issues — “something that the male photographers with their pro forma baseball caps don’t have to think about,” she says. The Hasidim photographed by Traczewska have seen her standing in hip-high snow or swatting at hoverflies. While baffled at first by her determination, they have come to admire it. Many share her belief that a sympathetic portrait of Haredi pilgrimage, prayer and Shabbat observance can show outsiders the beauty and rigor of a Torah-centered lifestyle.

No Pole (or Jew) is an island

Perseverance has been key to Traczewska’s close ties with the Haredim she photographs in Poland, Israel and the United States. Yet persistence alone could not grant her entry into a community defined since the Holocaust by a near-total rejection of secular culture and a commitment to Torah-oriented institutions. For a way into this insular world, Traczewska needed a Haredi comrade-in-arms.

A year or two into her travels, she found those comrades in Duvid and Naomi Singer, a Boro Park couple whose path crossed Traczewska’s in Bobowa, 75 miles southeast of Krakow. In the mid-1990s, the Singers began restoring Jewish cemeteries in the Galicia region of Poland, establishing relationships with local politicians, educators, hoteliers and ordinary people who, like Traczewska, believed that Jews and Poles share a common history and geography. Through the partnership of like-minded souls, the Singers have helped reconstruct cemeteries, mikvehs and even Yeshivat Chachmei Lublin, the grand yeshiva that originated the daf yomi method of daily Gemara study.

“We had been doing our restoration work in Poland for a few years when one day I see this clearly Polish blonde with a camera, and I’m thinking, ‘What’s going on here?’” Duvid Singer said.

“It was a huge surprise to see someone like Agnieszka sitting on the grass, watching us from behind a gravestone,” Naomi Singer said. “It was obvious she was very careful not to be too obtrusive for fear of offending Jews who had come for Rav Halberstam of Bobov’s yahrzeit.”

The Singers were stunned again when Traczewska showed up later that evening at their hotel in Krakow’s once-Jewish Kazimierz district.

“I get a call that a woman is down in the lobby and wants to see us,” Naomi Singer said. “I go down and it’s the blonde lady from the cemetery. She tells me how important it is to her that she met us. Now that she has seen me, she has to see Duvid too.”

Traczewska’s determination signaled the beginning of what Naomi calls “this beautiful relationship.”

Until Traczewska got involved with Duvid Singer’s Heritage and Discovery tour groups, she says she went about her mission blind. “I would go for an hours-long drive, wait the whole day, and come home empty-handed,” Traczewska says. “I was at a breaking point. It was a blessing to find somebody who has all this knowledge about the history of Galicia and the tsaddikim — and trusts me enough to share his group secrets.”

A photographer with Rembrandt’s eye

It can be sublimely powerful when Traczewska has to take her photos, as she often does, from a distance, through windows, doorways and tree branches. 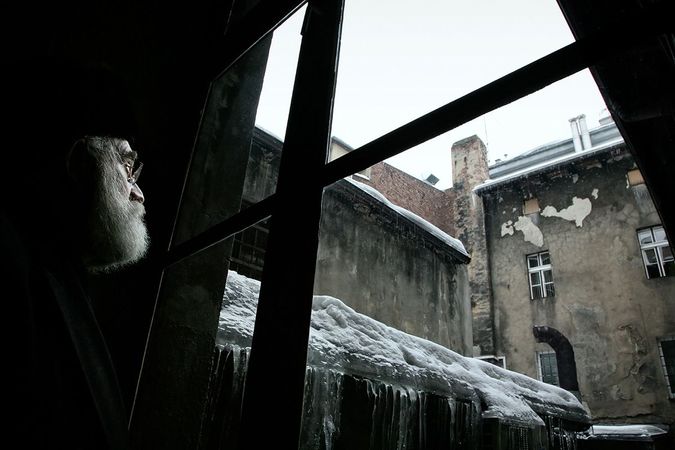 Several of Traczewska’s images are noteworthy for the tense but respectful distance between photographer and subject. In one black-and-white shot of Hasidim trudging through forest leaves to an ohel, a young man steals a wary glance at the camera.

In another photo, Traczewska subdues her presence so that her subjects, a cigarette-smoking bucher and a young boy, contemplate the contents of an old barrel and ignore her altogether.

In some of her most gorgeous shots, Traczewska borrows styles and motifs from paintings. Hasidim draped in tallisim suggest Rembrandt. A Hasid and elderly Polish woman lit up by lantern light could be figures on a Vermeer canvas.

Every so often Traczewska gets the personal shot that nobody else can. 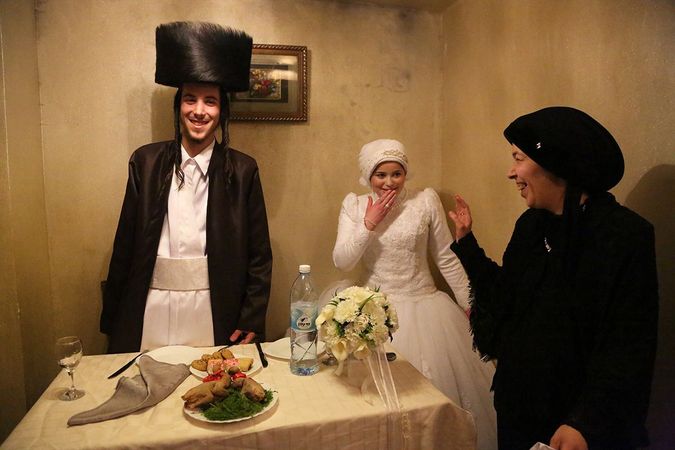 First Time, a photograph taken in Mea Shearim, reveals the rarely-seen first private hour between a newly married husband and wife. The husband, barely out of his teens, wears a shtreimel the size of a lampshade and turns a giddy smile to the camera. His wife, clad in lacy white, titters into her palm. Her black-clad mother-in-law, one hand raised toward the groom, laughs and waves at the young couple. Traczewska says the photo, which some alleged was an invasion of privacy, stirred up a “balagan” among some Haredim until a number of rabbis praised Traczewska for humanizing a frequently disparaged community.

“When I started going to Israel, I made certain to meet an entire family, not just the man, as I did with the Kroyses,” Traczewska says, referring to the family of the couple photographed in “First Time.” “Getting to know the Kroyses’ sixteen children, sharing Shabbos with them and learning about Jewish practice helped us build a feeling of trust and love for each other. Our emotion is there in my photograph.”

Other shots by Traczewska feature her longtime friend Duvid Singer tucked into small knots of Hasidim at cemeteries, ohalim and shuls. Traczewska includes him often as a testament to the friendship possible, despite all odds, between two peoples who shared the same piece of earth for a thousand years.

Barbara Finkelstein is at work on a book about mental illness and housing in the Bronx. She is a regular contributor to the Forverts.