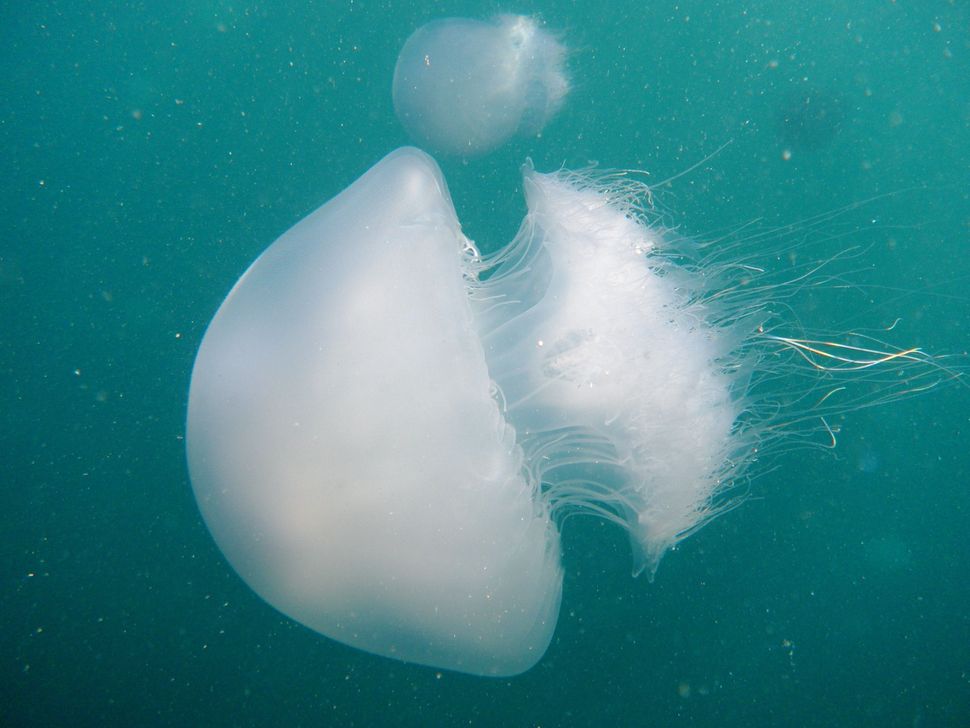 A Jellyfish in Israel Image by Getty Images

Securing Israel’s energy security is no easy feat. But engineers are now having to put up with a new threat to the nation’s power grid: the nomad jellyfish.

The blue-tinted Rhopilema nomadica looks sort of like the lovechild of a mushroom and a very large plastic bag. The species made its first pilgrimage to the Holy Land in the 1970s. After the Aswan Dam plugged the freshwater flood of the Nile river, which had acted as a barrier to saltwater species, the Indian Ocean natives hitched a ride through the Suez Canal and found a new home in the Eastern Mediterranean. When they arrived, they displaced the frilly-mouthed jellyfish.

Each summer, the creatures “bloom” off the coast of Israel in the thousands, frightening and sometimes stinging Israeli bathers. But they represent more than an icky nuisance for the Israeli Electric Corporation, which operates Rutenberg Power Station, situated south of Tel Aviv, in Ashkelon.

The coal-powered plant harnesses millions of gallons of seawater per hour to cool its massive turbines. Even with grates to block its formidable water intakes, Rutenberg can barely handle a jellyfish bloom. Thousands of the slimy animals create a swarm, clogging the system so badly that workers must remove them from the filtration system by the ton — one truckload at a time. Beyond the extra labor they necessitate, these jellyfish often come close to stalling operations at a time when Israelis most need their air conditioning.

Addressing the dangers created by jellyfish is no joke. Nomads and other species of jellyfish have created massive problems for the humans, who rely on water and marine life for power, sustenance and revenue: The jellyfish clog water intake screens at desalination plants; they reduce visits to Israeli beaches by as much as 10%, according to a study by the noted Israeli marine biologist Bella Galil; they threaten to decimate the populations of fish farms, as in Scotland, where a quarter-million salmon were wiped out by “mauve stinger” jellyfish.

Frustrated by the plague of jellyfish, some Israeli scientists have attempted to predict why the nomad blooms in certain conditions. They have tried to find correlations between jellyfish blooms and the location of the moon, the temperature of the water or the wind’s speed.

I spoke recently to Juli Berwald about the causes and consequences of jellyfish blooms in the Mediterranean. She’s a marine biologist whose book “Spineless” came out in November 2017. Berwald wrote “Spineless” after spending years trying to figure out how “overfishing, coastal development, and climate change were contributing to a jellyfish population explosion.”

Why has this plague descended upon Israel’s shores? According to Berwald, much of the damage caused by the nomad jellyfish — along with the 400-plus other species that have entered the Mediterranean through the Suez — is a result of the complete lack of ecological precautions taken in building both the canal and its recent expansion, which was completed in July 2015.

Species from tropical climates are “often more opportunistic, or have a wider range of conditions in which they can survive” than their nontropical counterparts, she said, Predictably, then, when these species entered the Mediterranean via the Suez, they radically altered the ecosystem, creating new problems for humans and marine creatures alike. When the canal was expanded to double its capacity, they simply entered more rapidly. It is “impossible to say,” she said, how this expansion will impact the ecosystems of the Mediterranean.

Disappointingly, Berwald said, despite four separate international treaties stipulating that an environmental impact assessment was necessary before construction of the canal, no assessment was ever undertaken.

The Egyptian government has refused to acknowledge that its expansion of the Suez is having, or will have, an adverse effect on Mediterranean ecosystems. Yet, the Egyptian coastline is not immune to the nomad’s bloom. When a massive bloom took place on its northern shores, angering vacationers and activists, the Egyptian government denied the occurrences before releasing a bland response citing “pollution, high temperature and hunting of sea turtles” as factors causing the nomad’s most recent bloom. No acknowledgment was made of the effect of the canal’s expansion on the nomad’s increasing prominence in the Mediterranean.

Meanwhile, in Israel, scientists have made the best of the jellyfish infestation. One Israeli startup, Cine’al, is attempting to use dried jellyfish carcasses, composed of 95% water, to create super-absorbent bandages, tampons and diapers. Another, Safe Sea, has created an effective sting block. Scientists there even studied the effectiveness of jellyfish stingers as a drug delivery device before turning their attention to sea anemones.

For all its flaws, Berwald said, Israel is an “innovation center… so they’re confronted with jellyfish and they’re like, let’s come up with solutions.”

Sam Bromer is the Forward’s culture intern. Contact him at [email protected]