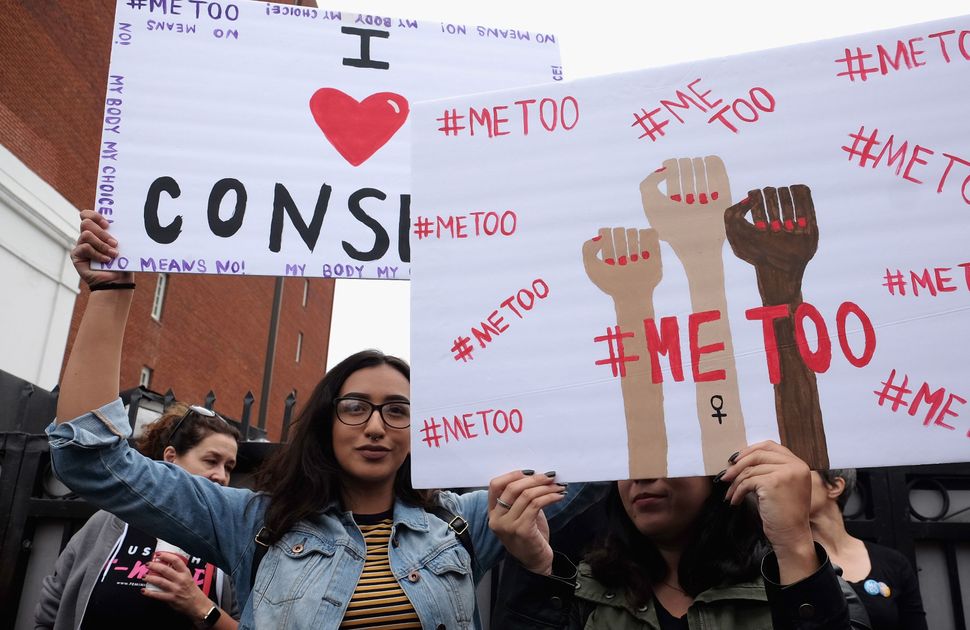 “It felt so unusual to hear women talking publicly about things that women talk about with friends,” Chana Joffe-Walt said.

Joffe-Walt, a producer for “This American Life,” was discussing an episode of the show that had just gone viral. She had constructed the episode, titled “Five Women,” after months of painstaking reporting, and it had made an impact: Listeners and critics seemed to agree that it marked a breakthrough in the way that the media approaches stories about sexual harassment.

“Five Women” tells the stories of a group of women as they assess their difficult experiences with one man: Don Hazen, the now-former executive editor of the liberal news site AlterNet. He resigned from his position after a December BuzzFeed article reported that five current and former AlterNet employees had accused him of sexual harassment.

Some of those former employees — named Deanna, Onnesha, Tana and Kristen — are featured in “Five Women”; so is Hazen’s partner of two decades, Vivian. Vivian’s inclusion alongside women who allege Hazen sexually harassed them is a marker of the episode’s breadth, but also of its remarkable curiosity about the landscape of experiences that inform how women experience and react to sexual misbehavior. Vivian, upon first learning of the allegations against Hazen, reflects with regret on an incident early in her career in which she passed judgment on a group of young women seeking the attention of an older male supervisor. She reflects, as well, on why she thinks she will stay with Hazen despite new revelations about his behavior that fundamentally changed her understanding of their relationship.

The complex range of reactions she balances is characteristic of each woman featured in the episode. The concerning interactions with Hazen that Deanna, Onnesha, Tana and Kristen describe are disparate yet connected, running the gamut from a potentially exploitative comment made during a salary negotiation to Deanna’s allegations that he violated sexual norms during a five-year affair they had in the early 2000s.

I spoke with Joffe-Walt about the process of reporting “Five Women,” and what she thinks it might signify for the #MeToo movement. The following interview has been edited for concision and clarity.

Talya Zax: Can you start by telling me about how you came to this story, and how you went about reporting and constructing it?

Chana Joffe-Walt: I watched this episode of the series “I Love Dick” called “The Short History of Weird Girls.” It breaks from the plot of the show, and the four main characters one-by-one describe the history of their sexual lives, mostly the history of their sexual desire. They’re all connected through this one man called Dick. I just found it stunning. It felt like you got a different kind of information about who they were, and why they were the way they were.

That was at the same time that the first round of Harvey Weinstein stories was coming out; you’re hearing this one slice of one woman’s experience with one man. [Then] The New Yorker had their first story about Weinstein, and this actress talked about being assaulted by [him] and then having a consensual relationship with him. I was floored that that was included and that she had insisted on including it. I felt like there were these little hints in a lot of the #MeToo reporting that there was more that the women wanted to say.

I had seen an article that Rebecca Traister wrote, where she talked about being in the position of the reporter who writes about this a lot hearing from women who had their own bad experiences with bosses and having to say to them “I’m sorry, but your guy’s not famous enough.” Also, she mentioned that she’d heard from some groups of women who had found one another and collectively been ready to bring their story forward. I asked her to send [something] to people who might be interested in talking to us. I was excited by the idea of women who knew each other, at least a little bit, and had an experience with a single person.

I think the thing that I feel, as somebody who’s making stories, is there’s more information to be had. The template we have for telling these #MeToo stories is one way of talking about a problem that is vast. Even though those stories are powerful and valuable, they’re limited in how much information they can have. Hearing from people who are actually harmed by the behavior, and how they’re harmed, has more information. We’re trying to understand a problem by looking at it in this limited frame. I’m excited about the idea of pointing the lens elsewhere.

Were there themes in the women’s stories that surprised you?

There are so many. Other women who worked there, who were not harassed by Don, talked about how much it affected them. [One] woman who I spoke with who worked there said “I just wish he had sexually harassed me so I could do something about it.” That feeling of frustration was really interesting to me.

What has the response to the show been like?

There’s a few messages that I got from people who had experienced workplace assault or harassment years ago, and talked about letting the organization or business that they’d worked at know that had happened to them and not having any formal response, and feeling like that was both confusing and frustrating. That really stuck with me. Somebody talked about wanting an acknowledgment, or curiosity about what happened to her, or a sense that we could do something organizationally to change the climate that allowed that to happen. What happened instead was that they had mandatory sexual harassment training and nobody ever talked to her.

Another thing that’s remarkable about this episode is that it shows something of the way in which sexual harassment affects women as a group, not just as individuals. Can you tell me about how you chose to draw that story out, and what you hope people take away from it?

I had already been thinking about groups of women, just because so many of the stories were oriented around workplaces. It would be a way to focus attention, that would allow you to hear from a bunch of people but not feel like it was a survey of all women. I understand why #MeToo stories are reported the way they are; I think one thing that they aren’t able to do as well, when they’re oriented around a single man, is to talk about the variety of experience that different people have, and ask questions about why that may be. That felt like that wasn’t totally coming through in news stories that are more oriented around building evidence of a specific behavior. I wanted to paint a portrait of women’s experiences.

At the end of the episode, you mention that AlterNet’s internal investigation of the accusations against Don Hazen did not and would not include conversations with the women who alleged that he had harassed them. When, in your process of reporting this, did you learn that? Did that knowledge impact the way you viewed the story you were trying to tell?

I learned that fairly late. I was reporting the story when the BuzzFeed article came out, and I knew that they gave [Cora Lewis] a statement that said that they were doing an investigation. A few weeks ago I went and asked all the people I had talked to, and no one had heard from them. I became kind of focused: What is the scope of the investigation? The investigation they did do was with an outside contractor who spoke with every person who works there now and two people who recently left, and they found that there was not any issue with sexual harassment, I asked if they had reached out to the other women, and I think they felt like the only action that could come from that was that they would fire Don, and he had already resigned.

It became a profound thing that I felt kind of underlines the show. The show is making an argument that it’s important to talk to and hear from the people who claim that they’ve been harmed by the behavior that we’re all suddenly, publicly concerned with. You have to understand what the harm done was. It seemed like they were doing an investigation that completely ignored the people who were saying “Harm was done.”