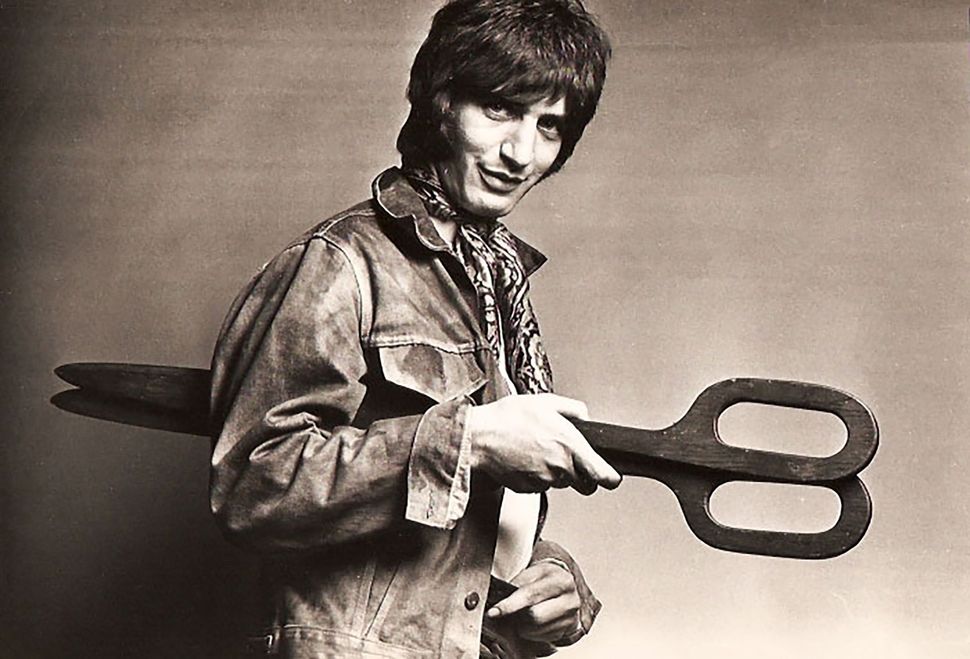 It was early June 1967, and Leslie Cavendish faced a rare dilemma: War had broken out in the Middle East, and the very survival of Israel seemed at stake. For Cavendish and his friends in London, the possibility that Israel might be destroyed touched something deep inside their Jewish hearts, and they all felt the pull toward signing up to volunteer to aid the war effort however they could.

Cavendish first went to his employer — a very sympathetic Vidal Sassoon, who himself had heeded the call to defend his “homeland” in 1948, when he joined the Haganah at age 20. Sassoon assured Cavendish that whenever he came back, he would still have a hairdresser job waiting for him.

But that wasn’t the hardest part. Cavendish also counted among his clients one of the most famous celebrities in the world, one to whom he grew close enough with to be considered part of his inner circle. His client also happened to have one of the most famous heads of hair in the world, which had been entrusted exclusively to Cavendish’s care just a year earlier. So before he made his final decision to go off to Israel, Cavendish motored over to his client’s home to make sure that he, too, would be okay with his hairdresser taking an open-ended leave of absence. And when he explained the situation to Paul McCartney, not only did the Beatle assure him that he would remain his go-to hairdresser, but McCartney — who has had two Jewish wives and several close business associates who were Jews — gave Cavendish his blessing.

This is just one anecdote in “Cutting Edge: The Story of the Beatles’ Hairdresser Who Defined an Era” (Alma Books) a brand-new memoir by Cavendish that is jampacked with tales of life with the Beatles and other glimpses of the swinging ’60s fashion and music scene in hip London. It’s an intimate, well-told rags-to-riches tale of a Jewish boy’s journey from the working-class East End neighborhood of his youth to a life in the fast lane, rubbing shoulders with the upper crust and rock ’n’ roll royalty in Chelsea and Mayfair, where Cavendish wound up working and living once he got his big break from Sassoon — himself originally a product of the East End.

Now, to be clear, Cavendish was not the man who invented the Beatles’ most famous ’do — the shaggy moptop that gave them the cuddly look that caused millions of girls (and boys) around the world to swoon over them when they first hit it big in the early 1960s. Credit for that style devolved to Astrid Kirchherr, a photographer they befriended while playing one of their extended nightclub runs in Hamburg, Germany.

The task of designing a new Beatles look fell to Cavendish in 1966, after the Fab Four said farewell to the road and to living in each other’s pockets, settled back down in England and for the first time kicked up their feet and relaxed, each in his own home, without the sartorial responsibility that came with living in the public eye on a daily basis. Cavendish was working at Sassoon’s salon one morning when a well-known English actress and regular client of the studio popped in to have her hair done. Her usual guy wasn’t in that day, but Jane Asher was a familiar face around the salon, and Cavendish wound up cutting her hair that morning.

When he was done, Asher asked him casually what his plans were for later that day.

“I’m probably going to go ’round and watch some football,” he replied. “Why?”

“Well,” Asher said, “I was wondering if you might be able to come by the house and cut my boyfriend’s hair.”

Asher didn’t have to name the boyfriend. That was public knowledge. In the discreet world of Sassoon’s salon, where the boss inculcated in his staff an abiding sense of propriety and discretion, such a fact wouldn’t ever have been acknowledged unless Asher herself were to mention it.

“Sure, I can do that,” Cavendish said, not quite believing what had just transpired.

“Here’s the address,” she said, handing him a slip of paper. “I’ll tell him you’ll be by around 4.” Cavendish actually did go see his beloved football match that afternoon, and then took a spin over to the house. He was buzzed through the driveway gates, parked his car next to a green Aston Martin — the only other green one belonged to James Bond — strolled up to the front door and rang the bell.

The door opened, and a shaggy, bearded McCartney stood in the threshold.

“Do you take sugar in your tea?”

“So we’re sitting there,” Cavendish told the Forward in a Skype interview from London, “in the front room. I’m saying to myself, I’m sitting in Paul McCartney’s front room. I’m a Beatles fan. I’m thinking to myself, keep your cool, Leslie, don’t blow it. Don’t ask loads of silly questions, like ‘Can I have your autograph?’ or ‘Can I have a memento?’ We just sat there. He made me feel very relaxed, which was a really good thing. It was only until after we’d finished our tea when I said, ‘Shall we go upstairs and cut your hair?’”

What to do with Paul’s locks was pretty much left up to Cavendish. He basically worked with what was in front of him, a full head of bushy long hair, and trimmed and neatened it, still allowing it to express McCartney’s individuality. He eventually did the same sort of thing with the bushy heads of McCartney‘s bandmates – John Lennon, George Harrison and Ringo Starr. For a frame of reference, think “Sgt. Pepper’s Lonely Hearts Club Band” more than “A Hard Day’s Night,” and you’ll get a sense of what Cavendish was doing with his scissors.

After a while, Cavendish found himself to be an official member of the close-knit crew of the Beatles fraternity, which otherwise consisted almost entirely of lifelong friends brought down from Liverpool — the only people the Beatles thought they could truly trust.

“Suddenly this East End Jewish guy is part of the scene,” said Cavendish, who noted that he never heard nor felt a whiff of bigotry from anyone. “It didn’t bother anyone. I didn’t hear any anti-Semitism. No one ever said anything in front of me.” Not even Lennon, who is thought to have promiscuously dealt out all kinds of racial and sexual epithets?

“I met Lennon on quite a few occasions, and even cut his hair,” Cavendish said. “[Beatles manager] Brian Epstein, yes, he was Jewish, but he was also gay. Words were used, people used to call people names, which seemed to be accepted back then.” Lennon notoriously once suggested that Epstein change the title of his memoir, “Cellar Full of Noise,” to “Cellar Full of Boys.”

“I got called a Jewboy at school, a Yid, but I never heard anyone use those terms,” Cavendish said. “I might have heard Epstein called a ‘poof’ or something. I never once heard ‘the old Jewboy.’ I just think… there was one little thing that Lennon said about [Epstein], maybe he referred to ‘that Jew manager of mine.’ But that’s nothing. I never felt it, and if I did I would have said something.”

After the Beatles split at the end of the decade, Cavendish continued to cut their hair on occasion. Starr’s then-wife, Maureen Starkey, was a hairdresser, so she mostly took care of his hair. Harrison would often come into the Apple offices (the Savile Row business headquarters of the Beatles) from his beloved country house, Friar Park, and Cavendish would come around to tidy him up. At the urging of Yoko Ono, Lennon soon moved to New York City, but Cavendish continued to cut McCartney’s hair — as well as Linda McCartney’s and the couple’s daughter Heather’s — until the family moved to Scotland. Eventually, the pull of family obligations and nostalgia for his origins found Cavendish working back in the East End Market, where his family had owned a shoe shop for several generations. He applied some of the lessons he’d learned about retailing and fashion when his Apple-backed hair salon was located inside an Apple-backed clothing emporium, and Cavendish wound up being one of the first official suppliers of Dr. Martens boots just as it was being adopted as part of the uniform of the nascent punk-rock scene.

As an early and ardent Beatles fan, Cavendish had in fact been up close to McCartney four years before he went round to cut his hair. Paging through The Jewish Chronicle in 1962, he saw an ad for a “Jew-do,” as Jewish-sponsored youth events were called, featuring a number of bands, including a then little-known group called the Beatles. Cavendish and a few friends attended the show, which made him even more of a Fab Four fan. But never in his wildest dreams did he imagine that someday he’d count any of them as clients, much less as close, personal friends.

“I like to say I won the Beatles lottery,” he said.